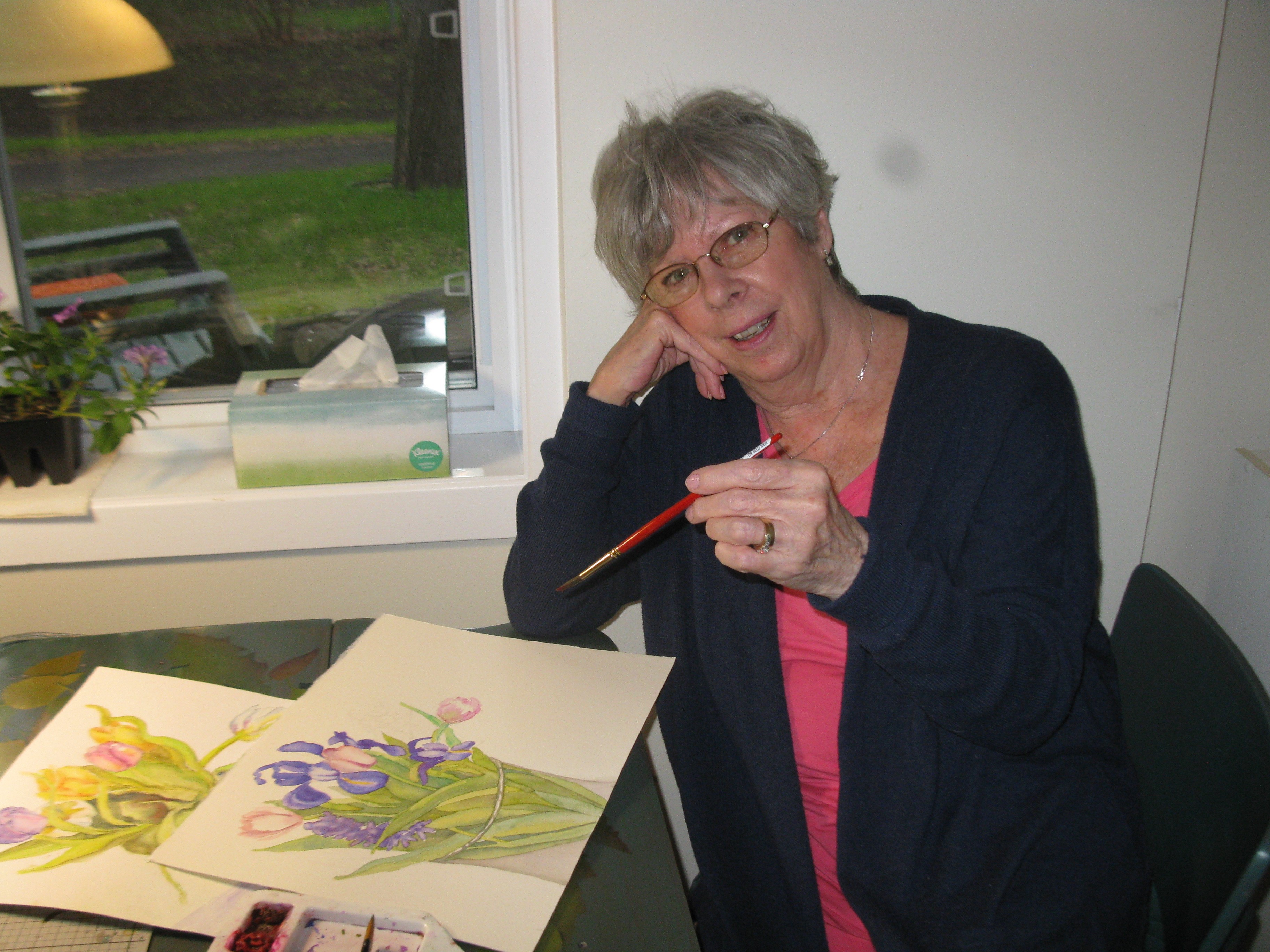 Fran Bailey at work in her studio.

Fran Bailey has been drawing and painting for as long as she can remember.

“I always knew I was an artist,” she says. “I attended my first kids’ art class at MacDonald College when I was five.” The results of that training and the many other artistic influences in her life are currently on display at the Champlain Library and the Trillium Tea Room in Vankleek Hill.

Bailey’s preferred medium is watercolour. “I love the transparency of it,” she says. “You can see through the colour to the paper.” She loves stained glass for the same reason. She also jokes, “With watercolour, you don’t have to do a lot of clean-up afterward.” She has recently been experimenting with a new watercolour technique, which doesn’t require glass or matting to be displayed, making watercolours more affordable and accessible.

One of her specialty areas is house portraiture. She has been commissioned to paint more than 100 houses, many in Hudson, Quebec where she lived for more than 20 years, 15 of them running a decorating shop with her husband George, called Centre Décor Hudson. Her work was displayed in the store and sold steadily. She recently participated in a show at the Arbor Gallery in Vankleek Hill called the Houses of Vankleek Hill, where her three house portraits sold.

Finding an arts community in Hudson

Hudson also played a large role in her development as an artist. One of her mentors was Lesley Coppold, RCA who taught the Artistes Hudson Artists group. The group was originally founded in the 1920s and was called the Lake of Two Mountains Sketch Group. Quebec’s language law forced the group’s name change and for four years, Bailey was president of the group.

Bailey originally trained as a teacher, working for seven years as a grade school teacher and 12 years as a supply teacher. “But I introduced art into every subject I taught, including math,” she says. She now offers classes in watercolours, in which she explains colour theory, lost and found edges, negative space and preserving the white paper.

Although watercolour is the medium she uses most, Bailey also makes art in oils, acrylic, pen and ink, mixed media and fabric. She has been influenced by illustrators like Arthur Rackham and Maurice Sendak and admires realist painters such as Tony Onley, Ken Danby, Georgia O’Keefe and Andrew Wyeth.

To view Bailey’s work, visit the Champlain Library and/or the Trillium Tea Room during opening hours. To enquire about watercolour classes or to commission a house portrait, you can contact her at [email protected].