Montpetit Street needs work, says resident, even if it is not owned by the township 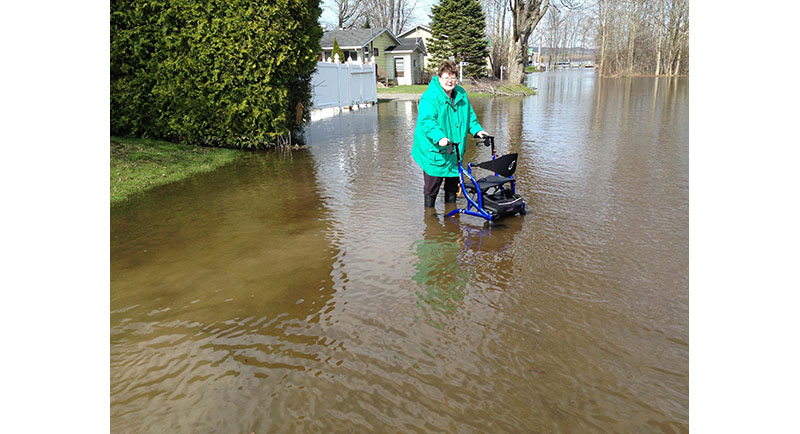 Bronwen Williams had just returned home after being evacuated for 10 days when heavy rains caused the Ottawa River to rise again.

Montpetit Street resident Bronwen Williams says she should not have had to evacuate her home for 10 days during recent flooding. And she says that after 35 years with no improvements to Montpetit Street, it is time for change.

The L’Orignal resident contends that Montpetit Street should be built up and raised. The street flooded in 2017 and residents had to be evacuated. Residents on the house-lined street, located close to the Ottawa River, had to be evacuated again in late April of this year, due to flooding. After being away from her home for more than one week, she returned home May 6.

But on Friday, after another round of heavy rain, Williams says she was trapped in her home because the street flooded. She had just returned from a 10-day stay at McGill Manor after Champlain Township helped her leave her residence more than a week ago, when the water levels of the Ottawa River put Montpetit Street, but not the houses along it, under water. That 10-day stay is not something she can afford, she says.

But fixing the road is not up to the township. Montpetit Street is privately owned, by retired engineer and developer André Desjardins.
Desjardins says he wanted to give the street to the Village of L’Orignal decades ago (prior to municipal mergers in 1997).
He says that he also has given additional land to the existing right-of-way to make it 66 feet wide and gave the municipality land at the end of the street for a turnaround for the snowplow.
Desjardins says he is willing to pay the costs of transferring the property to the municipality, but he knows the right-of-way needs considerable work. The asphalt surface had been built up but has a layer of shingles underneath and that is not recommended for roads, Desjardins said.
The property was developed back in the mid-1980s, Desjardins recalled, when the late Lucien Berniquez (former mayor of Hawkesbury) built a house there. Most of the Montpetit Street homes are year-round residences, but some of the homes on the low point of the road were originally cottages, later converted to year-round residences.
Such is the case for Gérald Hoffman, who has been living on Montpetit Street for about 21 years; his mother has lived in her Montpetit Street home for about 65 years, he said.
“We pay the same taxes as everyone else; I don’t think we should be responsible for the street improvements,” Hoffman said, adding that as a developer himself (nearby Hoffman Crescent), he had to have an acceptable street in place before selling one property to a buyer.
Hoffman doesn’t understand why the poor condition of Montpetit Street is allowed to continue.
In the meantime, Hoffman will be making changes to his home in anticipation of more floods in the years to come.
“I’m going to do what I can. Lift it up … do something. In 2017, they said it was the kind of flood that happens once every 100 years. But here we are in 2019 and we have another flood,” Hoffman pointed out.
Champlain Township Public Works Director James McMahon says that despite the township not owning the land, it does snow removal and some grading and gravel application to the street. He says that Dufour Street also gets the same services from the township.
It has always been that way since he began working at the township, McMahon said, adding that these two streets seem to have fallen between the cracks, referring to another private road situation where landowners have formed an association to pay the township for snow removal and road work.
McMahon acknowledged that the Montpetit Street situation was really bad because the road is very low.
Williams says she returned home on May 6 via a pick-up truck, but contends that her home suffered no damage and that she had been prepared for the flood.

After Friday’s rain, Williams said the water was about five inches deep in front of her house but was about a foot deep further down the street.

“We pay taxes, and we have addresses recognized by the post office, etc.  It is not like we are living in a laneway in the forest somewhere,” Williams said. She acknowledged that the municipality sends a road grader every three months or so — “when the pot holes get so bad that it is difficult to drive on the road.  They also plow the snow whenever necessary and put salt and sand when necessary – and they do a great job of that. They also pick up the garbage once a week,” she said.
But every time the grader passes, the road would get a bit lower, and lower than the lawns on each side of it, Williams says.
“This is why the snow melt this year did not run off but formed small lakes on our road.  This was before the flood.  Now, everyone’s lawns are mostly dry and the road is like a river because it is too low,” she argues.
Williams thinks that the road level has to be higher, which could mean residents might have to change their driveways to have them slope down and away from the road instead of sloping up to the road.
Williams says she has paid several thousand dollars of her own money to pave the road in front of her house so people would not have to get out of their cars onto a mud road if it was raining.
The bottom line for Williams is that she does not want to be evacuated again.
“It was very upsetting to me and my cats, and I can’t afford any more almost $100/day charges.  As long as my sump pump keeps running, I’m okay,” she ended.