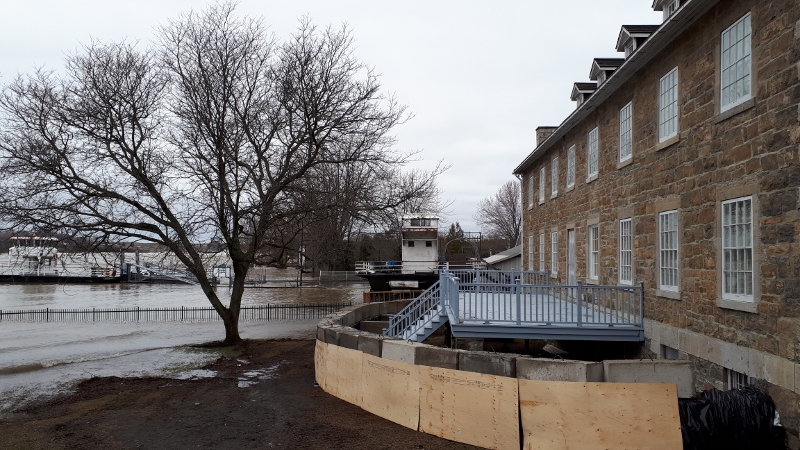 Flooding behind the Caserne-de-Carillon in April. Photo: James Morgan

St-André d’Argenteuil continues to respond to the flooding that has affected the municipality for the past three weeks due to high water on Rivière du Nord and the Ottawa River.

“The situation is better,” said Mayor Marc-Olivier Labelle, but the state of emergency remains in effect.

He said 240 people were affected by the flooding.  Most found temporary accommodation on their own, but some are staying at the emergency centre that remains open at the Kevin Lowe/Pierre Pagé Arena in Lachute.

While many private homes and businesses in St-André d’Argenteuil were affected, the basement of the historic Caserne-de-Carillon was flooded, but no items in the museum’s collection were touched or damaged.  The public library, located in the basement of St-André-Apôtre church, next to Rivière du Nord, was fortunately not harmed.

In Lachute, the flood situation, which had seen Rivière du Nord rise onto properties in the area north of the downtown, has improved considerably.

He explained that the city is helping residents complete application forms for provincial compensation, and that a few of the affected residents are still using the emergency centre at the arena.

Péloquin said water only entered the basements of homes and did not reach the first floor.

However, floodwaters shifted the basements of four or five houses and those buildings will need to be inspected before residents can return.

The streets in the flood area have all been cleaned.  Péloquin said the city is gathering volunteers to help clean up yards for property owners who may not be able to do it themselves.