Wood Brothers Brewing partners have a passion for beer 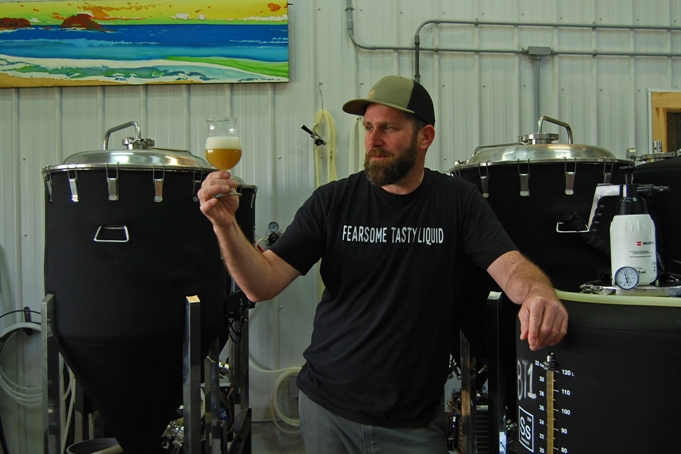 Brewer Louis Castonguay pauses to inspect a batch in progress

Great elation accompanied the tapping of Wood Brothers Brewing’s first keg at the Jet Set Pub in Cornwall’s Nav Centre April 12. Before the evening was over, Highland Haze, the brewery’s signature New England-style IPA, was sold out.

The enthusiastic response to Wood Brothers’ release party was just what the small craft brewery needed, after persevering through an arduous regulatory process.

Wood Brothers Brewing occupies a small building on Wylie Road in Glen Robertson, rubbing shoulders with White Pine Lumber. Mark and Natasha Rickerd, along with partners Louis Castonguay, Dan Whitehead, and Kurt MacSweyn, have used their time well during the two-year wait for regulatory approval for the brewery.

“We’ve brewed about 150 batches,” says Mark Rickerd. Even though they couldn’t sell beer, the delay allowed them to perfect their recipes. Rickerd says Wood Brothers is striving for innovation in flavours, to keep up with the demands of the market.

They followed up their successful debut by introducing Nowhere Ride, a medium-bodied IPA with notes of ripe citrus and herbal spice, at Esca Gourmet Pizza in Cornwall on April 18.

Now that Wood Brothers Brewing is licensed to sell its product, the partners are looking forward to opening the brewery’s taproom this June. They plan to have up to eight varieties of beer on tap, and offerings will change week by week. The taproom, with its adjoining covered patio area, will be open most Saturday afternoons this summer, and plans are also in the works to make it available for private parties.

Similarities to New England don’t end there. Craft brewers in the U.S. start small and stay small, according to Rickerd, and Wood Brothers Brewing used that as their model.

Small is fine with the Wood Brothers team, who all have full-time jobs. Each barrel takes six to eight hours to brew, and Wood Brothers doesn’t have the capacity to fully furnish demand. For now, they’re pleased to be what they believe is the smallest brewery in Ontario—and the only one in North Glengarry.

Until its taproom opens, thirsty craft-beer aficionados can sample Wood Brothers’ brews on selected evenings in Cornwall at the Jet Set Pub, and at Esca Gourmet Pizza. Brew availability is posted on Wood Brothers’ Facebook page.