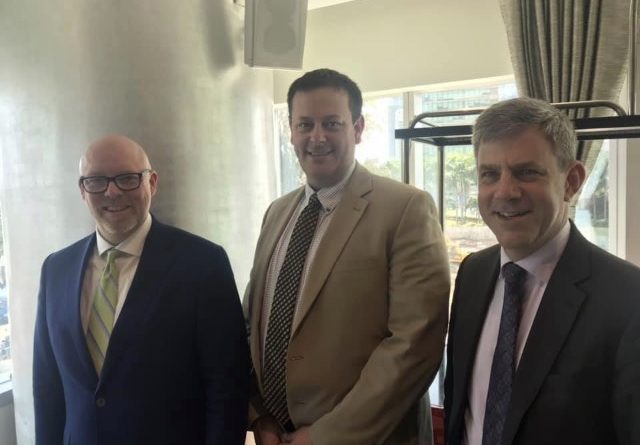 Sanctions and subsidies have affected the soybean market in recent months, but export opportunities are increasing, according to a local grain merchandiser.

“It was not a fun day,” said Kevin Wilson of Wilson Farms in Vankleek Hill about when China announced trade sanctions against the United States.

He noted though that the Trump administration offered a (US)$1.65 per bushel subsidy to American soybean producers but the Canadian government did not offer any similar subsidy.

Canadian exports of soybeans to Asia ended up increasing due to the sanctions.  China started purchasing more Canadian soybeans because it was no longer purchasing American ones.

Even though the market has experienced challenges during the past year, Wilson is optimistic about the season ahead.

Wilson pointed out that demand is growing in Asia and countries there want a steady, sustainable supply of soybeans.

From February 25 to March 3, he visited Tokyo, Japan; Shanghai, China, and Ho Chi Minh City in Vietnam to meet with suppliers there. Andrew Jones, the Director of Corporate Affairs for Soy Canada, which is the national organization of soybean growers and marketers, and federal Deputy Minister of Agriculture and Agri-Food, Chris Forbes were also on the trip.

For Wilson, the trip resulted in meeting new suppliers and exporters, including one that supplies crushed soybeans to Malaysia and another that supplies the food industry in Japan.

Wilson estimated that 20 per cent of the soybeans he merchandises this year will go directly to foreign markets.

Wilson Farms trades in both GMO and non-GMO soybeans; there is a demand in the Asian market for both varieties to be used in soy milk production.

Wilson added that soybeans from Eastern Canada are highly favoured in export markets because they usually have a higher protein content than those grown in Western Canada.

According to Wilson, his business and local canola growers are not being affected significantly by China’s decision to stop purchasing Canadian canola.

The move by the China follows unproven allegations there were pests in some previous shipments of Canadian canola, but also following the controversy over the arrest in Canada of an executive with Chinese telecommunications firm Huawei.

Wilson said canola is not a prominent crop in Eastern Ontario or most of Eastern Canada.

The US corn crop is expected to be larger this year, according to Wilson. That means the price paid to Canadian farmers at harvest-time is also likely to be lower as well.