Event hopes to bring threshing world record back to St-Albert 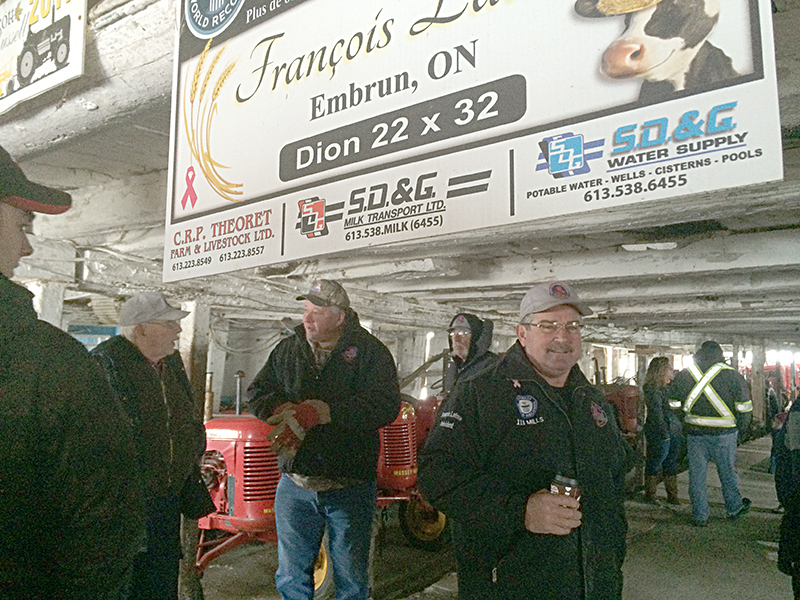 Francois Latour and VITEO member Garry Howes of Maxville looked at the many Massey Harris tractors on display in Latour’s barn last year; some of which were used in an attempt to make a new world record in 2018.

In 2015, the Guinness World Record of 111 threshing machines operating all at once was set in St-Albert.  In 2016, a group in Manitoba set a new record with 139 machines.

This summer on August 11, the St-Albert group is aiming to reclaim the world record with over 200 machines operating for 15 minutes in a field behind the village’s landmark cheese factory.

Machinery collectors are what make this record-setting opportunity possible.

“They talk to each other,” Latour said, referring to how news of the event spreads.

All of the machines registered so far are from Ontario and Québec, with some coming from as far away as London in the west and Rimouski in the east.

Latour said someone from the Guinness organization in New York City will be in St-Albert to officially verify that a new record is being set.

Organizers are also hoping to set another world record that day too.

They need 8,200 people to make the largest ever pink ribbon in support of breast cancer research.

Each person who shows up to be part of the big ribbon will be counted and then photos will be taken using a drone and scissor lifts.

The Guinness record weekend in St-Albert is the first of two big weekends in the village.  The 25th Festival de la Curd takes place the following weekend from August 14 to 18.

It is free for threshing machine owners to register to enter the Guinness record event, but admission for everyone that day is $15 per person.  All proceeds go to breast cancer research and organizers hope to raise $100,000 for the cause.