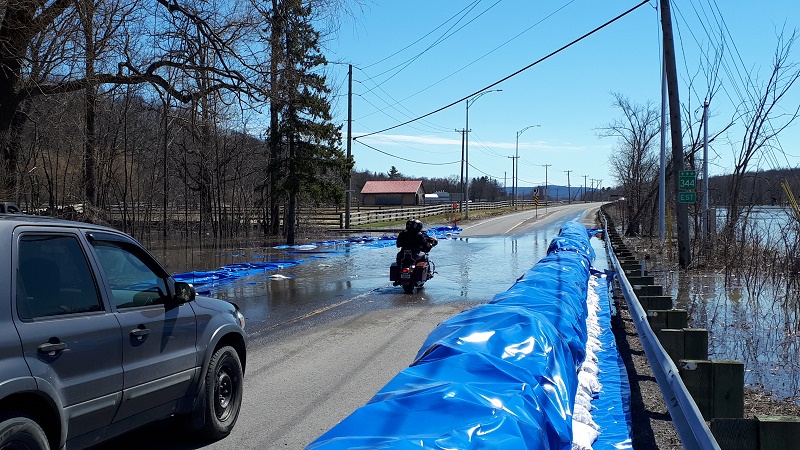 Flood warnings for the region continue, as heavy rains mid-week in northern and central areas of the Ottawa River Basin, combined with increased snow melt, may see the Ottawa River rise to levels close to those experienced at the height of the May 2017 flood. Water levels are expected to remain high along the Ottawa River for the next few days in Clarence-Rockland and Alfred-Plantagenet; current water elevation has peaked at 43.02 metres, according to an SNC press released issued Tuesday afternoon.

The news follows a stress-filled Easter weekend across the region. SNC warnings and updates began last week, in anticipation of heavy rain which had been forecast for Friday and Saturday, April 19 and 20. Despite predictions of heavy rainfall for both days, only Friday brought 35.4 mm of precipitation. Water levels of the Ottawa River were supposed to peak on Monday, April 22, but are now expected to peak again on Monday, April 29 at 43.3 metres, slightly below peak levels observed in May 2017.

The heavy rainfall, combined with greater-than-usual spring runoff due to above-average winter snow accumulation, caused weekend flooding along the Ottawa River and its tributaries, as well as overloading creeks and streams locally.

Clarence-Rockland was preparing for the worst, recalling 2017 flooding. Volunteers were filling bags with sand in that municipality and updates were being provided throughout the weekend. But the river levels stabilized and did not reach 2017 levels. No state of emergency was declared there, but residents were advised on Monday that because water levels could rise another foot, residents should leave sandbags in place until May 15, 2019.

In contrast, Saint-André-d’Argenteuil’s mayor declared a state of emergency on Friday evening. An emergency shelter was set up at the Kevin Lowe Pierre Pagé Arena as the municipality was telling residents in the affected area to evacuate their homes. In all, about 50 homes had to be evacuated due to the rising levels of the Rivière du Nord. Volunteers were also in demand in that community to fill sandbags. Rainfall as great as 70 mm was recorded in the Laurentians.

St-André-d’Argenteuil council met Sunday and voted to extend the state of emergency for five days until Friday, April 26. Council will meet Friday to decide if the declaration should be extended.

“We have a good team,” said Mayor Marc-Olivier Labelle, referring to firefighters, council, and municipal staff who are dealing with the situation.

The most-affected areas of the municipality are St-André-Est, Carillon, Terasse Robillard, La Baie, and Rue Fournier.

Armed Forces arrives
The Canadian Armed Forces has been asked to assist in four different locations. At St-André-Apotre church, Rivière du Nord has risen very close to the rear of the building. The public library is located in the church basement. Route 344 will be kept secure to ensure safe access and emergency response. The army will also monitor the flood situation on rue de la Seigneurie and the Ile-aux-Chats bridge.
“People’s safety is the priority,” said Labelle.

On Route du Long-Sault on Monday afternoon, occupants of homes along Rivière du Nord were safeguarding their homes the best they could with sandbags. Sylvie Larente had placed sandbags around her entire house. She said family and friends all helped fortify the home against the rising water.

She did not have to leave her home “just yet,” and has never had to leave during any previous floods.

Larente said only part of her basement was filling with water, but it is unfinished, so damage would be less severe. A friend had shown up with a pump and hose and was trying to empty the basement.

Upstream in Lachute, the city issued a news release on Monday recommending residents in the Place Laurin area leave their homes.  About 20 properties in that area are affected so far, but other streets within the municipality are also closed.  The city is distributing sandbags and the emergency management team is prepared for various scenarios that could develop later in the week when more rain is expected along with rising water levels.

Back in Ontario, Champlain Township had prepared for the worst by setting up a sandbag filling station at the L’Orignal Fire Hall and on Friday, it put out a call for volunteers. But by mid-day Saturday, it had acknowledged that the water levels were remaining stable and it was keeping a list of volunteers on hand in case they were needed. The Ottawa River water level rose but not to levels seen in 2017. The municipality had emptied the fuel from the fuel tanks at the marina, but the tanks had been bolted in place by Stinson, the municipality’s fuel supplier.

On April 21, the township issued a press release stating that the water level had risen slightly from the day before but was relatively stable. Municipal crews are closely monitoring the entire territory, according to the press release.  Sandbags were distributed to about 20 houses. Champlain Township says it has 3,000 sandbags ready and a large number of bags and sand in reserve.  If residents are concerned by a rapid or even gradual rise in the water level, they should notify the municipality. You can reach Champlain Township at 613-678-3003 or after business hours at 613-632-4111. The township says it will post regular updates on its website and Facebook page in the event of any changes.

In nearby Alfred-Plantagenet, sandbags were filled in Lefaivre by volunteer firefighters to assist residents whose homes were threatened by rising waters.

Neither of those municipalities declared a state of emergency.

Monday afternoon, the Rivière Rouge was still rising and water was close to overflowing on certain sections of roads. On Sunday morning at about 11 a.m., the section of the Rouge River Road, from the Kilmar intersection to the bridge, was closed to traffic due to flooding. 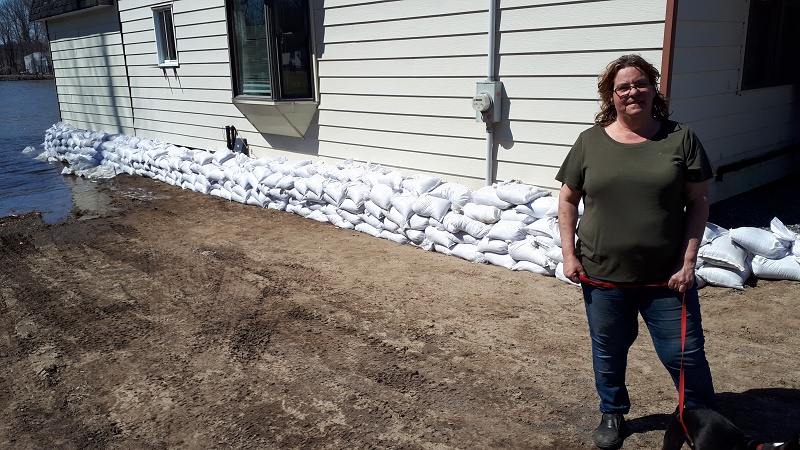 Sylvie Larente has surrounded her house on Route du Long-Sault with sandbags and has a pump working to keep water out of the basement. Photo: James Morgan