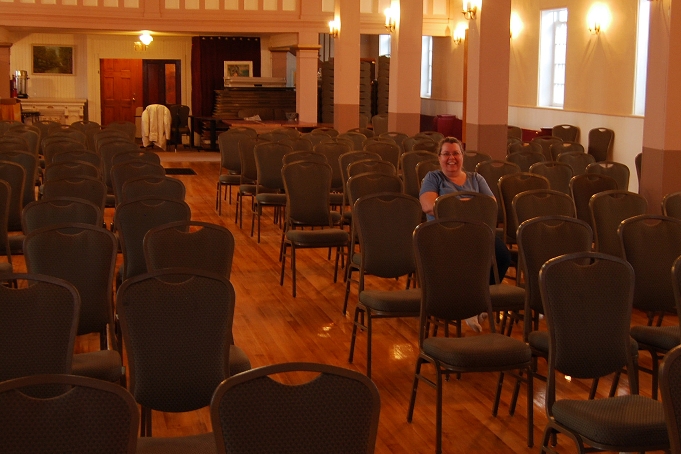 Comedy Night at Lochiel Centre, held to raise funds for necessary improvements, will see three comedians take the stage. Paul Baluyot has a “charming, clever, and laid back style,” according to promotional material, while Heidi Foss is “dry” and “deadpan,” and Mike Paterson is “just a little bit wacky.”

Collectively, the trio boast a host of comedic credits, including appearances at Montreal’s Just for Laughs festival, on George Stroumboulopoulos Tonight, plus television writing and acting credits. Organizer Henriette Keusch says all three will deliver “respectful” programs that everyone in the audience can enjoy.

Keusch has headed up Lochiel Centre’s volunteer board of directors for almost five years. The centre has more than 80 paid members and many more volunteers. Memberships help to pay the bills, but the centre’s long-term viability requires some big-ticket improvements.

Lochiel Centre has made great progress since leasing the building from the Catholic diocese of Alexandria-Cornwall after it closed Saint-Alexandre church in 2014. Generous donations of cash and materials have helped keep the volunteer-run centre on course to become a fully-fledged community centre.

The biggest barrier continues to be the building’s lack of plumbing. In 2018, Lochiel Centre achieved its goal of installing a septic system and well. The next step is indoor toilets. Keusch says they have a “big wish list” of community events that are on hold because of the lack of toilets. Kitchen facilities for catering are also on the list of improvements that will allow the centre to realize its goal of becoming a fully functional community centre.

Comedy Night follows on the heels of last September’s successful Abba Revisited performance, which sold out for two nights. Lochiel Centre has already booked Green River Revival, a CCR tribute band, for September 28 of this year. Tickets for that show go on sale this weekend.

At Comedy Night, the centre will host a cash bar, and snacks will be available. As for toilets, for now they’re rented portables, just steps from the centre’s door. Keusch hopes a successful event this Friday will enable work to begin on indoor washrooms and running water.

Comedy Night at Lochiel Centre runs for one night only, Friday, April 26 at 8pm. Tickets are $30 and are available by calling Keusch at 613-525-0462. Tickets will also be available at the door. Lochiel Centre is located at 20863 County Road 21 near Alexandria, ON.