The Highway 34 overpass was repaired a few years ago. The overpass, along with a bridge passing over the Hawkesbury Creek (that bridge is also part of County Road 17), are both slated for replacement. A quick demolition is planned and new overpasses will be pulled into place.

If you have something to say about the County Road 17 bridge replacements which are taking place where Highway 34 meets Highway 17 south of Hawkesbury, this is your chance to speak up.

An online public information centre will provide an update to the project, including a summary of comments gathered from the first round of consultation and how they were addressed. All of this information will be available online from April 29 to May 27, 2019 at www.cr17bridges.com.

Project information will include the detailed bridge design, improvements to the detour route, anticipated impacts and proposed mitigation, according to the public notice published in the April 24 edition of The Review. (See the end of this article for that public notice.)

Champlain Township and the Town of Hawkesbury councils recently listened to presentations outlining the work to be done. Both councils voiced objections to various elements of the work, including the elimination of the speed change lanes, the detour, access to Highway 34 and other issues.

The project includes replacing two bridges. The replacement bridges will be reduced to two lanes (eliminating the existing speed change lanes), as the Ministry of Transportation says that recent traffic analysis has shown that they are no longer required to accommodate future traffic volumes.

Those who are unable to access the project website or who have accessibility requirements can contact the Consultant Project Engineer, Mr. Matthew McFadden, P.Eng. by calling 613-723-8700, ext. 73156, or by emailing: [email protected] 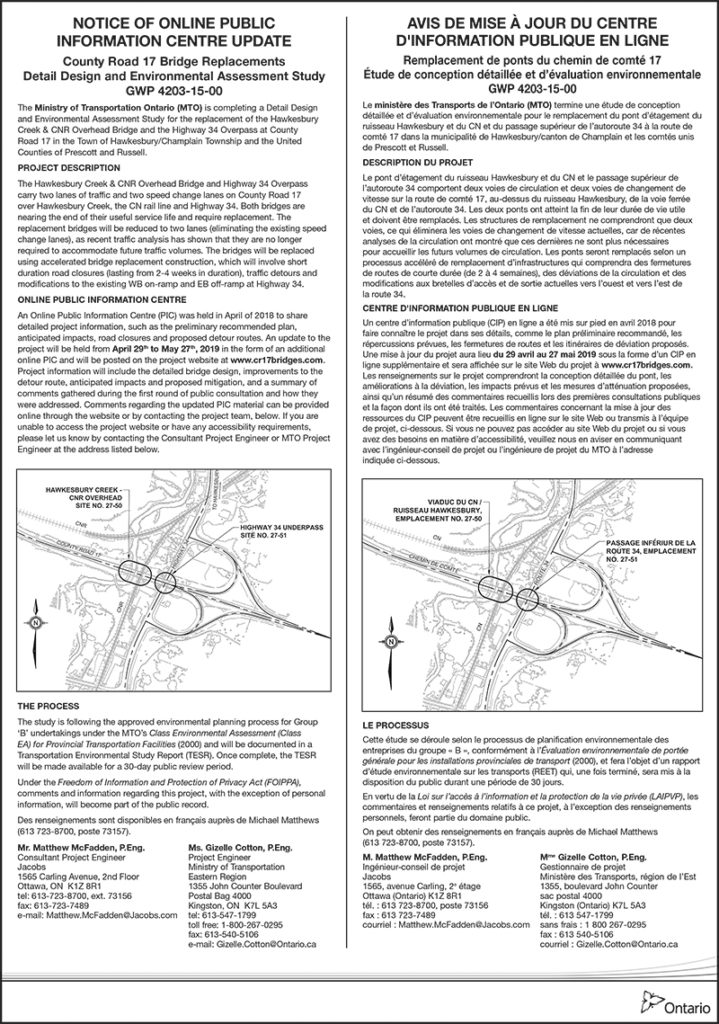