We are the champions! Cougars win 2019 NCJHL championship 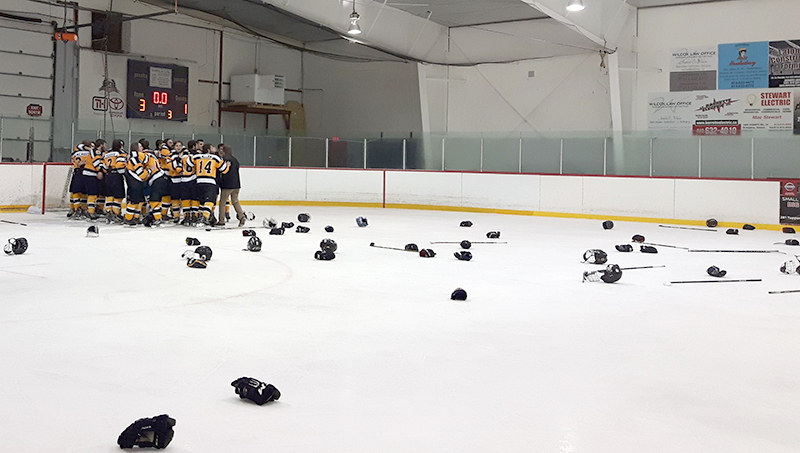 “It’s an unbelievable feeling,” Cougars’ alternate captain Ryan Allen says of the victory. “I can’t even put into words how proud I am of everyone involved with this team.”

Coming off a game three win last Sunday in Clarence, the Cougars would head into game four with the opportunity to end the series on Saturday night in front of their home crowd. As fate would have it, the game would fall on the same date as finals day for the 2019 edition of the Nissan Pond Rocket Cup, an annual hockey tournament featuring more than 200 hockey players from across the region.

With the tournament as the lead-in, the Cougars would skate out to a fully-packed house, brimming with eager anticipation for the potential title-clinching game to come.

“I don’t think I’ve ever seen that many people in the arena,” Allen says. “The atmosphere was unreal”.

Despite the hometown energy behind them, it would be the visiting Castors who would strike first in the contest, potting a goal midway through the opening period to take the early 1-0 lead. But the Cougars would not be deterred. Applying pressure throughout the frame, the home team would finally be rewarded in the closing minute of the period, with Keean McEachern firing a goal past the Clarence keeper to knot things up at one apiece.

With the game tied, the Cougars would continue to buzz throughout the second period, holding the balance of chances but ultimately coming away empty-handed.

The opening minutes of the third would progress in much the same way, until a high hit on McEachern resulted in a five-minute major penalty and an ejection for one of the Clarence forwards. The Cougars would not let the opportunity go to waste. Less than a minute into the power-play, Nicolas Castonguay would crank one home to break the deadlock and give the Cougars the 2-1 lead.

The Castors would put up a fight in their attempt to tie the game and preserve their season but the energy of the Vankleek Hill squad and its roaring faithful would prove a force too powerful to contend with. Amidst deafening cheers from the home fans, the Cougars would tally an empty-net goal to stick the final claw in the Castors, taking the championship-clinching game by a final score of 3-1.

With the win, the Cougars take home their first championship title since the 2002-2003 season.

As Allen explains, the feat is even more notable given the uncertainty of the team’s status at the beginning of the season.

“We didn’t even know if we were going to have a team at the start of this year. Franky [Dopelhamer] stepped up and did an amazing job with this group. The whole coaching staff, our manager Marc [Bernique] — everyone. They really gave everything they had to make this [win] happen.”

With the close of the 2018-2019 season, Allen, Captain Tyler Dopelhamer, and Alternate Captain Hugo Blanchard will graduate from junior hockey, ending their tenure as Cougars.

“It’s bittersweet,” Allen says. “It’s going to be hard to say goodbye to it all, but I guess if you have to go out, this is not a bad way to do it.”

The championship is the third in the Vankleek Hill Cougars history, following previous wins in 1992 and 2003.