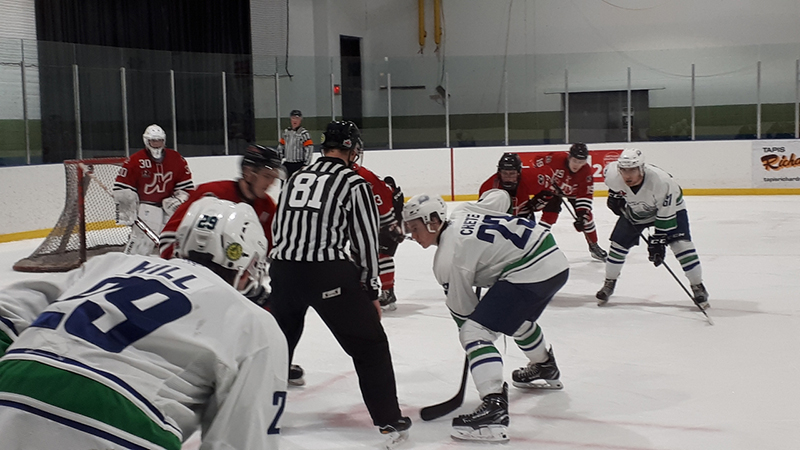 The Hawks faced off against the Raiders this past weekend. Photo: James Morgan

The Hawkesbury Hawks split their matchups this week, going 2-2 in four games played to open the final month of the regular season.

On Tuesday, the Hawks travelled to Smiths Falls to take on the Bears. Unfortunately for the Hawks, the Bears would strike first in this one—at just over three minutes into the opening period. The Bears would add another on the power play midway through the second to double their lead. Despite levying 34 shots on net, the Hawks would be unable to solve the Smiths Falls keeper, resulting in a 2-0 shutout victory for the Bears.

The Hawks returned to action on Thursday for a tilt against the Kanata Lasers. Again, the Hawks would concede the first goal, this time off of a Lasers power play seven minutes into the opening period. However, the Hawks would tie the game up on a power play goal of their own before the end of the frame. Trading goals early in the second would pace the teams to a 2-2 tie before Kanata buried two goals in less than three minutes to take a 4-2 lead heading into the third. The Hawks would make it a one-goal game midway through the period but that’s as close as they would come as the Lasers took the victory 4-3.

Friday saw the Hawks come home to host the Rockland Nationals. Things would finally start in the Hawks favour in this game, with Bradley Shaw scoring two minutes in to give the Hawks their first lead in three games. Rockland would tie the game in the second but the Hawks would break the deadlock in the third to take the 2-1 vctory.

On Sunday, the Hawks played at home once again, this time welcoming the Nepean Raiders to continue a game which had previously been postponed on September 21. As a result, the Hawks would start the game with a 2-0 lead in continuation of the previous score. The Hawks would double their advantage by the end of the first, with the game ultimately ending 5-1 in the Hawks favour. Zachary Fournier (3a) and Jeremie Lavalee (1g, 2) would each pick up three points, while Nick Stofchek would stop 38 shots in the victory.

The Hawks return to action on Friday, March 8 when they play host to the Pembroke Lumber Kings.