More than 1,200 local students are practicing mindfulness in their schools 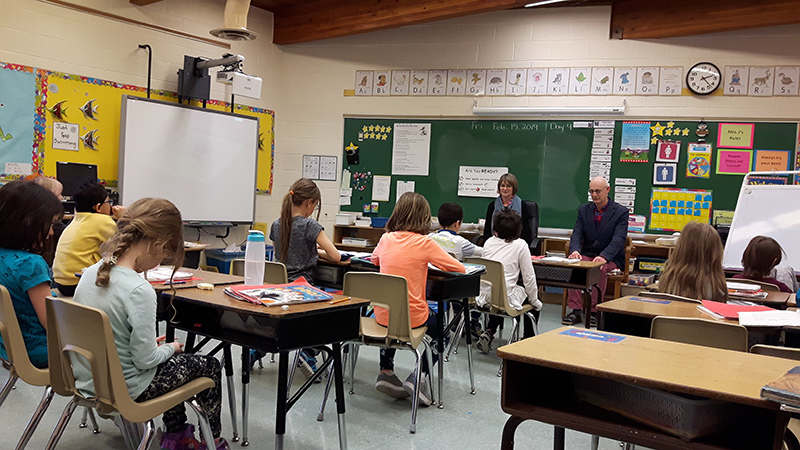 The bustle of Pleasant Corners Public School stopped for two minutes after the afternoon Wellness Break, when students and teachers in all the classrooms and hallways stopped what they were doing during the playing of the 2-Minute Mindfulness Bell over the school’s PA system. Seen here is Grade Two teacher Lisa Jennings, along with Ian Hepburn, who visited this class on Friday afternoon.

A journey of a thousand miles begins with one small step. For Vankleek Hill music teacher Ian Hepburn, it was while working in elementary and high schools for the past seven years – with large groups and one-on-one with children with difficulties, that the need for mindfulness work in schools really took hold.

“We live in an age of anxiety,” says Hepburn, matter-of-factly. For the veteran piano and harp teacher (Hepburn has taught music for more than 40 years) who is a practitioner of mindfulness, it may seem like a small step to introduce mindfulness to schools. But in fact, it is quite an undertaking to get everyone to stop and be still and calm — even for just two minutes, not once, but several times in the middle of a busy school day. Yet that is exactly what Hepburn’s 2-Minute Mindfulness Bell recording aims to do.

For the past two years, the students at Grenville Elementary School and Pleasant Corners Public School have made time for mindfulness. And Hepburn says that he is hearing from teachers and students that it makes a difference.

“What I find really remarkable is that some students are saying that they are doing this on their own — outside of school and at home. That’s really something,” says Hepburn.

Although looking inside oneself for peace and calm is the goal of the 2-Minute Mindfulness program, Hepburn becomes quite animated when he talks about the benefits.

“Imagine trying to teach in a room full of restless kids who are feeling overwhelmed by everything. Or imagine eating lunch in a cafeteria where there is so much noise you can hardly think. If this helps everyone to calm and focus and learn to find strength in stillness, it is worth it,” Hepburn says.

“Many principals want to change the culture and climate of their schools but aren’t sure how to make this actually happen. Mindfulness Practice seems to offer a way but they wonder: Will staff have to take special training? Will we lose precious class-time? Will teachers and students find it too difficult?” According to Hepburn, these are the questions he is asked when he approaches schools and suggests a mindfulness practice.

During the past two years, Grenville Elementary School has discovered the answers to these questions in Hepburn’s recording, called the “2-Minute Mindfulness Bell”.

The recording consists of five original pieces of music – each lasting for two minutes. It is programmed into our computer system and broadcast over the P.A. system throughout the entire school three times a day.  One of the five pieces is played at 8:45 am following morning announcements; another piece at 10:50 am following mid-morning recess and a third piece at 12:20 pm following lunch break.

This is what the students and staff hear: A Tibetan bell is struck followed by eight seconds of silence during which students put down work and sit up straight. The words “We breathe in … we breathe out …” are heard four times over very soft music. This is followed by 90 seconds of instrumental music featuring Celtic harp. The session ends with a final “We breathe in … and we breathe out …“  and the strike of the Tibetan bell. Class work resumes. To maintain a sense of calm awareness, the spoken word and music are matched and timed to 60 beats per minute.

Hepburn says the practice does not require special training, but only a willingness on the part of teachers to model the behaviour for the class. In other words, follow the instructions from the recording, sit up straight and feel the breath. The practice takes just two minutes and leads to calm and focus, Hepburn says, as well as being a good transition from the buzz of the playground to the calmness needed for productive class time.

It is important to note that staff ‘buy-in’ is crucial to the success of the program. If teachers see the importance of it, then their students will respond in kind. “We are very fortunate to have a staff that foresaw the potential of the project right from the beginning,” says Grenville Elementary School principal Nancy Bennett.

Will it be difficult?

Hepburn smiles and says, “Everyone is told: Sitting quietly and feeling the breath will be the easiest thing you have ever done …. and the hardest thing you will ever do.”

Pleasant Corners Public School has also been using the 2-Minute Mindfulness Bell recording for the past two years. To help students make the transition from noisy environments – such as cafeteria and playground – to the needed quiet of the classroom, the recording is broadcast throughout the school after First Wellness Break at12:20 pm and following Second Wellness Break at 2:20 pm.

To determine the efficacy of the project, questionnaires were circulated to the staff and students at the end of the first year. Here is some of what was said:

WHAT TEACHERS ARE SAYING:

Kindergarten: “Students respond very well to the routine and regular breathing. Good reminder to pause and breathe”. “Even my little ones look forward to the recording each day”.

Grades One and Two: “Very broad range of levels of engagement, distractibility and excitability; but overall beneficial.”

Grade Three-Four: “Really helpful to settle and calm after recess”. “I notice a difference in focus after ‘the Bells’. Would be happy to try this again in September.”

Grade Five: “In the past, I would turn lights off, read to them, etc. just to calm them down. I always found the students very ‘wound up’ after our Recess and Lunch. I now enjoy the 2-Minute Mindfulness Bell and find it provides a moment of silence. All the students know what is expected of them”.

Grade Six: “As a re-enforcement – a gong/bell in the classroom as an attention grabber would be something I’d add to next year’s routine”. “The experience has been positive!”

WHAT STUDENTS ARE SAYING:

In response to the question “Did the Bells and music help to make you more calm?”

“I like when we do it (listen to the bells) because it calms me down”.

“When I hear it I feel good. The bells are the best part of my day”.

A comment from one student: “Ahh, I needed that.”

According to Dr. Addie Wootten, a leader in delivering innovative programs to promote wellbeing, support for mindfulness programs in curriculum has grown significantly among educators in the past five years. Wootten says that, while interest from individual teachers is important, research indicates an entire school participating in mindfulness techniques will “positively affect students, the culture and climate of the school, and teacher well-being.”

An article published by CMRubinworld goes on to say that educating students in STEM (science, technology, engineering and mathematics — in an interdisciplinary and applied approach) has become the major focus of most school systems but Wootten contends that supporting this with mindfulness programs improves “students’ ability to perform in an academic context” given the focus on ensuring that minds are ‘calm’ and therefore optimized by improved mental health. She adds, “the future of work will rely on our ability to adapt, innovate and work creatively without defined borders or even stable work spaces.” Mindfulness skills “underpin essential social and emotional learning” students will need.

Recently, Maxville Public School, incorporated the 2-Minute Mindfulness Bell into its daily routine. Questionnaires were circulated to staff and students at the end of the first year. Here is what was learned about mindfulness practice during the 2017-2018 academic year (as recorded in the school SIPSAW (School Improvement Plan for Student Achievement and Wellness).

At the end of Maxville Public School’s Mindful Breathing initiative (mid-June), students were given a 5-question survey reflecting on this practice

59% felt that the classroom was quieter after the practice

89% of students felt that this practice should continue next year

100% of staff feel that this practice should continue next school year.

After surveying students and staff, the majority feel that this practice has given them an effective strategy to calm their emotions and as a result focus on the learning.

Hepburn says feedback includes comments such as, “I like to hear my students use the strategy at other times” and “Receiving feedback from my students has been positive. I heard once, ‘I needed that’.”

What could come next is a longer duration for the practice, less mobility of staff/students in halls when the practice occurs, and extending the practice by reflecting on the body’s response to the practice. Staff could recognize the benefits of the practice and follow through: “How will you keep the calm”?

Results also demonstrate that the students who have displayed signs of mental illness and/or severe emotional, self-regulation issues, did not feel this practice was beneficial at the time of this survey.

ian hepburn holds Piano Performance and Piano Pedagogy diplomas from the Royal Conservatory of Music. He has taught piano and harp privately for more than forty years. Ian is a certified Vibroacoustic Harp Therapy practitioner and teacher. In 2016 he completed the Mindful Schools course. He has taught courses at Algonquin College in Ottawa on the use of harp in hospitals, long-term residences and hospices. He has worked in elementary and high schools for the past 7 years – working with large groups and one-on-one with children with difficulties. He is deeply committed to promoting Mindfulness Practice in schools. The creation of the 2-Minute Mindfulness Bell and related aspects of the O P E N S P A C E project are the realization of that commitment.