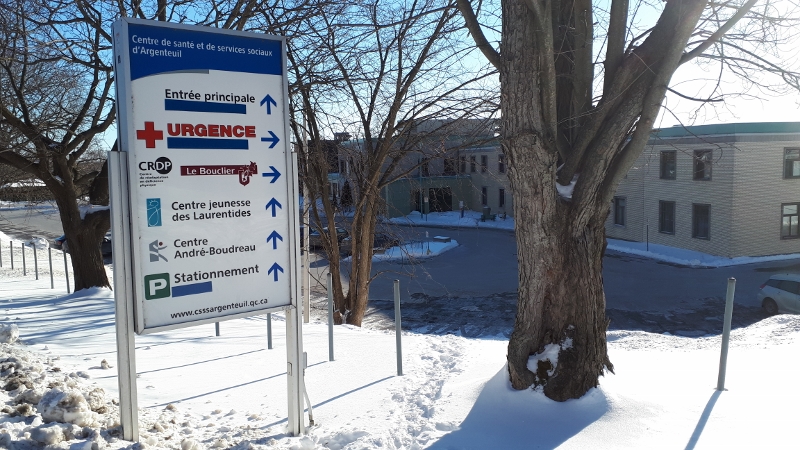 Political responses are emerging about the removal of English signage from the regional health care and social services facility in Lachute.

In December, it was announced that English signs on the grounds and the buildings of the Centre multiservices de santé et de service sociaux d’Argenteuil, which includes the Lachute hospital would be removed.

The signage did not comply with the French-only provisions of Québec’s French-language charter, also known as Bill 101.

As of Saturday, January 12, all English signage outside the hospital on Avenue de la Providence had been covered.

Curiously though, the signage on Rue Laurier had not.

The removal of the English signage prompted opposition from the MRC d’Argenteuil council, which is composed of mayors from all its municipalities.

The press release issued by the MRC in late December highlighted the many historic and current examples of cooperation and friendly coexistence between francophone and anglophone residents of local communities.

The MRC said the provincial decision also goes against its value of inclusiveness towards anglophone residents in the region. It hopes the Québec government will reconsider and discuss the health centre signage issue with the MRC to reach a solution.

“Lachute has the same position as the MRC,” said Mayor Carl Péloquin.

Pierre Thauvette, the interim mayor of the village of Grenville, made similar remarks.

Grenville-sur-la-Rouge mayor Tom Arnold said, “Obviously we’re not happy with it; we’re not for it.”

“As soon as we (the MRC) were made aware of it, we objected,” he said.

In Morin Heights, the only officially bilingual municipality in the MRC des Pays d’en Haut, council voted on January 9 in support of the MRC d’Argenteuil’s resolution against removing the English signage.

A statement from the municipality of Morin Heights said there was no proof that the English signage was threatening the French language.

Morin Heights also argued that any money spent on changing signage would be better spent on reducing emergency department wait times at the hospital.

Argenteuil Member of the National Assembly (MNA) Agnès Grondin issued a statement on the situation on January 11.

Grondin, a member of the governing Coalition Avenir Québec (CAQ), reiterated her first speech in the National Assembly after being elected in 2018 where she stated her commitment to the French language but also the prominent place of the English-speaking community.

“That said, the defense of the French language does not question the historical rights of the English-speaking community,” added Grondin.

The MNA said she is committed to ensuring access to health services for English-speaking residents, particularly senior citizens, and is willing to meet with stakeholders to make sure those services are provided.

On January 12, English signage for the hospital on Rue Laurier was still in place. Photo: James Morgan