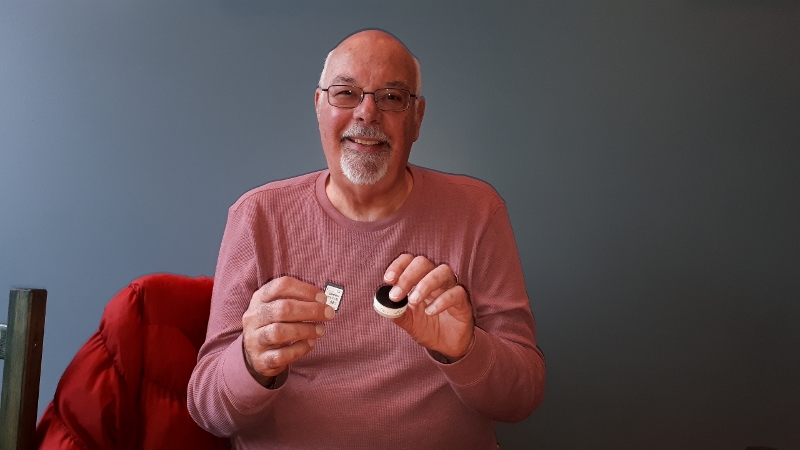 Recently-retired Hawkesbury COGEGO-Your TV station manager Ron Handfield showing how technology changed during his 50-year television career. In his right hand, he’s holding a roll of 16mm film from a news story in the 1970s, in his left hand, an SD card which is used to gather video footage today. Photo: James Morgan

Ron Handfield has seen a lot happen through a camera lens.

The station manager of COGECO’s Your TV cable television operations in Hawkesbury retired on November 30, after a 50-year career in television, 26 of which were in Hawkesbury.

Handfield grew up in Joliette and in Montréal. He took courses at the School of Modern Photography.

In 1966, he was newly married and needed work.  CFCF channel 12 (CTV), needed a still photographer, so he applied and was hired.

In years past, television stations used still photography for images and graphics used in advertising, news, and station identification.

He was eventually promoted and became a film camera operator, and mostly worked in the news department. In those days, TV stations used 16 millimetre film, much of it still in black and white, to get their footage for news broadcasts.

Today, everything fits onto a small SD card.

In Montréal during the late 1960s, there was a lot of big news happening.

At Expo in 1967, Handfield got to have a conversation with Emperor Haile Selassie of Ethiopia, met legendary TV host Ed Sullivan, and had a short chat with boxer Muhammad Ali.

There were turbulent times too.

Handfield was at the 1968 St-Jean-Baptiste parade which turned violent. He was in a smoke-filled corner of a campus building during the 1969 riot at Sir George Williams (now Concordia) University. And, a year later in 1970, there was the  tense October Crisis.

Travel was also a part of Handfield’s career in those early years. He went to the Arctic to get film of a ship attempting to navigate the Northwest Passage and did a shoot for a travel show in Hong Kong where he met actor Christopher Plummer.

Handfield moved into a management role at CFCF which took him away from the front lines of news gathering. He and his family moved to Chute-à-Blondeau.

In 1990, Handfield decided to try another line of work for a while. He sold cars for a couple of years, but TV came calling again. He started volunteering at Maclean-Hunter Cable, the former cable company that served Hawkesbury.

Volunteering led to a part-time job, and by 1994, Handfield was the station manager. Rogers took over Maclean-Hunter, and then COGECO purchased the Hawkesbury assets of Rogers.

Making local cable programming was not boring to Handfield.

“Actually, I found it very interesting,” he said.

“I liked meeting the people and being able to present to the local people local events without having to chop it up into two-minute segments,” Handfield said.

“We did a lot of local here,” said Handfield.

Some of those local programs included the children’s show, Carol’s Place.

Hawkesbury town council and UCPR council meetings are also staple programming on local cable. The last council meeting Handfield produced was the November 26 final meeting of the 2014-2018 council term. At the end of the meeting, then-mayor Jeanne Charlebois thanked Handfield for his service to the community.

Local cable stations run on a small budget with a small staff. In addition to himself, Handfield had one other part-time staff member at Your TV in Hawkesbury.

The Hawkesbury station has about 20 to 25 volunteers on average. Handfield said he always enjoyed having high school students as volunteers, so they could complete their community service hours. He said it gave them an opportunity to find out how television production works and help them decide if it was a career option.

After 50 years of making television, Handfield said “It’s hard to say” where broadcasting is headed.

He noted that so many viewers just stream programs now instead of watching scheduled programming, but he hopes there is a future for community television.

“There’s a need to present local events,” he said.

Now that he’s retired, Ron Handfield is looking forward to relaxing more, whether it’s at home in Chute-à-Blondeau where he lives with his wife, Marie Pageau or traveling to visit his five children and seven grandchildren.