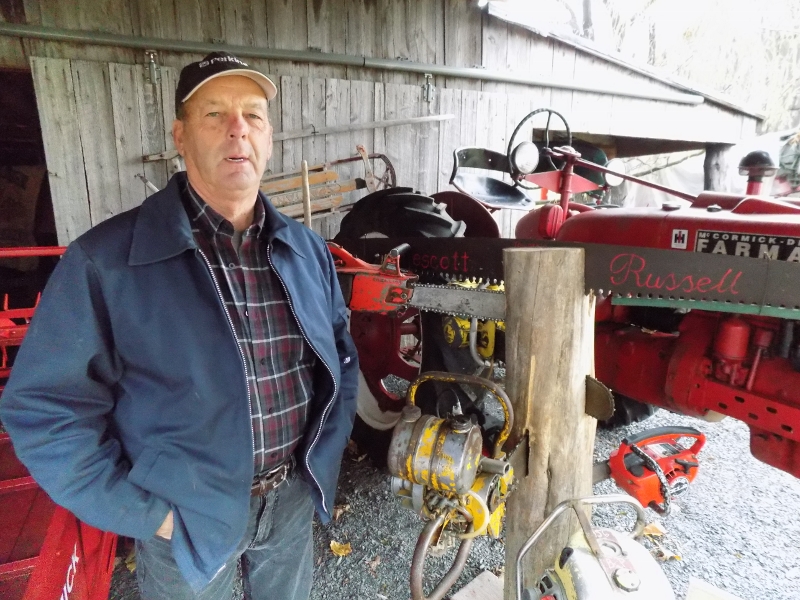 Denis Lauzon and one of his Farmall “H” tractors and an assortment of antique chainsaws. Photo: James Morgan

A look around Denis Lauzon’s farm near St-Eugène conjures up memories of how farming used to be done. Think back to the days of threshing machines, hay loaders, and makes of tractors like Cockshutt and Farmall.

Lauzon, a retired construction equipment operator who grew up on a farm on Nixon Road, has been fascinated with old farm equipment and rural customs for years. For 15 years, he’s been part of Vintage Iron and Traditions, a club for machinery restorers and collectors from across eastern Ontario. Back on October 14, members held a demonstration show at Lauzon’s farm and 200 people attended.

Lauzon appreciates the help he had from those who provided horses for the demonstration, and those who helped make the event successful.

“I want to thank them and to thank Vintage Iron members and friends,” he said.

Collectors like Lauzon take their items on the road too, usually to fairs in nearby communities or plowing matches.

A previous major achievement for Vintage Iron was in 2015 when the club set a Guinness World Record for the largest number of threshing machines operating together at the same time. There were 111 machines at that event, held in St-Albert. The record was later broken by another group in Manitoba with 225 machines.

Lauzon emphasized that the machinery on his property is not part of a museum, it’s a collection. He said people frequently slow down or stop to look. He changes whatever equipment is on display occasionally.

Collecting and restoring old farm machinery is something Lauzon does because he enjoys it.

Recent equipment Lauzon has restored includes an old cutter sleigh. Three years ago, he also built a western-style chuck wagon, which he takes in local parades. His current project is restoring a hay loader.

Lauzon has another feature of past rural life on his property. He’s built an outdoor oven in the backyard. Once a common sight on French-Canadian-owned rural properties, they are very rarely seen or used today. Lauzon said it only takes about 30 minutes to bake a loaf of bread or a pizza in his backyard oven.

In early spring, Lauzon also taps 400 trees on his 40-acre property to make maple syrup. He also grows a bit of buckwheat for use when demonstrating his threshing machine.