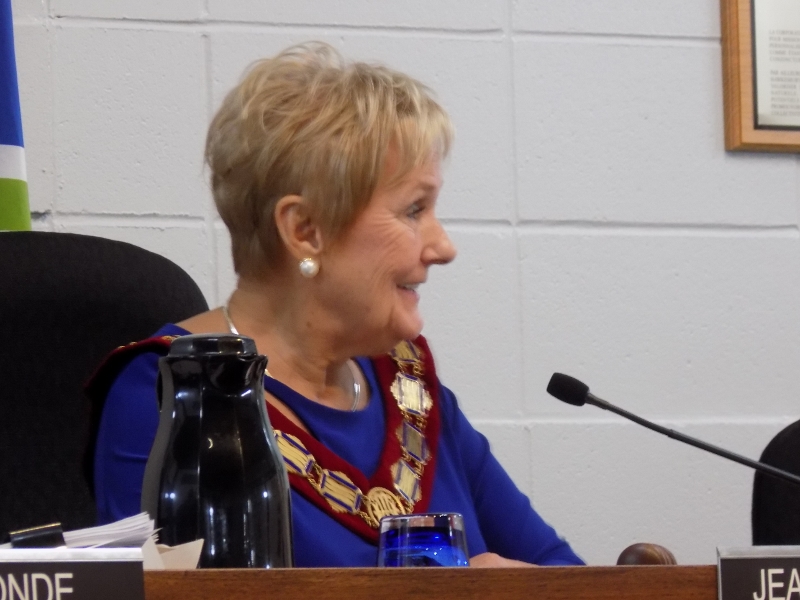 It was an emotional end to four years of governing.

Mayor Jeanne Charlebois, who was defeated by Paula Assaly in the October 22 election was tearful as she and other councillors made their final remarks.

Charlebois highlighted the activities and projects over the past four years and was especially proud of new economic investment and development that the town has attracted. She strongly credited the teamwork of council and staff in making it possible. “We are the envy of many municipalities, we became the one to watch, and we became the one to copy,” she said.

The mayor admitted she was hard on staff sometimes but said “I knew you could do it” and that sometimes when we know people are capable of major achievements, extra pressure gets put on them because there is confidence that they can get the job done.

Charlebois said the biggest accomplishment over the past four years was giving a new economic direction to the town and making it a place that people could feel proud about being from again.

Charlebois thanked each councillor specifically for their various contributions and positive attributes.

Councillor Michel Thibodeau, who is not returning for another term, appreciated the confidence of the voters.  He said he worked hard for the community and it was a pleasure to serve. Thibodeau thanked the media and all municipal employees.  He also thanked his family for their support and said he is looking forward to spending more time with them.

Councillor Pierre Ouellet, who was defeated in the October 22 election said to his colleagues, “It was a pleasure to work with all of you.” Ouellet thanked the staff for their hard work and congratulated the incoming council.

Daniel Lalonde, another councillor who did not seek re-election called the past term, “four, super, nice years.” He thanked staff for their hard work, “day after day.” Lalonde said it feels like he neglected his family during the past four years and is looking forward to changing that.

Councillor André “Cham” Chamaillard, who was re-elected on October 22, thanked the employees who help the town function properly.

Yves Paquette, who is also returning for another term on council, thanked the voters for re-electing him.   “It’s a great pleasure to represent you on council,” he said. And like his colleagues, had kind words of appreciation for municipal staff. Paquette also said it was a great pleasure to work with Charlebois. “I have a great respect for you,” he told the mayor.

Councillor Johanne Portelance, who is finishing her time in municipal politics after two terms, thanked residents for the confidence they had in her and said she is proud of what has been accomplished.  Portelance said she plans to continue being involved in the community and finished her remarks with, “Good luck to the new council.”

The 2018-2022 Hawkesbury municipal council will be sworn in at a special inaugural meeting on Monday, December 3, at 7pm in the community hall on the upper level of the Robert Hartley Sports Complex.