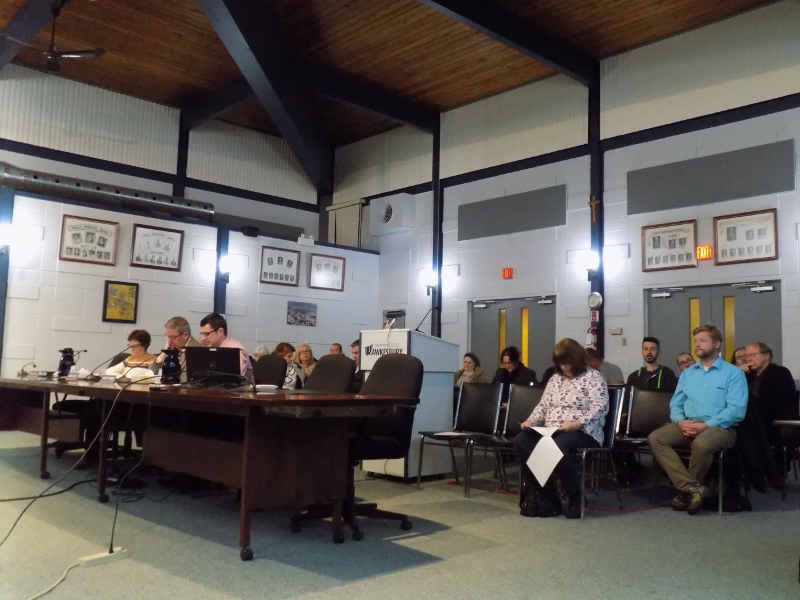 It’s municipal budget time in Hawkesbury. A public consultation on the town’s financial plans for 2019 took place on November 13 at the town hall.

According to a presentation by treasurer Philippe Timbers, Hawkesbury’s total property tax assessment for 2019 will be nearly $8.5 million, an increase of 0.33 per cent. The presentation was broad-based and did not include line-by-line items or a breakdown for each department.  Operational expenses for Hawkesbury were more than $20.6 million in 2018 and capital expenses were $5.7 million.

Timbers explained that salary costs are projected to increase by $318,400 above the approximately $7.5-million that currently pays municipal employees. According to Timbers, increases in the cost of living and employee benefits are factors contributing to the increase.

Timbers also noted that negotiations with the unions representing most municipal staff, including the firefighters, will be taking place in 2019.

Payments for long-term debt will also increase by $302,000 in 2019. Timbers explained that this amount was financed through the provincial government’s Infrastructure Ontario agency and is related to the redevelopment of the former Amoco site. There is also a $1.3-million balance remaining from the 2018 unfinanced capital budget.

The town has a $17.8-million, 20-year strategic plan in place to upgrade the wastewater facility. The first four-years of work, estimated at $7.7 million, would be the most costly portion of the work to be done.

The amount that Hawkesbury will receive in 2019 from the province’s Ontario Municipal Partnership Fund (OMPF) is still unknown. Additional funding from the Ontario Community Infrastructure Fund (OCIF) is guaranteed to continue until 2020 but there is no indication of what will happen in 2021.  Hawkesbury received $653,000 from the OCIF in 2018.

The cost of using the Ontario Provincial Police (OPP) will cost the town an extra $40,000 in 2019. The policing price tag in 2018 was over $3 million. The OPP rents the current station from the town. However, the new station being built will be owned by the OPP. The town will then lose $154,000 in annual rent revenue once the new OPP facility opens in 2021.

As for the municipal tax levy, Timbers explained that a one per cent tax rate increase or decrease represents $100,000 in property taxes. The levy decreased by $14,867 from 2017 to 2018, leading to a -0.01 per cent tax decrease. However, Timbers cautioned that another decrease is probably not going to happen in 2019.  “It’s really unlikely; we’ve got to finance our infrastructure,” he explained, adding that $600,000 in spending would have to be cut in order to maintain a negative tax rate.

Both Timbers and Chief Administrative Officer Daniel Gatien explained that the consultation was designed to initiate the budget process with council. They explained that the objective of the meeting was not to project tax rates or levies, but to review figures and get input from the public.

COMZAC-BIA Coordinator Suzanne Hocquard said a municipally-owned fence along Chenail Boulevard between John Street and Race Street needs painting and estimated the cost to do it would be about $4,000. Hocquard said COMZAC-BIA also wants a sign at the corner of Chenail Boulevard and Race Street to remind drivers they can also access the downtown area from there. Councillor Yves Paquette agreed about the fence and suggested half of it could even be removed.

Hocquard also spoke on behalf of the Hawkesbury Rotary Club. She said the club wants to develop a new picnic area on Chenail Island with tables, barbecue grills, and Adirondack chairs. She estimated it would cost around $7,000.

Stephen Sockett said he would like the town to financially contribute to a glow-in-the-dark dance party for children ages 6 to 16 that is being tentatively planned for January 18. Timbers said the town is announcing a policy soon where groups can request support for their projects and the deadline for applications will be December 15.

Douglas Martin said the documents lacked content and had no review of last year’s budget. He said the town has too many parks but no programming to take place in them.

Current mayor Jeanne Charlebois presided over the meeting, but on December 3, the new council elected on October, led by incoming mayor Paula Assaly, will be responsible for budget decision making.   Assaly and some of the new councillors were in the audience.

After the meeting, newly-elected councillor Robert Lefebvre told The Review that, “budgets are always a challenge.” He hinted that Hawkesbury should consider introducing development charges in order to increase revenue.

Assaly said that based on the figures discussed at the meeting, “There will be very little maneuvering space,” for the 2019 budget.

Timbers and Gatien plan to have the first draft of Hawkesbury’s 2019 budget ready for council on December 7. Further presentations with figures specific to each department are planned for December 13 and 14. The final draft is projected to go before council on January 9 with final review on January 14.