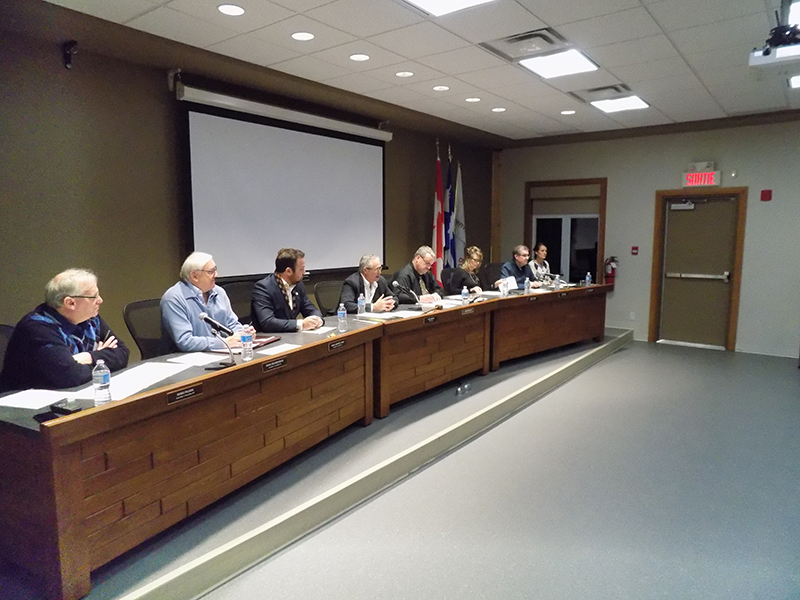 Grenville-sur-la-Rouge council has made another bold move aimed at controlling resource extraction in the municipality. On November 1, 2018, council officially approved zoning changes that will prohibit or curtail resource extraction and processing in the area where Canada Carbon has proposed to develop a new graphite mine and marble quarry.  The move will also complicate Mirabel-based Uniroc’s sand pit and quarry interests in the municipality.

Earlier this year, Canada Carbon launched a $96-million lawsuit against Grenville-sur-la-Rouge, claiming that the then-council had unreasonably tried to block its proposed marble quarry and mining project. Uniroc likewise launched a $9.5-million suit earlier this in response to council’s efforts to block or curtail resource extraction.

The November 1 meeting to approve the changes went quickly.  About two dozen residents were in the audience and rounds of applause followed each statement by Mayor Tom Arnold and council’s unanimous vote.

“The municipality does not intend to yield to the pecuniary and private interests of certain private companies and will continue to act with precaution and in a preventative fashion in order to defend the interests of its citizens,” the mayor said, reading from a prepared communiqué.  No other opinions and comments on the lawsuits themselves were made by the mayor or councillors as the cases will soon be before the court.

Council’s decision was months in the making.  A notice of motion proposing the by-law changes was introduced at a council meeting on August 28.  A public consultation on the proposed changes was held on October 16.

Under Québec law, if enough residents within the areas affected by a zoning change sign in opposition to it during a 10-day period following council’s decision, the question gets put to a referendum for residents of that area to decide.

No representatives of Canada Carbon or Uniroc were present at the November 1 special council meeting.

“I thought the opposition would have been here,” said Arnold.

David Séguin, spokesperson for SOS Grenville-sur-la-Rouge, the citizens action group that has been behind efforts to stop the Canada Carbon project for the past two years, said council’s action to stop or curtail these kinds of activities is part of properly implementing the Municipalité Régionale du Comté d’Argenteuil’s urbanism plan.

SOS Grenville-sur-la-Rouge has been saying it wants to protect the water, air, trees, and overall natural environment along with safeguarding the health and safety of residents.  Another concern is the damage trucks could do to the already deteriorated local roads.   Séguin noted that McGillivray Lake is only two kilometres from the proposed mine site and is home to several chalets and year-round residences.  He said he personally does not want to raise his family in an industrial setting.

According to Séguin, preliminary hearings for the Canada Carbon lawsuit begin in court on November 9.  He said the legal process will be lengthy.

“We are in front of a municipality that is not listening,” said Whissell, who added that the municipality is endangering its financial future by getting involved in two very costly lawsuits. The municipality, with a population of just 3,000, has an annual budget of about $5 million.

Whissell sharply criticized council’s decision and said the shift in zoning laws is “just a strategy to transfer the problem somewhere else,” and said that the part affecting Uniroc was targeted at his company.

“It’s clear they are doing that just because we are there,” said Whissell.

The Uniroc owner did highlight potential environmental concerns with council’s move.  He said that by allowing resource extraction closer to the village of Grenville, instead of further north, it could pose problems for the well that supplies the village with its drinking water.

Whissell said council is also harming economic development and employment.  Uniroc has 250 employees throughout the region and Whissell said he represents them too.

The Uniroc lawsuit will be heard by the court in 2019.  Whissell was talking tough about his legal prospects.

Canada Carbon is in the extraction business and Uniroc is in the gravel, sand, and rock processing business.  Whissell denied that Uniroc could benefit directly from Canada Carbon’s activities but Séguin said Uniroc could process stone that is surplus to its needs.

The municipality calls the lawsuits a “legal slap” but believes it can cover its costs through its fundraising campaign: Solidarité GSLR.