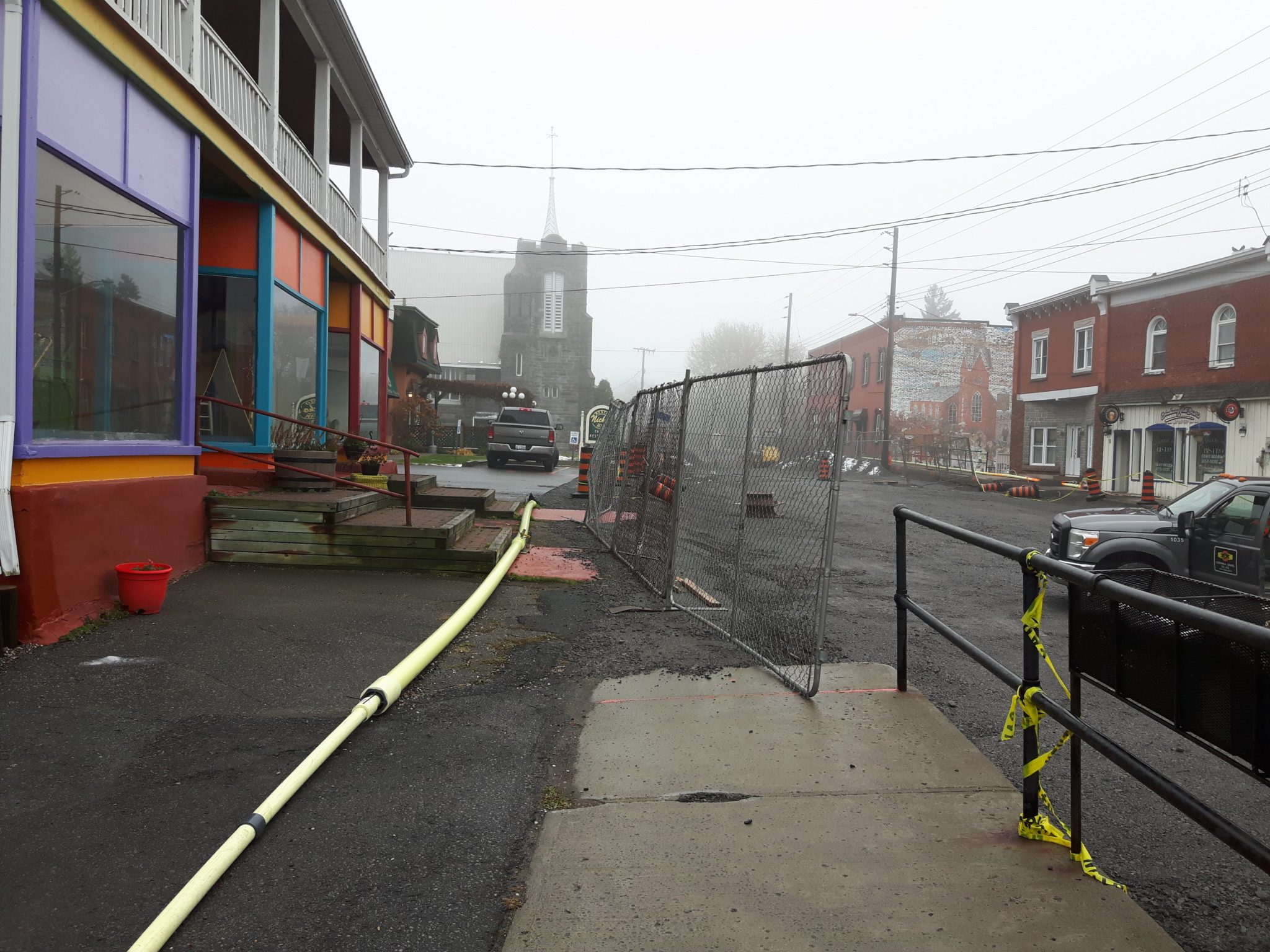 At the end of October 2018, this was the eastern pedestrian access on High Street for those wanting to get to the Creating Centre at the main intersection, or to Nicko’s Resto Bar, Proudfoot Financial or Bedtek Computers in Vankleek Hill.

Business owners along High Street, in the heart of the construction associated with new water mains and storm sewer work, continue to suffer as a result of the street closure, which is now into its sixth week.

Although the main intersection is party open – Main Street and Highway 34 North are accessible – access to several businesses is limited and difficult, if not treacherous for those with mobility issues.

Some businesses were without telephone service for three and half days as part of one outage, due to a Bell line being cut during construction. Yet another outage occurred.

Louise Gouskos, who owns Nicko’s Resto Bar restaurant with her husband, Nick, says they have been purchasing water and boiling water since before Oktoberfest, which she said is their biggest weekend of the year.

Located on High Street, she says her business and others who rely on visitors passing through has been severely affected. As a business which depends on travellers during the summer months, she says that not one unfamiliar face has dined in the restaurant since the start of construction earlier this year.

But it’s been really tough, she says, even while she acknowledges the necessity of the work being done. At Nicko’s and other businesses and residents along High Street, water has been left running as a “trickle” to avoid freeze-ups of the overland temporary water lines.

“If we were not an established business – if we had just opened, this would have been enough to make us close our doors,” she said.

In recent days, residents on High Street have been complaining about frozen water pipes. Temporary piping is running along the edge of the street, connecting residents to the water supply; this piping has been in place for a few months now.

When speaking with The Review on October 23, Public Works Director James MacMahon said, “We have taken measures to ensure that there is no freezing.” The trickle valves have been set up before water reaches the meters of home owners and business owners, he said, which is important as water is billed to residents according to a minimum monthly volume, but also according to additional useage if more than the minimum amount is used.

Nonetheless, the water supply to a few homes has been affected due to freezing temperatures and since The Review spoke with McMahon, residents have contacted The Review to say that their water supply had been stopped due to frozen pipes.

Residents living on High Street from Russell Street to the southern end of town have been reconnected to the permanent water supply. More tests are underway and other residents should be reconnected soon. But in the meantime, a precautionary boil-water advisory remains in effect.

The entire $3-million project was supposed to be completed this year, but early delays related to a subcontractor and discovery of an extra storm sewer that was not recorded on maps have created delays.

There have been nights this month were work was happening after dark in the main intersection, thanks to the installation of extra lighting to permit work to continue after dark.

The main intersection should finally be open for the winter between November 5 and November 9, 2018. Closures will happen again in 2019 as work continues in the early spring, with a June completion date. The work to close one end of Methot Street where it meets High Street did not get done this year. A third “lift” of paving will happen only next year. The section of street from Hamil to Mill Street has not been touched yet, McMahon pointed out.

While the main intersection was closed, heavy truck traffic was supposed to be diverted at Pleasant Corners and at Aberdeen Road. But signs marked, “Local Traffic Only” ended up sending most vehicles on detours around Vankleek Hill. Plus: the one “lane” between two pylons on the lane heading south out of Vankleek Hill at the Aberdeen Road intersection was also being used by local drivers who knew that they could drive into Vankleek Hill from the southern access point.

After the weekend’s wet snowfall, one High Street resident wrote to The Review on Sunday evening, saying, “I have absolutely had it with this mess in front of me and now very difficult access to my house on foot !! Absolutely no consideration has been given to people who don’t manage well on uneven, slippery ground.”

Many local residents have been circumventing High Street and using Pendleton Street, which is parallel to High Street, and it has been identified a a detour. One resident describe Pendleton Street as being: “crazy with traffic and speeding since they have closed High Street between Mill and Russell Street. Temporary speed bumps should have been set in place,” she said.

Contacting The Review via Facebook messenger, the resident said that her dog had almost been hit by a car and a neighbour’s car that was parked on the side of the road was hit by a passing truck and flatbed trailer. She said that the driver had been charged and that the car looked like a write-off. 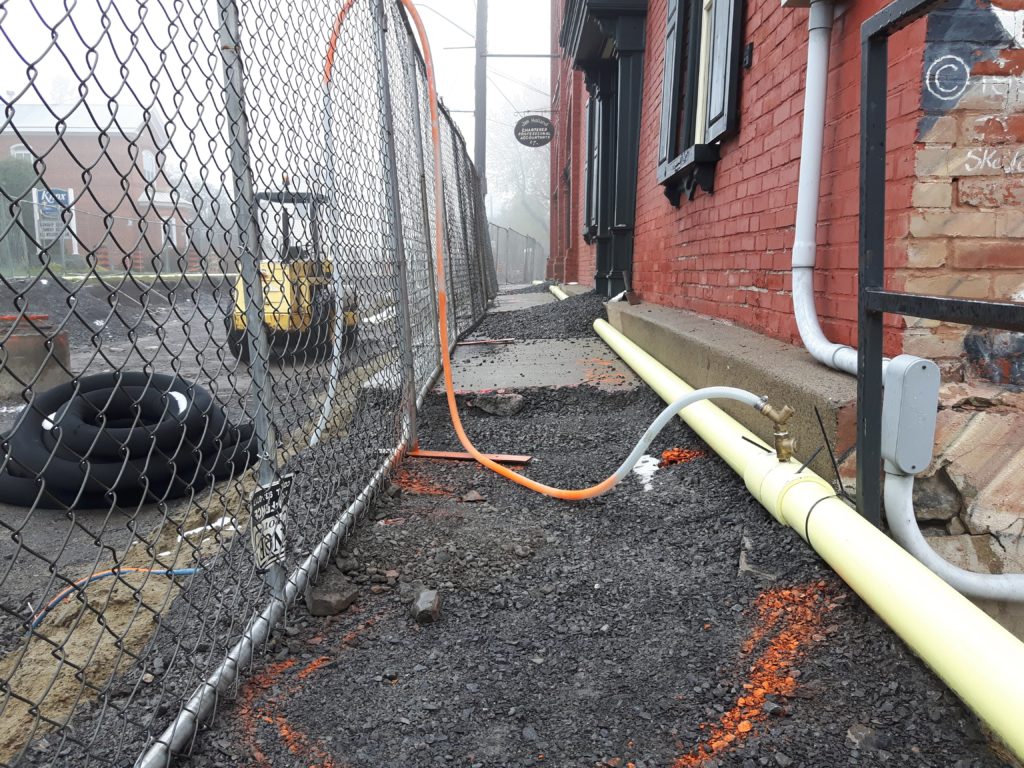 Temporary water lines are on top of the ground, running the length of this stretch of High Street. Gravel is piled over the pipes at business entrances, like this one.