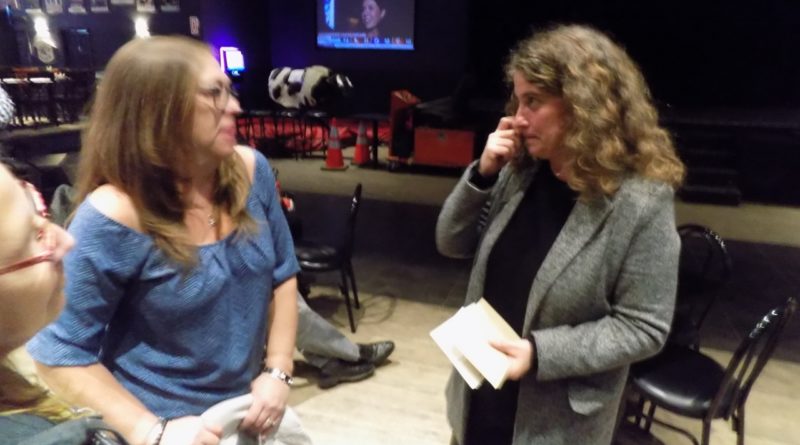 Agnès Grondin is congratulated by a supporter on election night at Top Shot Resto-Bar in Lachute. Photo; James Morgan

It was a night of sweeping political change in Argenteuil and across Quebec. The Coalition Avenir Québec (CAQ) will form the next provincial government and its leader François Legault will be Premier with 74 of the 125 seats in the National Assembly. As went Québec, so went Argenteuil. CAQ candidate Agnès Grondin won the district by 5,405 votes over Patrick Côté of the Parti Québécois (PQ). The CAQ defeated the Liberals under Philippe Couillard, who will form the official opposition with 32 seats.

Grondin, who lives in Gore and has previously worked as the environmental consultant for the MRC d’Argenteuil, was not surprised by her win. She seemed calm but enthusiastic about moving ahead with her new role when she greeted a small group of her supporters and journalists at the Top Shot Resto-Bar in Lachute on Monday evening. Grondin said her first priorities will be getting her office set up and meeting with groups of citizens while adjusting to life between Argenteuil and the legislative building in Québec City.

As she had said during previous conversations in the campaign, Grondin emphasized how the CAQ wants to be more responsive to local needs and develop local solutions for local problems. She said this approach will be applied to local problems related to the hospital and long-term care. Grondin said consultations with municipalities and residents are necessary for ensuring a strong future for the Lachute hospital, which has had some of its services reduced and transferred to St-Jérôme. Her priority is ensuring existing services are kept at the hospital and that ones which were lost are returned, or that new ones are added.

Given her municipal background on environmental conservation issues, Grondin said she plans to have a major role in the CAQ government’s approach to those matters. “I have a strategy,” she said about those plans, again emphasizing the need to be responsive to municipal and regional needs. When asked if she may have a greater role within the government, Grondin said it is up to Premier-elect Legault to decide.

The CAQ is generally seen as a more francophone-based party. Grondin however assured the sizeable anglophone population of Argenteuil will be equally and fairly represented by her. She again referred to her municipal work experience which involved meeting regularly with various residents and said every citizen matters.

There is an ethical question Grondin plans to have resolved quickly following her election. Her partner is Scott Pearce, Mayor of Gore Township. Grondin said both want to consult with the ethics commissioner to be sure there are no conflicts of interest due to the relationship.

Grondin’s win is historic.  She will be the first woman to represent Argenteuil in the legislature and the CAQ win marks only the third time since Confederation that the riding will have representation that is not Liberal or Conservative. The CAQ win is historic for Québec. The province has see-sawed between Liberal and Parti-Québécois governments since 1970. The last non-Liberal or PQ Premier was Jean-Jacques Bertrand of the now defunct Union Nationale party.

Yves St-Denis, the incumbent representative who was removed from the Liberal caucus earlier this year, ran again as an independent but finished fourth behind Québec Solidaire candidate Céline Lachapelle with just over 1,300 votes.

“I’m disappointed,” said St-Denis at his campaign headquarters in Lachute.  He said the local results would have been much different if it weren’t for the CAQ wave that went across Québec. He said his independent polling showed the results were much closer but that things shifted over the last weekend of the campaign towards the CAQ. As for future plans, St-Denis said, “I’m going to relax now,” and plans to focus more on his businesses which include storage lockers in the Laurentians and a publicity business in Repentigny.

Bernard Bigras-Denis, the Liberal candidate whom the party selected to replace St-Denis, was clearly disappointed with the results.

“It’s obviously not what we expected,” he said, and added he had been campaigning since May 25. As for any future attempts at elected office, Bigras-Denis said he plans to stay engaged and informed but has to decide if his involvement will be as a candidate for elected office or doing the behind-the-scenes work he has done for many years. Bigras-Denis said the CAQ victory was part of a trend across Québec and was hard to confront.

“It’s a wave, and you can’t fight waves,” he said.  Bigras-Denis said Yves St-Denis independent candidacy was not a factor in his loss and said, “Liberals stayed Liberals” and continued to support him.

By 3:04 Tuesday morning when Élections Québec confirmed the official results, Bigras-Denis had placed third in Argenteuil, earning 5,305 votes compared to 6,442 for Patrick Côté of the Parti-Québécois.  Côté’s second-place showing was a surprise in Argenteuil and went against a trend of defeat on Monday night for the party founded by René Lévesque that twice attempted to take Québec out of Canada. The PQ finished fourth and will have just nine seats in the National Assembly. Left-leaning Québec Solidaire came in third with 10 seats.  PQ Leader Jean-François Lisée did not win his own seat and resigned as party leader.

According to Élections Québec, voter turnout in Argenteuil was 65.3 per cent across 158 polling stations.  30,473 ballots were valid and 457 were rejected.