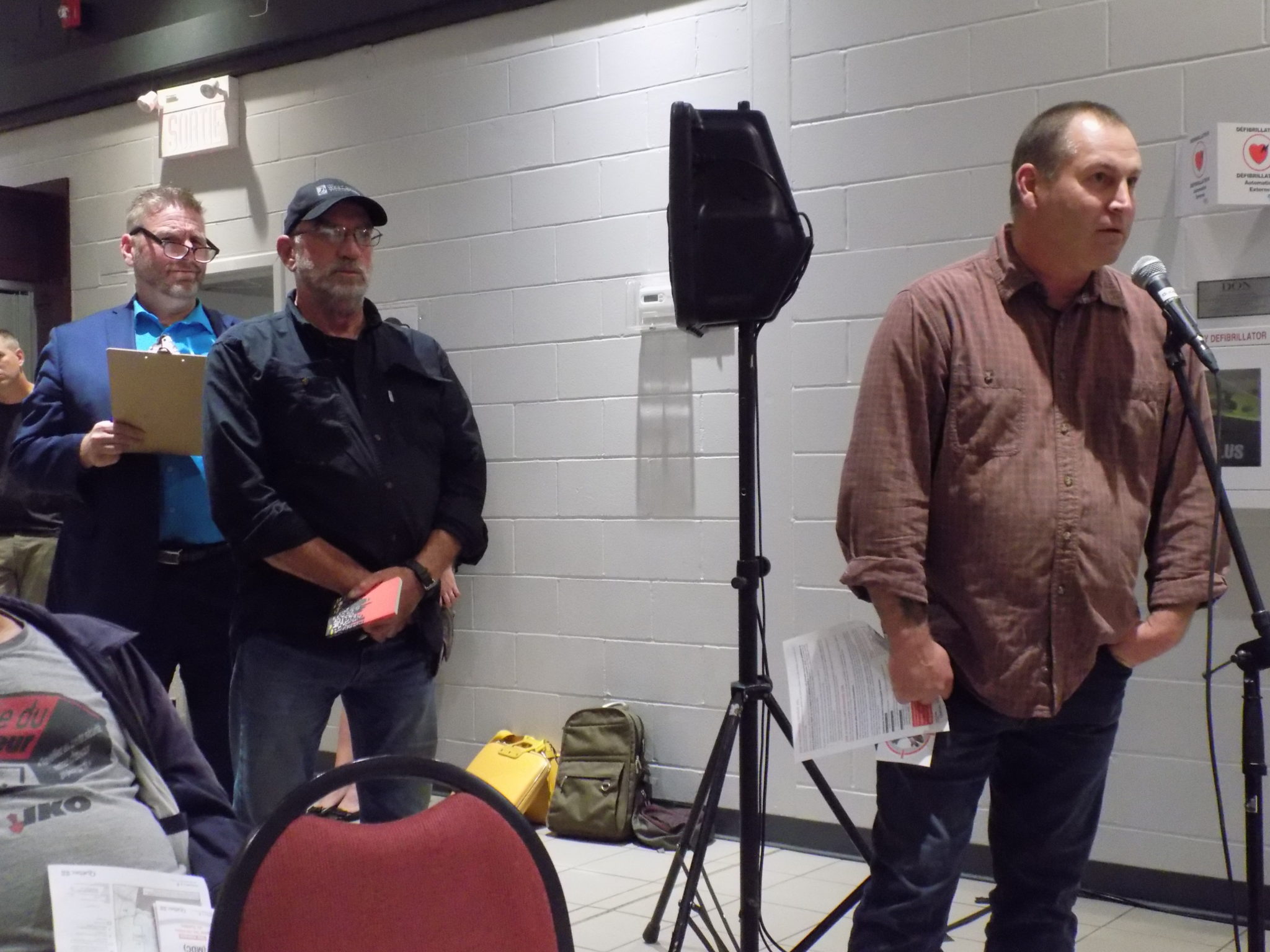 Audience members in line to ask questions about Chronic Wasting Disease at a public meeting in Grenville. Photo: James Morgan

Many local residents are not pleased with how the provincial and federal governments are responding to the first case of Chronic Wasting Disease (CWD) in Québec.  At the public meeting held in Grenville Thursday night (September 27, 2018), and in a telephone conversation with a resident who contacted The Review, objections to how wildlife conservation and food inspection agencies are acting have been strong.

During the question-and-answer period of the meeting, François Perrault of Harrington questioned what kind of effects the culling of deer would have on the local deer population and the sustainability of hunting in the area.  Biologist Donald Jean of the Ministère des Forêts, Faune, et Parcs du Québec (MFFP), said that the department’s intervention is about reducing the risk of CWD spreading.  Perrault also expressed concerns about possible risks to human health.  Veterinary Officer Dr. El Mehdi Haddou of the Canadian Food Inspection Agency (CFIA) emphasized there is “no risk” of CWD being transferred to humans.

Harvey Young of Avoca Road in Grenville-sur-la-Rouge was quite angry with the government officials.  “I hope you have thick skin,” he said to the panel as he began his comments.

“You are not doing your job!,” Young shouted, pointing to Veterinary Officer Dr. El Mehdi Haddou of the Canadian Food Inspection Agency (CFIA).  Young criticized the CFIA for not confirming the rumour that the case of CWD was found in a domestic deer from the Harpur farm in Boileau and questioned why the remainder of the herd was only quarantined and not killed.

Young said the MFFP was the only government agency doing its job, but he had harsh words for it too.  He blasted the hiring of an American team of sharpshooters to cull the deer in the control zone and called it “the biggest poaching operation in Québec.”  The team is culling deer at night.  They travel by truck through the forest, shining high-powered lights through the woods to attract deer.  The practice is known as “jack-lighting” and is illegal for regular hunters do use.  Young complained that the hired Americans are being allowed to do things local hunters would be charged for doing.  He questioned why the MFFP did not enlist local hunters to participate in the cull instead and said when CWD was discovered in Saskatchewan, authorities there enlisted local hunters to assist with the cull. Young summed up his frustration with the government response with, “It’s deplorable what you’re doing.”

Additionally, Young alleged that wildlife protection officers were entering private property to set out bait for deer to be killed without first getting the permission from property owners.

Earlier in the week, Edward Hill of Harrington contacted The Review to voice his disappointment with the CWD response.  Hill also owns property in Grenville-sur-la-Rouge. Hill believed authorities have been too slow in communicating with residents about the measures being taken.

Hill was not pleased with the American shooting crew doing their work at night either.  He said rifle shots woke him up early Monday morning and heard shots during the nights.  “I don’t want Americans coming over here with their high-powered rifles with scopes,” Hill said, also commenting that the shooters are using the otherwise illegal jacklighting technique.

Hill said all area residents should have been better informed from the beginning and authorities should have left printed notices at homes explaining what was happening.