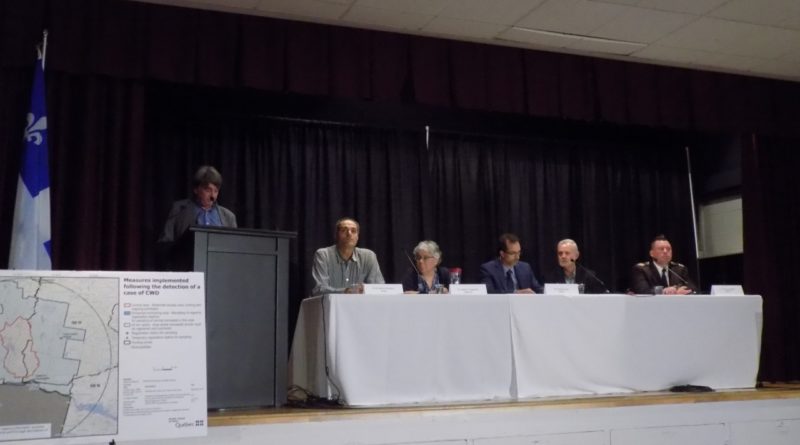 At a public meeting which took place in Grenville on Thursday evening, September 27, Québec and federal officials have defended their response to a case of Chronic Wasting Disease (CWD) in local deer in the area north of the Ottawa River.  The case was found in one deer in a domestic herd, rumoured to be in Boileau, but officials will not confirm the exact farm or location. This is the first case of CWD in Québec.

CWD attacks the central nervous system of deer. The animals become emaciated, disoriented, lose control of bodily functions, develop extreme thirst, and eventually die. Not all deer infected with CWD initially show symptoms, but all deer infected will inevitably succumb to it. CWD is only found in Cervidae or Cervids, the family of animals that deer and moose belong to.

Dr. Haddou said CWD was first found in Colorado in 1967. The first case in Canada was found in 1996 in Saskatchewan. CWD also surfaced in three other states in the early 2000’s. It has also been found in South Korea and Norway.

“It’s not proven that a human can contract the disease,” Haddou said, after explaining that CFIA researchers at a laboratory in Alberta did successfully transfer it to monkeys. The CFIA is responsible for all food safety at the federal level, including federally-licensed abattoirs where both domestic and wild deer may be butchered. Haddou said that despite there being no risk to humans, the CFIA is committed to eliminating any risk of CWD-infected meat entering the food supply. The federal agency has quarantined the herd where the infected deer was discovered.

MAPAQ is responsible for food safety at the provincial level, including all abattoirs that are regulated by Québec’s meat inspection laws. Dr. Hélène Trépanier said their objective is to control and eliminate all risks to food safety. According to Trépanier, Québec strictly controls the importation of domestic deer from outside the province and operates a regular surveillance program at the abattoirs under its control. Tests for various animal diseases are taken as part of that program and the results determine if MAPAQ needs to make recommendations to the public health agency so the public can be alerted about unsafe food. Trépanier emphasized that there is no evidence that humans can contract CWD and that the local case only involved one deer, but that as a precaution, no diseased deer meat can be allowed for human consumption. Trépanier noted that MAPAQ began preparing for the possibility of CWD in Quebec in 2002.

Donald Jean of the MFFP said “Measures were put in place quickly to eradicate the presence of the illness,” and added the risk of CWD spreading in Québec is low. He explained how the MFFP has created a series of zones to investigate and eradicate CWD. The control area affects part of hunting zones 10E and 9O in Grenville-sur-la-Rouge, Harrington, Notre-Dame-des-Bonsecours, and Boileau. All hunting and fishing in that area is now prohibited until November 18.  Off-road driving at any time of the day is also prohibited.

The enhanced monitoring area around the control area that also covers the same hunting zones.  Hunting, fishing, and off-road travel are still permitted in this area, but all deer and moose harvested must be taken to one of the registration stations that have been set up so that samples can be taken for testing. Those stations are at the municipal garage in Grenville-sur-la-Rouge, Co-op Laurel-Station in Wentworth-Nord, Depanneur Telmosse in Mont-Tremblant, Sport NR in Notre-Dame-de-la-Paix, and Débitage des Cantons in Lochaber. Removing parts of deer and moose from this area is prohibited and hunters are required to butcher within a 45-kilometre radius.

Patrice Massé of the MFFP said wildlife protection officers are taking a two-phase response to CWD. He said that because most of the territory in the control area is private land, they need the cooperation of landowners, so officers and cull-hunting crews can effectively carry out their job. Masse and Jean both said a team of expert American shooters was hired to cull the deer and four enforcement agents were specially trained for assisting with the operation as well. The officers are approaching property owners and asking for their cooperation. The shooters are traveling to the sites and doing their work at night. Massé said since September 22, 45 deer were killed in the control zone and all tested negative for CWD.

According to Massé, the second phase of the MFFP response is to conduct patrols to keep people informed and off restricted lands to avoid the potential for contamination of neighbouring sectors.  He said this is necessary to ensure the long-term health of the deer and moose population.