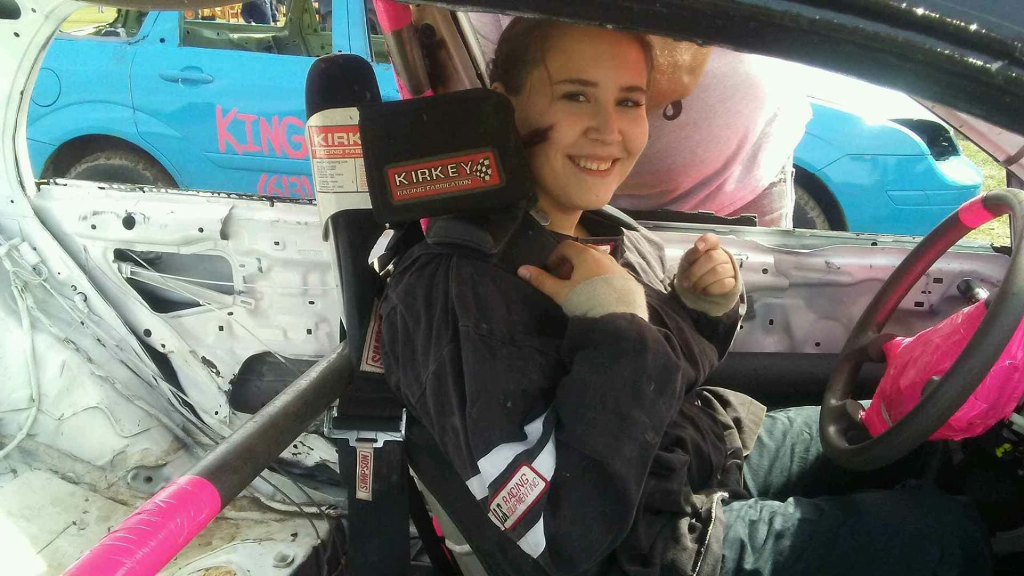 You could say that Kyana Sauvé is following in her mother’s footsteps!

Plantagenet resident Kyana Sauvé discovered DIRT oval racing while her mother, Elisabeth Gauthier, was racing in Mini-Stock class at Cornwall Motor Speedway during several summers. Ever since, Kyana has had a dream: to jump in a car and race on the same track as her mom did. Her dream came true last weekend when she took part in the annual Fireball Enduro (which is like a giant demolition derby except that the drivers are going around the quarter-mile oval track with the objective to be the first to do 50 laps) in the ladies’ class in a car built by Richard Leblanc.

“I started 27th and first, I took the time to figure how my car was holding the track. It wasn’t only a matter of speed, but also agility to avoid stalled cars on the track,” says the 18-year-old university student.

“When the checkered flag came out I knew that I had done a good race, but I was far to imagine that I was second, not far from the victorious car!”

Her mom, Elisabeth had this to say about Kyana: “I was so proud of my daughter! Watching how she first tested how the track felt and then started her way towards the front of the pack, I told myself “She’s racing just like I was and she’ll probably be superior to me!”

Will Kyana Sauvé race a Mini-Stock car one day?

“I’m already looking for an Enduro car for next year and as for being a regular Mini-Stock competitor I think there’s a long way to go however the possibilities are there.” Then, laughing, Sauvé concludes: “The real challenge will be to persuade my mom’s boyfriend to build me a race car!”

A dream came true for Kyana Sauvé as she enrolled in her first-ever Enduro race last weekend at Cornwall Motor Speedway.