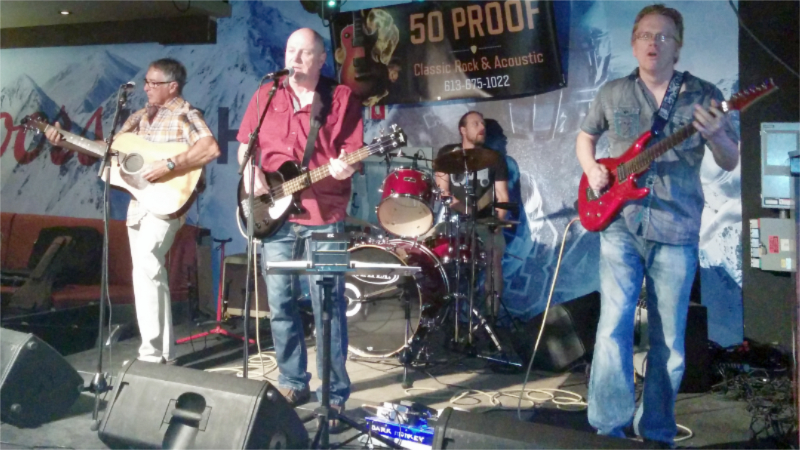 Classic rock fans, to your stations! Just when you thought the seventh edition of the Vankleek Hill Food Bank Jamboree couldn’t get any better, enter 50 PROOF.

Jamboree veterans, 50 PROOF are scheduled to bring their electric and uplifting take on rock’s best classics, aiming at making those present get on their feet and dance.

The band’s name is inspired by alcohol proof labels. Since 90 PROOF was already taken (by many), the band opted for 50 PROOF – 50 being the band members’ average age.

“We started off as a classic rock band and we still are,” said 50 PROOF lead singer and bass player Reid Masson.

50 PROOF are known for their electric and acoustic shows. When asked what version of 50 PROOF will be on stage at the jamboree, Masson answered :

“Electric, my friend! We haven’t done an electric show in a while, so we are really ready to go! We used to do electric shows 80% of the time, but now it’s almost the opposite.”

While he didn’t divulge the band’s setlist, Masson did provide some direction as to the tone 50 PROOF will present to its audience.

“We’re playing at 7 pm and I’ve been there every year. I know 7 is the time people like to dance, so we’ll play a set list that is more up-tempo. We’ll try to keep people dancing for one hour and prepare them for the next two bands.”

Back when they first played the jamboree, 50 PROOF had only just started, having only a handful of shows under their belt.

Anyone wishing to know more about 50 PROOF can visit their Facebook page (@50proffrock) or the band’s website, at 50proof.yolasite.com.

The seventh edition of the fundraiser Jamboree for the Vankleek Hill Food Bank is taking place on Saturday, July 7, 2018, from 2pm to 11pm. Organizers are excited about welcoming Wayne Rostad, having booked him a year ago for this event! The Alleykatts, the Stray Dogs and other entertainers are all listed on the event page on Facebook.

Advance tickets are on sale at The Windsor Tavern, The Review and at Depanneur Lalande in Vankleek Hill.