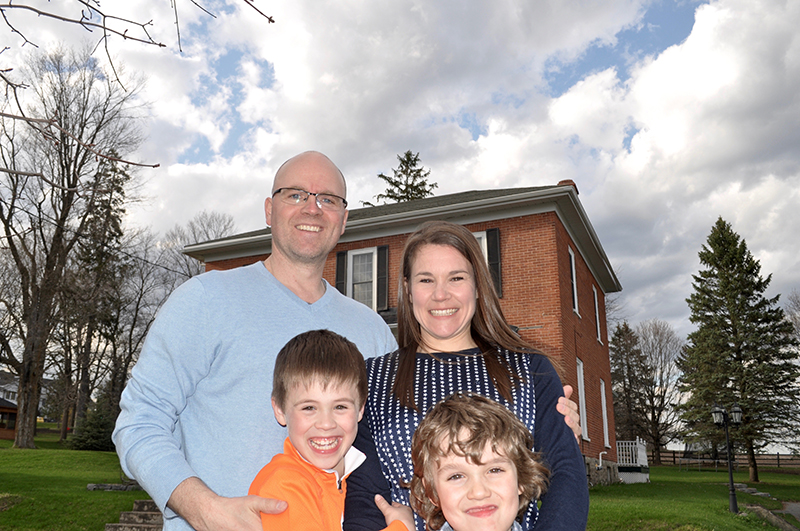 Peter Barton and his wife, Anne-Marie, live in this home on Main Street in Vankleek Hill, with their sons Jack and Brooks.

Peter Barton believes that in a small town, everyone has to do his or her part. And he has the clear feeling that his time is now to do something big. He has decided to run for councillor in the ward of Vankleek Hill in the October 22 municipal election.

Barton has grown up in Vankleek Hill and said that nothing made him happier than to be able to move to Vankleek Hill with his wife, Anne-Marie, who is from Hawkesbury. Moving back to his home town to raise their family was a decision that was easy to make. Now the father of two boys, he says it is great to be close to their grandparents.

It has become clear to him that the community can achieve the balance of being a great home to all generations, but “A community is what you make it,” he says.

“I feel like this is my way to give back to a community that has given so much to me,” continued Barton, who has been a full-time firefighter with the City of Ottawa and more recently, has become the department’s Safety and Innovation officer.

“I still respond to emergencies, but my concern now is more about the firefighters and how they respond to an emergency. This job also gets me into strategic planning and operating procedures,” Barton explained, although he says he does miss being a firefighter on the front line.

One thing he has learned during his almost 20-year career with the City of Ottawa and in his recent job especially, is the importance of communications. He says one has to take contentious issues and listen to points of view and let people be heard.

Helping people understand each other and find solutions to disagreements is a skill he says he uses every day, everywhere, from work, to being at home with his two kids.

Barton is also a qualified paramedic and was a part-time instructor at Algonquin College while he was working. He recently stepped back from additional work he was doing, which involved advocating for firefighters in connection with Workers Compensation. That work was more about mitigating issues and explaining the legislation, but it was also very serious, too, involving firefighters’ health and wellness at work and off the job. But after eight years, Barton decided to take a break from that work and now, he says, with extra time on his hands, he decided to become a municipal candidate.

“I know what a life dedicated to a municipality looks like. I have seen it first-hand – not just my Dad, but Mayor Aurele Fournier and before that, Mayor Pierre Perreault.”

Going back to the basics – municipal services and the infrastructure, is something Barton wants to do, as well as some long-term planning and looking for efficiencies. But he is aware of the challenges.

“It’s tough. There’s no more government money out there.”

Municipalities have a role in economic development but “you can’t tax any more. There is one pot of money. We need to support our businesses because they are behind so much of what happens here.”

When asked about the proposed cement plant for Champlain Township, Barton said he knows Action Champlain has a plan of attack.

“I have not been at those meetings and would not want to comment on it. I know it’s about health and wellness and there is another argument about bringing jobs here. Everything needs to be fact-checked and we need information from a responsible source to have a balanced conversation about it.”

Barton says his father has been quietly supportive since he learned his son was going to run for councillor.

“I know not everyone agrees with everything he has done, but I don’t think anyone would say my dad did not care — he cares about everything.”

Involved with the Canada Day softball tournament in Vankleek Hill as well as being a hockey coach and a soccer coach, Peter Barton says he will be out in the community at social events, but he also has plans to go door-to-door to meet people.

He can be contacted by email at: [email protected]