Joey Desjardins, competing for the dream 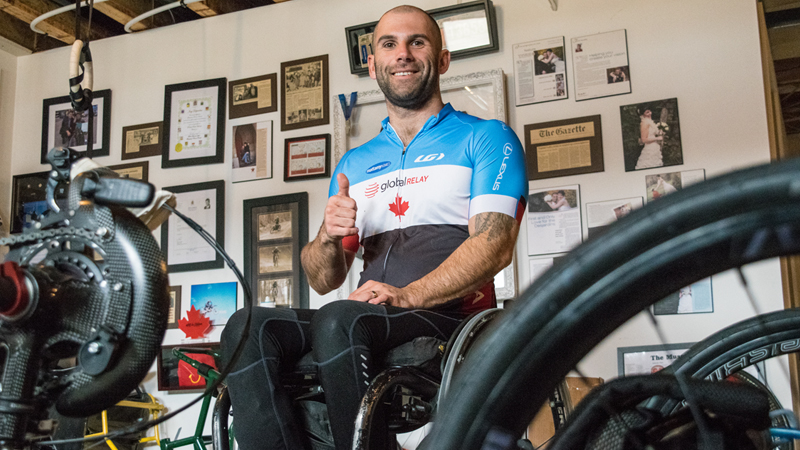 Desjardins next to his brand new handcycle, in the middle of his home gym. (Photo credit: Cedrik Bertrand)

Joey Desjardins doesn’t mess around. After an injury took away the use of his lower body back in 2009, he wasted no time getting on a handcycle and, by 2014, he was training for competitions.

“Getting off the chair and on the bike gave me independence. I learned that it was a popular competitive sport. I did a few training camps with Cycling Canada and soon after I did it full time,” said Desjardins.

Nowadays, a good portion of his time is dedicated to handcycling. On a typical training day, Desjardins eats breakfast, follows up with stretches using elastics, followed by a 15-minute warm-up on the bike and then, a two-hour session. Once all that’s over, he stretches again and heads directly to the kitchen for some well-deserved food.

When asked what the sport brought to his life aside from the obvious physical benefits, Desjardins shared an interesting insight.

“It’s a great stress reliever, true, but I have to focus on the sport; on the bike. I can’t use the sport for stress relief. If something happens, like an injury, and I have to stop as a result, I lose my main stress reliever. It can’t be the only thing.”

Wise advice that can (and should) be followed by all of us.

Desjardins has been competing in a variety of world-scale events for a while, now.

One of the recurring competitions is Montreal’s Défi Sportif AlterGo, an event that hosts national and international competitions in an annual spring event, bringing together over 5,000 athletes with functional limitations (for more details, visit defisportif.com).

Desjardins has participated to Défi Sportif since 2013, but spring 2018 might bring a difficult albeit interesting choice, the event almost overlapping the 2018 UCI Para-Cycling World Cup in Ostend, Belgium.

“There are three World Cups every year, through which you can qualify for the annual World Championship. The event is May 3 to May 6, 2018, and I’ll be competing.”

Desjardins has been training hard for the Ostend cup. Once there, two trials await him: an 18-kilometer-long time trial and a 50-kilometer-long road race.

“It’s relatively short. These races can ben 60 or 75 kilometers long, sometimes,” said Desjardins, adding with confidence that he trains for 50 kilometers almost daily.

After all these years of training, Desjardins has one dream he has yet fulfilled: competing in the Paralympics.

“The last summer games were in 2016, in Rio. It’s really competitive. I’m aiming for Tokyo 2020, but over the next couple of years, I need to earn a lot of ‘top fives’ in events to simply be considered. This year, I’m aiming for top ten positions and next year, top five. I try to remain honest with myself, so I’m not telling people I’m officially competing. I’m simply working hard to qualify.”

Desjardins has a lot of well-deserved support, a must since the equipment needed to train and compete is both specialized and expensive. He clearly appreciates the many sponsors that support him, having recently acquired a brand-new state-of-the-art handcycle.

While, like all of us, Desjardins awaits the arrival of spring’s warmer days, he keeps training for his upcoming event while taking care of his two-and-a-half year old daughter, while awaiting the birth of his second child in the upcoming days.

Desjardins indeed has a lot to look forward to in 2018, and so does everyone who passionately follows his career as an athlete.

If anyone out there wishes to support and follow his progress, seek him out on Facebook (@paracyclingathlete). One of his sponsors, Hawkesbury Rotary Club, will also be hosting a spaghetti dinner for the whole family as a fundraiser on June 1, 2018.

About the Paralympic Games

The roots of the Paralympic Games can be traced back to the end of World War II, when a Stoke Mandeville Hospital spinal injuries centre allowed a rehabilitation sport to eventually grow into a competitive sport.

The initiative was spearheaded by Dr. Ludwig Guttmann, who then organized the first competition for wheelchair athletes on the opening day of the 1948 London Olympic Games. In 1960, the first edition of the Paralympic Games took place in Rome and featured 400 athletes from 23 countries.

These days, the games are split between summer and winter, with the next summer games being in Tokyo, in 2020.