Fine and Dandy: A true (and sweet) labour of love 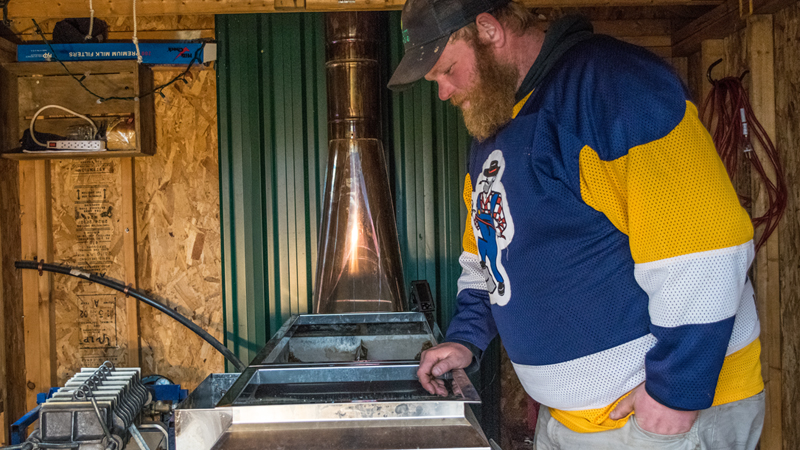 Dandy standing over the duo’s evaporator. Soon, they wish to open a bigger shack, complete with a store. For the time being, the duo preferred to invest in new equipment, concentrating on the quality of their products. (Photo credit: Cedrik Bertrand)

For three years, Matthew Dandy and Scott McCaig have been spending that “limbo” time between winter and summer building what is today known as the appropriately named Fine and Dandy, a line of maple products crafted to perfection in their own backyards.

“This is our third year doing it,” said Dandy. “The first year, we only had 30 buckets. The second, last year, we had 200. This year, we installed a full pipeline system hooked to a vacuum pump for 325 trees, plus 30 buckets. This effectively doubles production.”

The tapped maple bush is on Dandy’s property and the shack on McCaig’s.

“This is the first year we do a real, proper setup with all the right equipment. We also have a Fine and Dandy logo on our product. It’s a great hobby that brings in a little bit of income,” said Dandy.

Even though the season isn’t quite over, the duo made between 140 and 150 gallons of maple syrup.

According to Dandy, a good season requires a good freeze during night time, lasting a couple of hours, followed by a nice, moderately warm spring day. It’s all based on atmospheric pressure. When it lifts, the trees suck up water and nutrients from the ground; they release some of it when the pressure rises once more. The mild warmth (2, 3 degrees Celsius) also prevents bacteria that stop production.

In other words, spring 2018 might have been on the disappointing side for humans, but it clearly motivated our maple trees to work overtime.

Fine and Dandy has a variety of maple products for sale. Anyone interested in this great venture should visit the duo’s Facebook page, Fine and Dandy Maple.

Keep scrolling down to see more pictures of the Fine and Dandy operation! 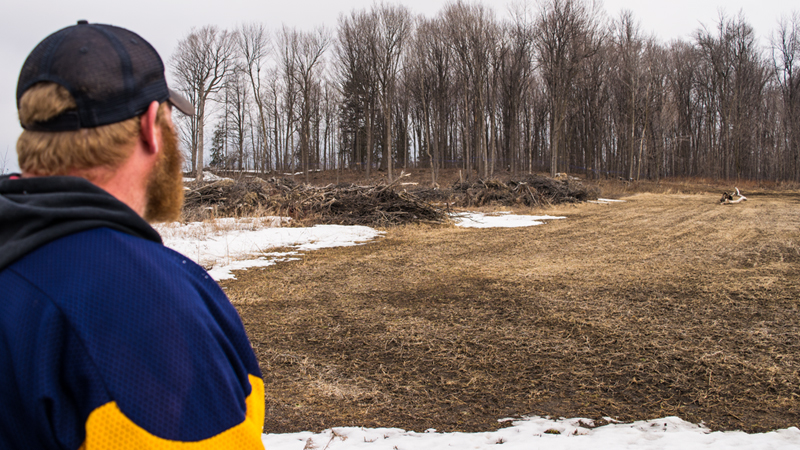 Dandy overlooking the maple bush. Surrounded by farmland, the little oasis is a veritable paradise for maple trees, it being high and dry. (Photo credit: Cedrik Bertrand) 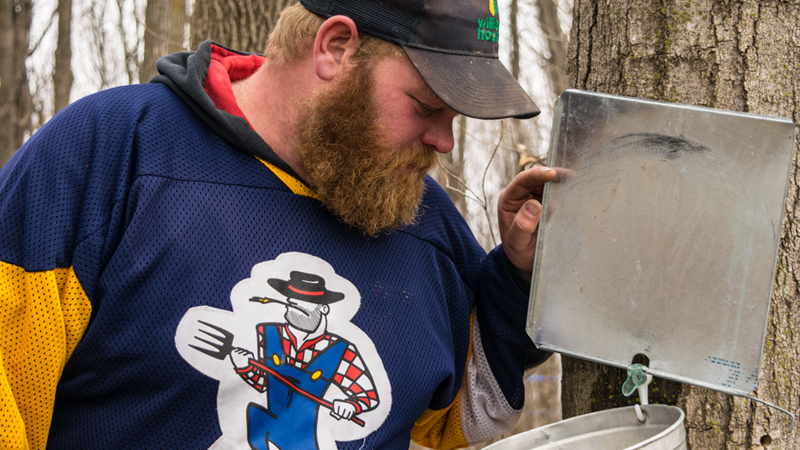 Who doesn’t love the feeling of peeking in the bucket to see if it’s full? Even though he has a fully automated pressure system this year, Dandy still keeps buckets on 30 trees. On the morning of April 12, 2018, many of them were well on their way. (Photo credit: Cedrik Bertrand) 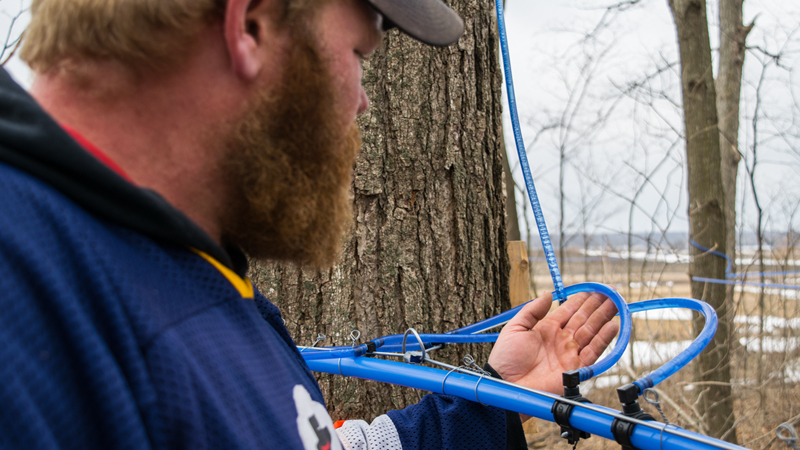 This year, 325 maple trees are tapped using the pipeline. Some of Dandy’s trees are so old that their size allows for three or four taps. The smaller lines go into a lower, wider main line that’s hooked to the pump. (Photo credit: Cedrik Bertrand) 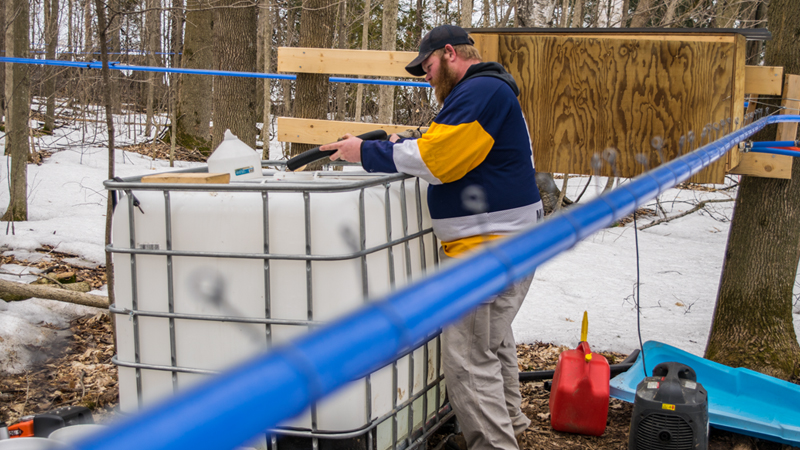 Dandy’s pump setup is ideal for 400 trees and under. The duo tapped on February 24 and the season is still going on April 12. (Photo credit: Cedrik Bertrand) 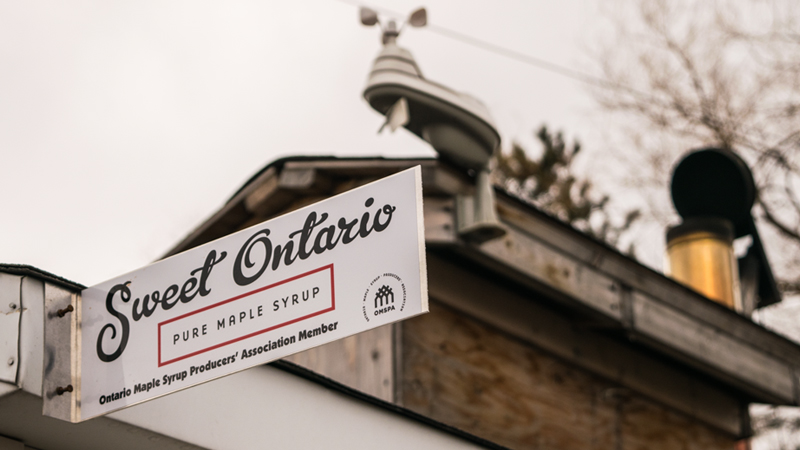 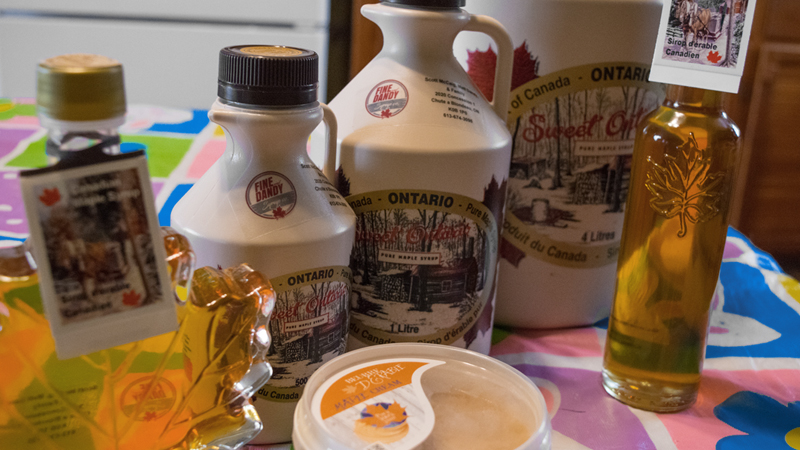