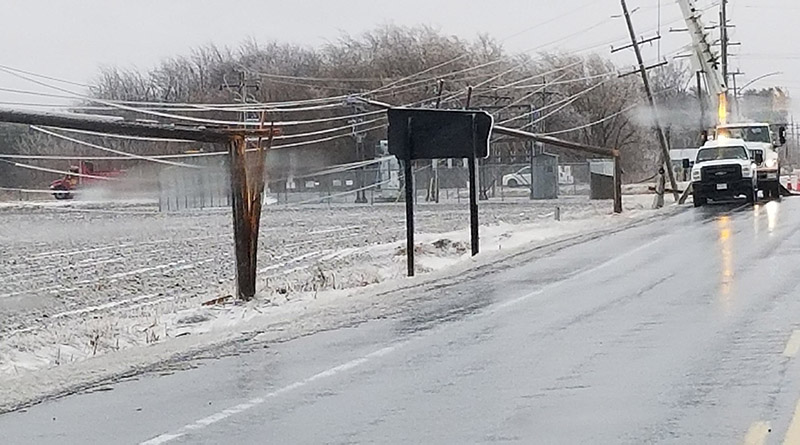 Chad Ozen shared this photo taken near St-Isidore on April 16, 2018.

As of Tuesday afternoon, hundreds of people were still without electricity in Eastern Ontario after a slow-moving ice storm, which included high winds, heavy rain and ice pellets, passed through the region late Sunday and during the day on Monday.

Thousands of people across Ontario were without electricity and locally, the region was also hard-hit, with continuing power outages on Tuesday in parts of Clarence-Rockland, The Nation Municipality, Russell County, Alfred-Plantagenet and the Laurentians.

Across Ontario, there were about 300,000 homes and and businesses without electricity in the early part of the storm. In all, Hydro One says it has restored power to more than 425,000 customers and is working to restore electricity to 30,000 more homes or businesses with power.

While some Hawkesbury residents and Vankleek Hill residents did have brief power outages on Monday, power to those areas was restored within a few hours. Power to most L’Orignal residents seemed to be uninterrupted despite the storm.

Locally, downed tree branches, falling trees and downed electricity lines blocked roads and some streets, while the ramps to some highways were closed for the same reasons.

Temporary shelters were open on Tuesday at the St-Albert Community Centre at 201 Principale Street, St-Albert, at the Limoges Fire Hall, at 673 Limoges Rd, Limoges and at the Clarence Creek Arena, at 418 Lemay Street, Clarence-Creek.

Alfred-Plantagenet has established a shelter at the Plantagenet Community Centre, located at 220 Main Street in Plantagenet.

While several previously closed roads have been opened, Boudreau Road, between Lalonde and Sussell Roads is still closed, due to the ice storm, while Johnston Road, between Russell and Ettyville Road is closed due to flooding.

Warning centers were located at 1195 South Russell, Russell, at 717 Notre Dame, Embrun,  and at 1215 St-Augustin, Embrun. Residents are advised to stay away from hydro line and watercourses. Parents are encouraged to explain these dangers to their children. The primary focus of the OPP is to ensure the safety to those who are being affected by the power outage.

The OPP are also encouraging the public to visit www.nation.on.ca, www.russell.ca, www.clarence-rockland.com for updates. Please report any power issues to Hydro One and issues with the roads to the municipalities, instead of calling 911.