Appalachian music and more by Brad and Ken Kolodner 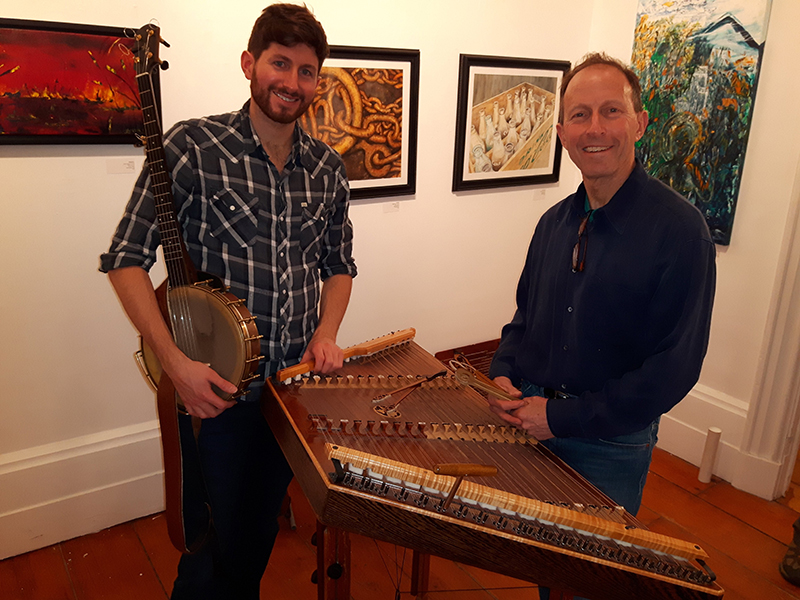 Brad (left) and Ken Kolodner were the featured performers at the fifth of six Home Routes concerts, which took place at Arbor Gallery on March 16. The father-and-son duo played (are you ready?) fiddle, clawhammered banjo, gourd banjo and hammered dulcimer. Ken explained that the hammered dulcimer is an old instrument which may be the piano’s predecessor. As with most of the Home Routes performers, their musical connections and cross-genre repertoire (Appalachian tunes, Gordon Lightfoot and John Prine, just to name a few themes), along with te-tapping fiddle tunes and reflective solo pieces on the hammered dulcimer, was enjoyed immensely by the full house at Arbor Gallery. You can find out more about this duo online and the many other musical endeavours in which they are involved. For instance, Brad hosts his own bluegrass radio show on WAMU’s Bluegrass Country, a 24/7 bluegrass radio station in Washington D.C. and has more than 30 banjo students in their home-town of Baltimore.
The next Home Routes concert takes place on April 21 and is called “Tower of Song”. A Victoria duo, Oliver Swain and Glenn Garramone, will pay tribute to Leonard Cohen and his music with their own unique renditions.
Home Routes concerts are organized across Canada and include various circuits in different parts of the country. When you sign up to be a host, as Pat Deacon and Derek Evans did, you agree to organize the concert venue, promote the concert locally and usually, host the concert and the performers for one overnight in your home. Although they host the performers in every way, long-time Home Routes hosts Deacon and Evans made arrangements to rent Arbor Gallery since their move to Vankleek Hill, because they felt their home did not have the space for an audience and now, the concerts hosted at Arbor Gallery can welcome more people. Follow the Vankleek Hill Home routes page and check this page in The Review for news of upcoming Home Routes concerts. And one more thing: the cost to attend concerts is $20 per person and all of those funds go to the performers.
Read about the Tower of Song here.