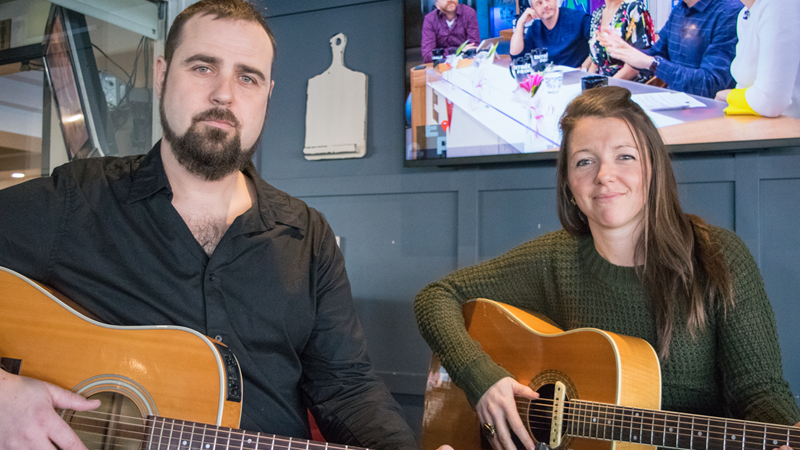 Pointe-au-Chêne native Marie-Ève Vézina has a deep-rooted passion for the beauty and authenticity of music.

And once in a while, she shares her passion and talent through a live performance alongside her partner and boyfriend Johnny Hayes, usually in a cozy, intimate venue.

The evening of February 14, 2018, was such an occasion, as Vézina and Hayes were playing for the Valentine’s Day crowd at Plantagenet’s Place 1967 restaurant.

“Growing up in Pointe-au-Chêne was pretty quiet, so I had plenty of time to feed my passion for the guitar,” said Vézina, a few hours before the show.

True, part of Vézina’s notoriety comes from her singing voice, but the guitar represents the doorway through which she discovered her talent.

“A friend of mine played guitar. She taught me a few chords. Then I heard this other girl compose… That’s when I heard the call. I love to write, so I wrote a few songs. Johnny and I made a record once, but it was a personal thing and we never published it. Recently, we started thinking about making a more “official” record.”

Vézina and Hayes form a duo called Johnny and ME, “ME” being Vézina’s first name.

“Johnny has a lot of experience playing live, but I still consider myself a newcomer on the live scene. I’ve been playing shows since 2015,” said Vézina.

Even though the experience of playing live is fairly new to her, Vézina reiterates that music has always been a big part of her life. When asked why it took so long for her to perform music in front of audiences, Vézina answered:

“Opportunity and timing. And children. Johnny and I have been together for 15 years and we have two daughters, a nine-year-old and an 11-year-old.”

That doesn’t mean Vézina is a stranger to the concept. Even when not playing guitar or singing, Vézina still manages to find an audience.

“I give IT courses for the City of Lachute to working and retired adults. I also design courses for the Coalition ontarienne de formation des adultes (COFA). It allows me to work part time. I don’t do full-time jobs.”

As singer-songwriter-musician (and all-around music lover), Vézina is inspired by many legendary artists.

“I listened to a lot of Janis Joplin and just as much Cranberries. These days, I’m into Norah Jones, Adèle. We love Cat Stevens,” said Vézina, to which Hayes added:

“We really listen to everything. Bob Marley, Elton John…”

The venues Vézina and Hayes like to play are also the ones they like to frequent. Fans of festivals and intimate venues may very well stumble upon the duo in such places.

“I’m not a big fan of special effects during a show… They’re not what I’m looking for,” stated Vézina.

This point of view on makeup and fireworks at a concert ties in with her view of today’s music industry. When asked what her thoughts on the current landscape were, she had this to say:

“They asked for it, in a way. Nothing surprising about any of it. ‘Video Killed the Radio Star’ got it right. I never thought videos helped music out, really. It made it about material, image. Still, we have to adapt. Musicians who play for the love of playing will still make good music.”

To that, Hayes added:

“If you try and make music that’ll please everyone, it loses its flavour and style. You end up with the musical equivalent of a chef’s salad with nothing but lettuce. Who wants that?”

According to the duo, there’s just as much good music out there… One simply has to dig it out for oneself and not solely rely on radio.

When on stage, Vézina and Hayes try to offer a variety of songs.

“It’s mostly covers, but I sometimes sneak an original composition or two in there, mostly old songs. I don’t have much time to write these days with all our projects.”

One of these projects is a band called Hall of Fame.

“The band’s been around since 2015 but we just recently named it. We started with parties like the St-Jean-Baptiste. It’s a cover band. We play rock, country… Sometimes we adapt pop songs and give them an edge,” said Vézina.

2018 promises to be an interesting year for the duo, which already has a few shows lined up.

“Music always has a place in my life. Happy… Sad… There’s always the perfect piece of music for the occasion. I can’t imagine life without my guitar,” said Vézina.