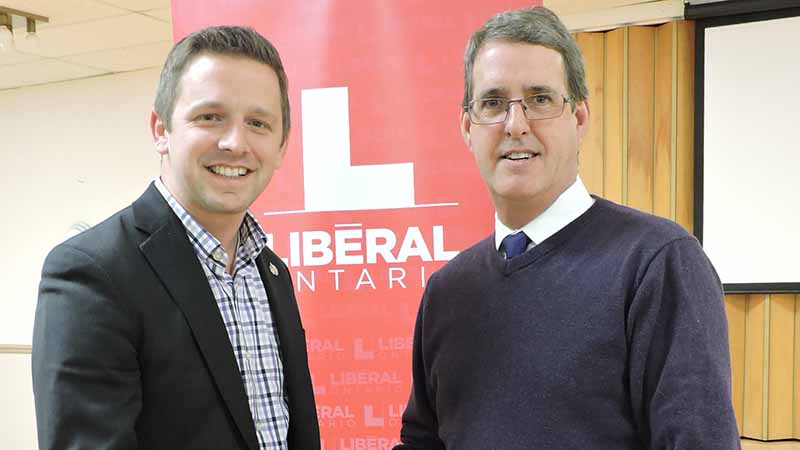 MP Francis Drouin and Liberal candidate for the next provincial election, MPP Grant Crack. (Photo credit : Annie Lafortune)
Grant Crack was nominated to run for re-election in Glengarry-Prescott-Russell at a January 28 gathering in Rockland.
“I am excited to be standing for reelection to continue serving our communities and to keep delivering positive local results,” said Crack. “It’s been an honour to work hard for our communities at Queen’s Park on Premier Kathleen Wynne’s team.”
Grant Crack was first elected to the Ontario legislature in 2011. He was re-elected in 2014. Crack currently serves as Parliamentary Assistant to the Minister of Agriculture, Food and Rural Affairs. He was previously Parliamentary Assistant to the Minister of Education.
Prior to his election, he served as mayor of Alexandria (North Glengarry) for eleven years. As former mayor of a diverse municipality, Crack says he understands the needs of an urban community, as well as the important role that the agricultural industry plays in Ontario’s economy. He says that under his leadership, North Glengarry council moved forward with various projects, including the Regional Water Supply Project for Maxville and Alexandria, the indoor sports complex  and the concrete skate park in Alexandria.
Crack has three children: Chloe, Calvin and Leah, and three grandchildren. He lives with his spouse, Kelly, in Alexandria.
‎