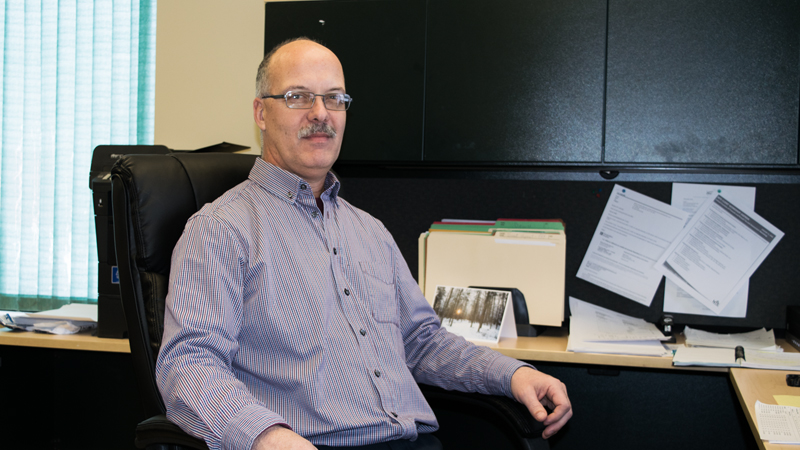 It’s been a little over 3 months since Luc Lalonde took office as the Township of East Hawkesbury’s new Chief Administrative Officer (CAO) and Clerk-Treasurer. As 2018 dawns, bringing the accounting system and all financials up to date remains a priority.

A Review article published in September 2017 stated that the previous system used by the municipality was decades old and used in combination with many manual book-keeping methods.

“One of the first challenges encountered back in September was the final municipal tax bills, which still weren’t ready,” says Lalonde. “Additional work updating accounts in the new system needed to be done before they could be sent out.”

Indeed, updating the accounting system has a widespread impact and should start bringing about tangible change early in 2018. “For our employees, it means a fully computerized payroll system with direct deposits,” states Lalonde. “For the residents of East Hawkesbury, it translates to an accurate daily portrait of the Township’s financial situation, which couldn’t be done before since we were always catching up. The council will now be better informed when making budget-related decisions because they’ll always know where we stand.”

“It also means that the information will always be readily accessible,” adds Mary McCuaig, former CAO of The Nation Municipality. McCuaig joined the team as a consultant and advisor to Lalonde when interim CAO/Clerk-Treasurer Robert Lefebvre’s three-month stint ended on Friday, September 15.

The construction of Chute-à-Blondeau’s new sewage treatment plant started in the summer of 2017. Lalonde, when asked about the project’s progress, replied that things were “on schedule and on budget”.

A study concerning St-Eugène’s communal septic system was also completed in 2017. The village currently possesses two disposal fields in its septic system, one of which was updated a few years ago. According to the study, St-Eugène’s second field is to be redone this very year. “We’re currently in the application process,” says Lalonde. “Since there are two fields, people who use this system won’t be bothered by service interruptions once the work starts.”

St-Eugène is not the only village in Prescott-Russell to use this type of system. According to McCuaig, both Fournier and St-Bernardin use communal septic systems. “One advantage of this system is its low day-to-day operation cost,” states Lalonde. McCuaig adds that “when residents have private wells, a communal septic system reduces the risk of water contamination.”

As for the 2018 budget and related investments, Lalonde errs on the side of caution. “Although it remains their decision, my recommendation to the council members was to steer clear of any new major investments for 2018, or until we get an up-to-date, clear picture of the township’s financial situation,” said Lalonde, adding that, “we’re not in trouble, we have no major debts and everything is secure, but I’d still like to have all the facts in hand before moving forward with new investments.”

“I’d love to have more information on the budget as early as possible, but realistically, since our accounting for 2017 isn’t yet finished, I’m aiming for May 2018,” says Lalonde, adding that, “it would still be an improvement over last year by several months.”

“Our main objective for the future is to have budgets ready before the start of a new year.”

To the residents of East Hawkesbury, Lalonde said: “I’ve always worked honestly. I plan to use all my knowledge and experience for the benefit of the township.”