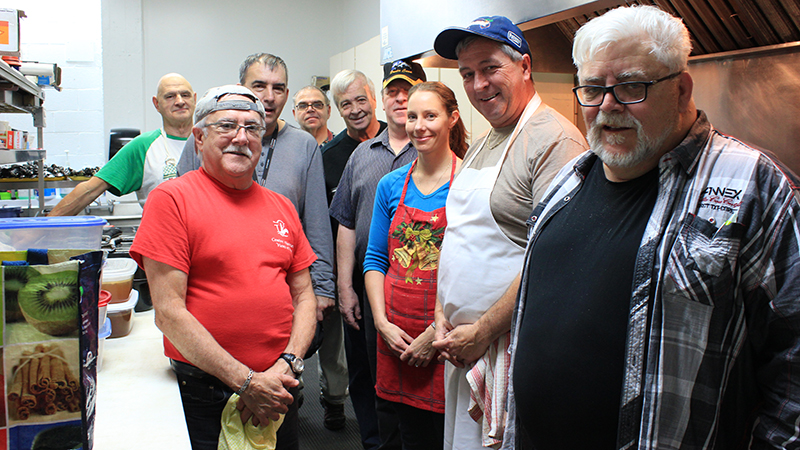 For Pastor James Yank, Christmas spirit is a year-long state of mind – and heart. As he leads the Viens et Vois congregation on an ongoing mission of helping others, it perhaps has more meaning for Pastor Yank, who knows what it is to live a live of hardship.

At age 31, he turned his own life around: dedicating his time and energy to helping those in need. For 18 years, he has led the congregation at the Viens et Vois evangelical church in Hawkesbury as it organizes activities to help people cope with poverty, substance abuse or simply, loneliness.

“Viens et Vois is an evangelical church and has been in existence for 35 years. We moved around a lot because the congregation keeps growing. We’ve been here, on Mary Street, in the old Ascension Church for the past 5 years now. We have people from Rigaud, Grenville, Alfred, Chute-à-Blondeau, Vankleek Hill and elsewhere that come and join us in prayer or participates in our events. Our meetings are held on Sundays at 10 a.m. and are are usually two hours long. We are really strong on gospel music, we usually have music for 45 minutes and then we speak about various themes,” said Yank.

It was when Yank was 31 that his life changed dramatically. He says he came from a very dysfunctional family; his father was an alcoholic and his mother was addicted to various types of medication.

“I have two sisters and two brothers and they all had long prison sentences in their lifetime. I was lucky enough to turn my life around before being caught. My first attempt to get away from family life was when I joined the Canadian Navy when I was 18.  I was one of the youngest promoted but because I had developed an alcohol problem, I was demoted. My problem with alcohol led me later to leave the Canadian Navy. When I arrived in Montreal, I joined an outlaw motorcycle club, the Devil Riders in St-Henri neighbourhood. I don’t like elaborating on those years because I prefer the present and what good is coming to me in the future. At the age of 31, I met my wife and turned to God for guidance. Through my relationship with my wife, I was able, for the first time in my life, to experience love. Her family accepted me for who I was and brought me into their lives. This changed me deeply,” said Yank.

After getting married, he started working as an investigator for insurance companies and worked with the Sûreté du Québec. He had worked with the same police officer a couple of times and at one point he wanted to come clean. He shared his secrets from his past life and told him to do whatever he wanted to with the information. I wanted to be at peace with myself. After confessing to the police officer what he had done without incriminating anyone else, the police officer told him not to worry and to move on with his life, which was now on a positive course.

“After talking to the police officer, I started hosting bible study groups in prison to help inmates cope with their crimes and sentences. After a few months, we built a certain trust with some of the inmates. I knew that some of these inmates had family histories like mine and that their biggest concern was the well-being of their families living outside the walls of the prison. So my wife and I started storing clothing items in our house and then inmates gave us the names of their spouses and we would bring them over to our house where they could choose clothes for themselves and their children. That’s when I realized what I wanted to do full-time: help people in need. That’s when we started to help the homeless in Montreal by donating food and clothes to them,” told Yank.

At the age of 33, events in his life led him to move to St-André d’Avellin and start his life as a pastor full-time. It was a specific Bible Verse, Matthew 25:43, that really led him to devote his time and energy to the most needy.

Today he leads the Viens et Vois Church where he built a program to serve the most needy all year round. Every Friday there have a soup kitchen where more than 120 free meals are served. All the food is purchased thanks to donations made to the church. On Wednesdays, there are bible study groups and Monday nights, the church hosts a 12-step program, not just for alcohol addiction but to assist those with all kinds of bad habits.

On Thursdays, the Alzheimer Society uses their rooms to bring Alzheimer patients there for a few hours to give a break to the at-home caregivers. Every second Wednesday, they offer cooking classes to clients from the Hawkesbury Central Food Bank to help them find ways to get the most out of their food baskets. Every third Wednesday, in partnership with the Eastern Ontario Health Unit (EOHU), they have green boxes for people to give food items or money for the needy.

“We also have a food bank called Le Bon Samaritain that I could say is in partnership with the Hawkesbury Central Food Bank since it’s only open for a limited amount of time. So when people need more help they can pass by us to supplement before they can go back to the Hawkesbury Food Bank. Ninety per cent of the people who come here are not part of the congregation and not all of them are in a vulnerable state. Some people participate in ur events because they feel lonely and they need to see people,” said Yank.

“Being poor with no money or food is tough, but when you have a loving family anything is possible. When you’re lonely, even though you are not struggling, everything may seem distant or unattainable, so people come here to spend a few hours in good company and replenish their souls. My mandate comes from God. This is my belief, but we never push our beliefs unto people. We fulfill our celestial mandate by giving back and doing unto others as we would like done unto us. What they believe, is up to them.”