Born to be wild across the globe 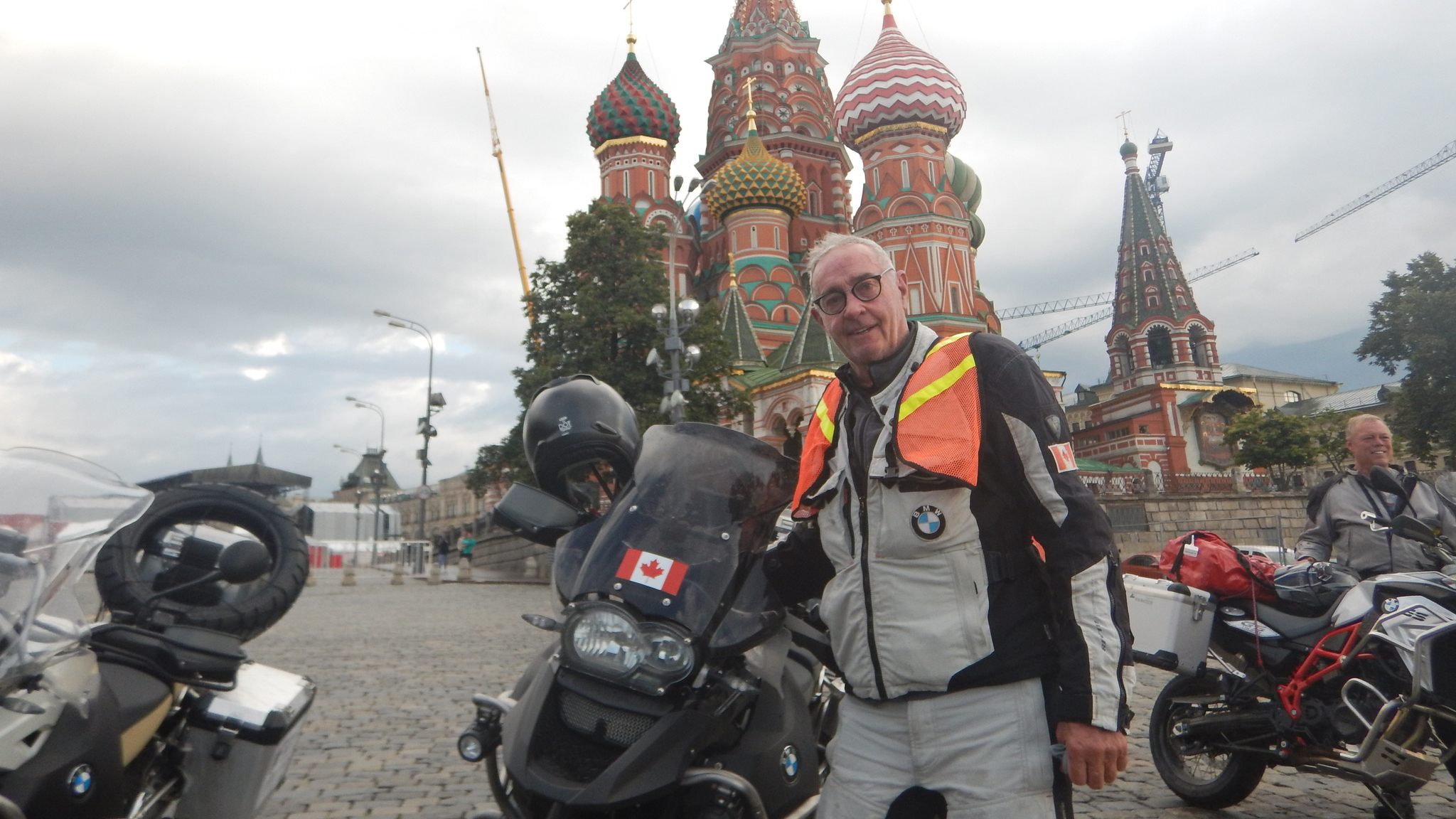 Gilles Robert in Moscow before taking the trans-siberian highway.

Gilles Robert, 71, used to own and operate food distribution businesses in the Hawkesbury area. He always had the urge to travel the world and have adrenaline-induced experiences. In early 2000, he started traveling the world and climbed the highest mountains in Tibet, Nepal, Kashmir, Argentina and Bolivia. But on one of his international mountain treks, he developed respiratory issues. These issues forced him to stop conquering the summits of mountains where oxygen is scarce.

But these respiratory issues did not stop him from pursuing his passion of traveling the world. After being told that he could no longer climb in high altitudes,  Robert decided to buy a BMW GS 1200 AVENTURE motorcycle as his workhorse and planned his first trip across the United States, Mexico, Central and South America. Robert has been riding a motorcycle since the age of 15. Before deciding to travel the world on his motorcycle, he enjoyed riding the trails near Kilmar Road on his motocross with his grandson.

“I’m not and never was the type to ride a motorcycle from Tim Hortons to Tim Hortons. I need a bit more of an adrenaline rush or at least get to see more scenery. I don’t always need to travel in foreign countries. Canada has amazing roads to ride and scenery to see. I might get to travel across Canada from Grenville-sur-la-Rouge all the way to B.C. soon. If I’m about to take the risk of riding a motorcycle, because there are always risks, even when riding in your own country, I might as well make every trip count,” said Robert.

After coming back from his first trip across the US and Central America, he decided to take on a more perilous adventure. He wanted to travel in the Amazon River area. So one year after his first international motorcycle trip, he sent his BMW GS 1200 AVENTURE to Lima in Peru to start his voyage. From there he traveled hundreds of kilometers through sand and mud because for most of his trip, there were no roads. At one point, he had to make a 5000-km detour because he couldn’t cross the border between Venezuela and Colombia. When he was near Jonestown in French Guyana, the infamous place where Jim Jones massacred hundreds of his followers, Robert fell off his bike and got stuck under the 700-pound motorcycle.

“I fell multiple times throughout my travels, but when I fell near Jonestown it really affected my morale. I was used to travelling at least 450 km each day. Because of the road conditions, I could hardly clear 125 kilometres a day, not being able to go over 30 km per hour. I grew really tired and weary. I rallied my courage to continue and push on. After the incident, I entered Brazil and the road that was supposed to take me out of the Amazon was gone and so was the bridge that crossed the Madeira River.  That year, the equivalent of 10 feet of water fell as precipitation, which caused the road to be flooded. So I had to get on a barge for four days on the river, traveling at 12 km per hour for 24 hours a day and we had 800 km to go. I was so bored I started mopping the floor and helped as much as I could to keep busy,” recalled Robert.

Robert had a few scares while traveling across South America, but they were mostly due to the traveling itself and not the people. He was always surprised by how much people welcomed him into their homes or simply gave him a hand when he needed it. The only thing he refused to do was to go out at night since most areas are poorly lit or not lit at all. He recalls many times throughout his travels the efforts of strangers to accommodate him.

“Canadians are welcomed with a red carpet. I put flags on my clothes and my motorcycle. In French Guyana, I had a hard time finding a hotel, and a man that worked at the spaceport invited me to stay over at his house for three days. That really changed my morale since I could get a good night’s sleep and could rest during the day as well. This was just one of the multiple times people helped me during my travels. I really enjoy riding my motorcycle and the exotic scenery, but the people you meet along the way is what makes it all worthwhile!” said Robert.

In the summer of 2016, Robert decided to follow the Trans-Siberian route. He contacted the Trans Siberian Tour company which was organizing the first-ever motorcycle run from west to east across the immense Russian landscape. He took several months to learn Russian from his good friend Zhanna Kitik, who now resides in L’Orignal but is formerly from Russia. His trip began in Munich, Germany and crossed Europe, stopping to tour cities until he hit Moscow. After visiting the capital, he started his journey on the road with the company. The Russians taking care of the trip got Robert a working visa in exchange for his translation services with the other tourists joining the trek.

“Growing up, I was told Russia was just a barren land, which is totally false. It’s just like Canada, huge farms with combines. At one point, I stopped to take pictures of 24 combines working in immense fields. Lots of wheat, soybeans and dairy farms.  The first restaurant out of the airport in St-Petersburg is a McDonalds and there is a Starbucks. It’s a rich country and clean; it’s nice to be proven wrong,” said Robert.

According to Robert, the road resembled Highway 17. The road had only one lane on each side and was mostly used by trucks transporting goods. They saw very few cars since people usually use the Trans-Siberian train to travel. He managed to stop multiple times along the way and chat with the locals and, of course, drank vodka. He was impressed by how developed the cities were in such remote areas. The landscape, he says, is similar to the Laurentides. At the end of his trip, he regretted not getting a Chinese visa in order to enter China when he was in the far east side of Russia. He says that trip will be saved for some other time.

“The guide asked me if I was finding the road tough to travel. With all I went through in the Amazon, this was a walk in the park. A very nice park, mind you. Right now, I am planning my next trip. Probably in Australia, although I would go back to east Asia even though I technically went on my Russia trip, because there is just so much more to see. But I also want to travel across Africa as well. I will let you know of my next trip as soon as I make up my mind!” concluded Robert.