Keeping the art of knitting alive 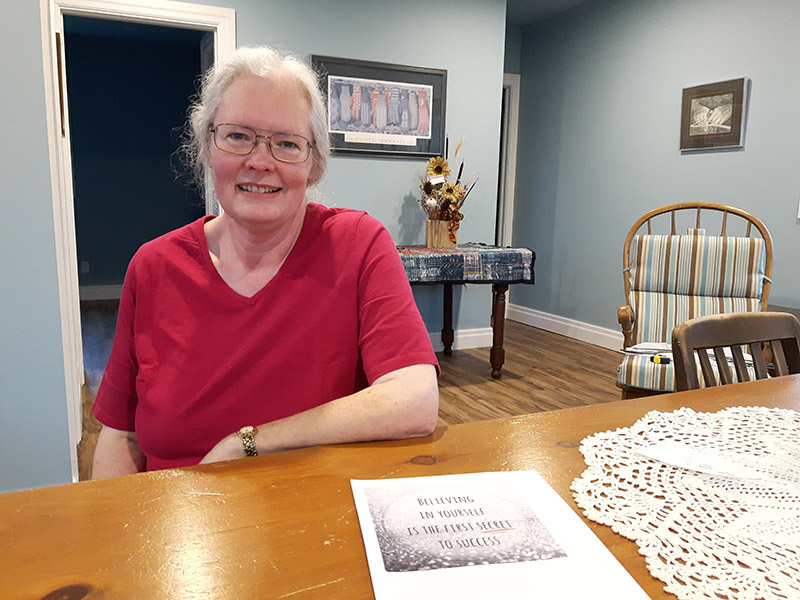 Vankleek Hill’s newest venture is about keeping old skills alive. For knit and crochet enthusiast Stephanie Anderson, opening Yarnworks Studio at 22 Farmers Avenue in Vankleek Hill is a big step towards what she has been wanting to do for some time now. But it is also a big step outside of her comfort zone, says the shy, softspoken woman. Yet her shyness is offset by her firm resolve and knowing exactly what she wants.
“I have been thinking about this for a while and it really is a big step to put it out there and be public about it. It’s really happening,” she smiled.
While Anderson has been meeting with other knitters regularly and is an integral part of the Champlain Library knitting group, she wanted to do more.

The idea of her studio is to create a place for like-minded people to get together and share ideas and knowledge. Although Anderson herself is an adroit knitter, she says there is always more to learn.
The cozy studio has a work table ready for those who want to take advantage of the studio’s drop-in hours, which are  Tuesdays, Thursdays and Fridays from 10 a.m. to 3 p.m.
Another room contains a small library of resource books related to all things knitting and needlework. She has yarn organized and says she is ready to help beginners.
An avid knitter and crocheter for about 50 years, her interests also extend to weaving, embroidery and more.
Anderson will be setting up her loom in the small house on Farmers Avenue; the farm wife and mother of one son says the loom has sat idle in the basement at their home for more than 10 years.
But knitting and crocheting are definitely her “go-to’s”, she says.
Anderson is originally from Newfoundland and studied arts and crafts at the Nova Scotia College of Arts and Design. Her studies included art history and textile design. And she has done some teaching, too, so it is only natural that she is planning to offer classes beginning in January along with some workshops, too, she adds.
She has books with knit and crochet samples and as she goes through the samples and instructions, it is clear that she knows exactly how to get beginners off on the right foot.
Like most dedicated knitters, Anderson says she always has a “portable” project ready to take with her when travelling or at an event where she feels comfortable taking out her knitting.
How she purchased a home on Farmers Avenue
Anderson had been eyeing locations for a few years when long-time Vankleek Hill accountant Bob Lewis mentioned to her that he was nearing retirement. For years, Lewis operated his business out of a small house at 22 Farmers Avenue. Lewis had purchased the home from Vankleek Hill artist Freda Pemberton Smith a few decades ago.
“We had been to see Bob and he told us about his pending retirement. When we got home, I called to ask if he was going to sell and he said to come right up and see the place,” Anderson recalled.
The deal was seamless and the timing could not have been better.
Anderson says that the building had been well-maintained by Lewis, and noted that one could still see the pegboard on the wall behind the gyproc in some places. (Most of the home’s interior had been covered in pegboard because Pemberton Smith had her paintings hanging everywhere.)
Anderson says she feels it is fitting that the space will once again be given over to creative pursuits.
If you are interested in finding out more about drop-in hours, or classes in January, call 613-678-1681.