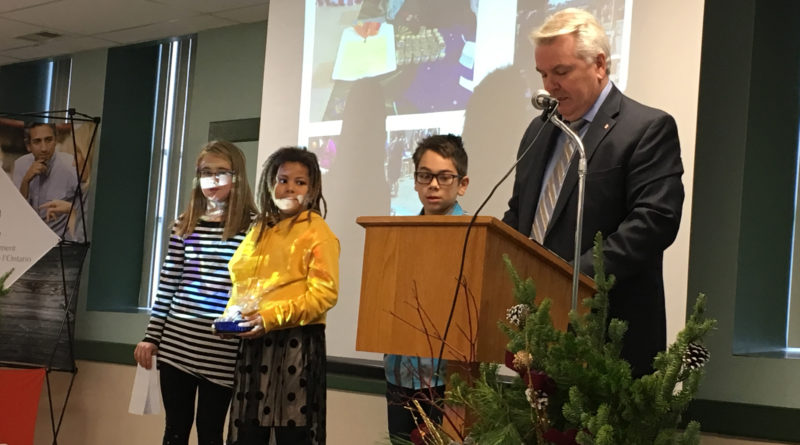 Entrepreneurs from all over Prescott-Russell were present at a breakfast held at the University of Guelph Alfred campus on the morning of November 13 to officially launch the Global Entrepreneurship Week (GEW) in the area.

The week will be full of activities and workshops and will also support local student in their entrepreneurship initiatives. The Conseil scolaire de district catholique de l’Est ontarien (CSDCEO) is heavily involved in the project and has multiple events being held in schools across the region . On November 14, it held its Journée des petits entrepreneurs where young students showcased their business projects.

John Candie, director general at the Prescott-Russell Community Development Corporation (PRCDC), presided over the event. MPP Grant Crack and MP Francis Drouin also attended the launch along with Alfred-Plantagenet Mayor Fernand Dicaire who had a message for both young and older entrepreneurs. He told them to believe in their hometowns and urged them to stay and build a business here so they can also build families.

“We had two schools close down in my municipality and I don’t want one more to go. Stay here and build here,” said Dicaire.

The recurring theme throughout the presentations was the dire need and necessity of having more businesses in Prescott-Russell to drive up the economy and create jobs. Éric Drouin, chair of the PRCDC and entrepreneur, acknowledged that being in business is much harder than having a day job and that entrepreneurs may feel like everybody else is making money off their business. But his message was to persevere and face the odds that might seem unfair because he says the day he could make a living off his business is a day he’ll always remember.

The GEW was announced in 2007 by Jonathan Ortmans, president of GEW, Carl Schramm, former president and CEO of the Kauffman Foundation and Gordon Brown, former prime minister of the United Kingdom. It began with 37 countries in 2007 and grew to 165 countries participating in 2016.