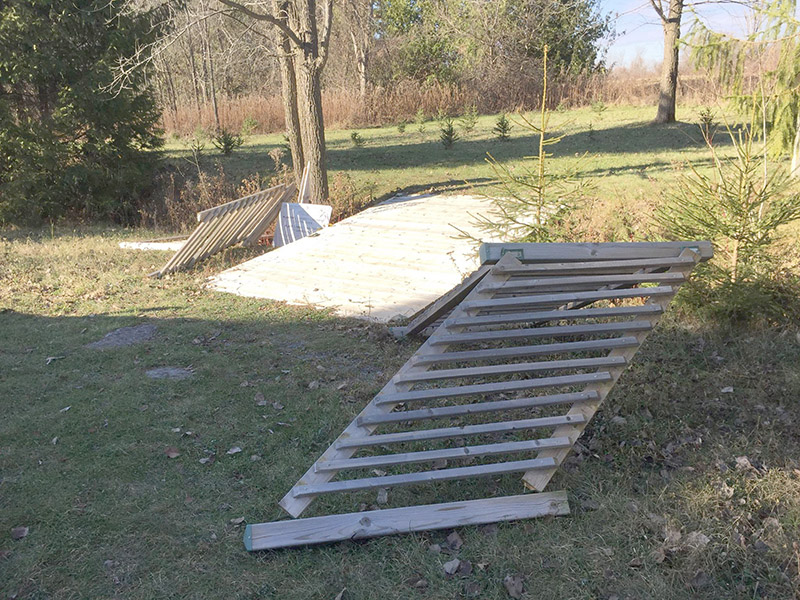 Damage to a small bridge leading to a park-like space along the Prescott-Russell Recreational Trail has Mark and Lisa Henderson perplexed. The couple owns Vankleek Hill’s Hillcrest Funeral Home and for the past few years, Trees of Remembrance have been added alongside the trail, along with a bench, to create a quiet space in which people can remember loved ones – the trees have been planted there by the funeral home in memory of deceased loved ones.
A small footbridge enables people to access the space from the trail.
“That bridge was really well-built. Whoever did this worked really hard. It was built with metal plates, so it took someone considerable effort to do this,” said Lisa Henderson.
A post on the funeral home’s social media page asked people to stay positive, Henderson says, because she felt it was more important for people to share what the Trees of Remembrance mean to them.
“I didn’t want everyone to jump on the bandwagon and be negative about this,” Henderson said.
During a short interview, Henderson had said that the bridge would be rebuilt in the spring. But she called back later to say that Keith Allen and his son, Billy Allen, who owns Rustic Rentals, had visited the site and that the bridge had been repaired.
“This is an amazing community,” said Henderson. If anyone should know about community, it is Henderson and her husband, Mark.
Hillcrest Funeral Home is currently wrapping up its year-long 50th anniversary celebrations, which included 50 Acts of Kindness (one per week) throughout this past year.