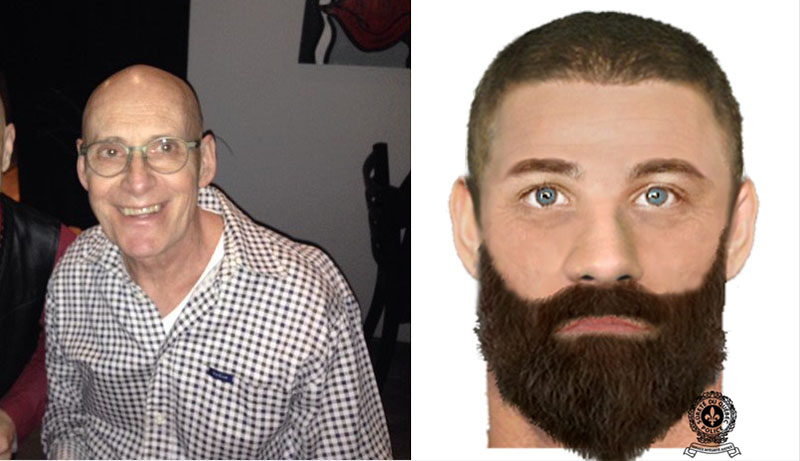 Police concluded their search for 71-year-old Yvon Lacasse (left) after his body was was found in Arundel on Wednesday evening. Lacasse’s vehicle was stolen by the suspect in a Quebec amber alert case. Right, a reconstruction of an unknown man seen with the suspect on Thursday night, who has not yet come forward. (Photos: La Sûreté du Québec)

On September 20 at about 5:30 p.m., Sûreté du Québec officers found a body in Arundel, Que., which they believe to be 71-year-old Yvon Lacasse.

Marc Tessier, spokesperson for the SQ, is quoted as saying that “every indication” points to it being Mr. Lacasse, but that they still need the coroner’s confirmation.

Lacasse’s vehicle was stolen during an amber alert and has been missing since September 14. Police focused on Arundel after surveillance footage showed Lacasse’s Honda CR-V in town. The CBC reports tips from the public led the officers to search around Chemin de la Rouge and Highway 327.

The amber alert began last Thursday night, after Véronique Barbe was found dead in her home in Saint-Eustache and her six-year-old boy was reported missing. Police considered Barbe’s partner, Ugo Fredette, the prime suspect in both cases, at that time.

The alert lasted until Friday, when the missing boy was found with Fredette in Dacre, Ontario. Police placed Fredette under arrest, while the boy was transported back to Quebec, under the care of provincial youth protection services.

SQ officers are still looking for a second witness connected to the case who was seen with Fredette on Thursday in Rouyn-Noranda.