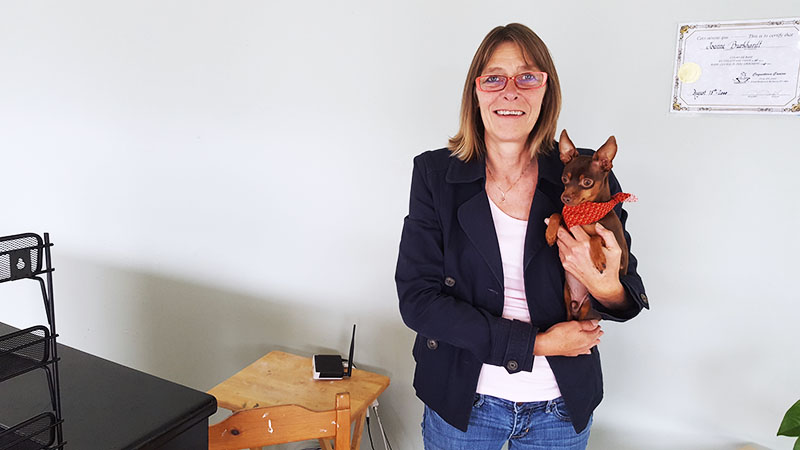 Joanne Burkhardt opened Bark Hill Pet Sitting in early September. With more than 17 years of pet-care experience, Burkhardt is looking to bring a novel service to the community with her pet-sitting business. Here she is pictured with her own dog, Mowgli. (Photo: Clark McGillis)

A man’s home is his castle. And dogs are man’s best friends. So, where better to let your best friend stay than your castle?
Taking care of pets when owners are away is just one of the services offered by Vankleek Hill’s newest business: Bark Hill Pet Services & Grooming.

Owner Joanne Burkhardt opened Bark Hill Pet Services & Grooming at 5580 Highway 34, earlier this month in Vankleek Hill. As its name suggests, the company provides all kinds of services for people’s pets but also offers help for people who have to spend time away from home and can’t take their animals with them—whether for vacation, or when they visit friends and family, or just during regular workweek hours, as in the case of commuters who are away in the city all day and are not home during the day to let their pets out for a run.

Rather than taking the pets out of their homes, Burkhardt comes to them, allowing the animals to remain in the comfort of a familiar environment. For Burkhardt, this method is a direct extension of her own philosophy towards how pets should be treated.

“The thinking is pretty simple: we believe that pets are family and so we treat them as such.”

Burkhardt says she decided to start the company after talking to pet owners in the area, who expressed the need for a service that could provide animal care at home, along with many other suggestions for pet-related services. Given the number of households with pets in the area, Burkhardt says the idea was a “no-brainer” for her.

“There are some groomers around but everyone I talked to said we were missing a pet-sitting and daycare service” she says. “It was something I thought I could add to the community, so I said, ‘Let’s do it!’”.

Burkhardt even goes so far as to offer transportion support for the elderly, assisting them to get their pets to appointments.

But pet-sitting is just one focus. Bark Hill also offers the full gamut of other pet-care services including grooming, daycare, and obedience training. Her grooming table is fully electric and almost completely silent. She also has non-slip mats in her tubs to ensure maximum comfort for the pets—and for herself.

Despite the canine-centric name, the company handles more than just dogs—cats, hamsters, and even farm animals, like chickens and horses, are well within Burkhardt’s purview.

“I can handle pretty much anything,” she says with a chuckle.

A lifetime of animal-care

Burkhardt has been in pet-care services of one kind or another for a long time—over 30 years, in total and has been a certified pet groomer for more than 17 years.

Burkhardt has taken multiple courses in animal science. She’s also operated a long-running kennel service out of her own home, which doubled as a small hobby farm at the same time.

With her new pet-care service, Burkhardt hopes to continue to expand her animal hospitality horizons even further.

“It’s a new thing I’m doing here, but I’m excited. I really think [Bark Hill] can add something to the community.”

For the uninitiated, pet-sitting is exactly what it sounds like—it’s baby-sitting, only furrier. The concept is a shift away from the kennel model, which usually involves keeping animals in cages among groups of other animals they don’t know, in unfamiliar settings.

By taking care of the pets in their own homes, Burkhardt says she is able to minimize the stress imposed on the animals. As she explains, “My goal is to keep the pets as happy as possible. Anything that makes it easier for them, I’ll make it happen.”

Once she has coordinated a schedule with the pet owner, Burkhardt will usually visit the house two to three times a day. Mostly, these visits involve taking the animals for walks, making sure they’re fed, and just checking up on how the animal is doing at the time. Burkhardt says she always tries her best to maintain the pet’s regular routine.

In the future, Burkhardt, who currently runs Bark Hill by herself, says she’d like to add employees to her staff so she can broaden her availability. She’s also looking into taking on co-op students from Vankleek Hill Collegiate Institute (VCI) eventually, particularly those considering a future in animal-care of one kind or another.

Burkhardt would like to add to the facilities at her “headquarters” along Highway 34. She plans to add pens inside to separate dogs of different sizes and also hopes to build an outdoor area so the animals can go out and exercise—weather permitting.

Burkhardt, who has been away from the area for a few years, says that she wants her business to be community-focused. Artist Brunhild Schierding has her art on display at Bark Hill’s location and Burkhardt says she is looking for artisans or those who make pet-related items to offer their products for sale at her location.  She invites people to contact her if they create pet-related items they would like to sell.

She has a photographer lined up to do pet photography at her location and says that pet owners can book an appointment for their pets with a local certified animal chiropractor offering services at Bark Hill Pet Services & Grooming.

In recent weeks, a new market need presented itself to Burkhardt when out-of-towners landed at local events with their dogs, and then were turned away at the gate.

“Luckily for them, someone standing nearby overheard and recommended they contact me to take their pets while they attended the event,” Burkhardt said. Although it was a last-minute booking, it all worked out, she says.

Burkhardt is currently accepting registrations for obedience training courses to begin on September 28.