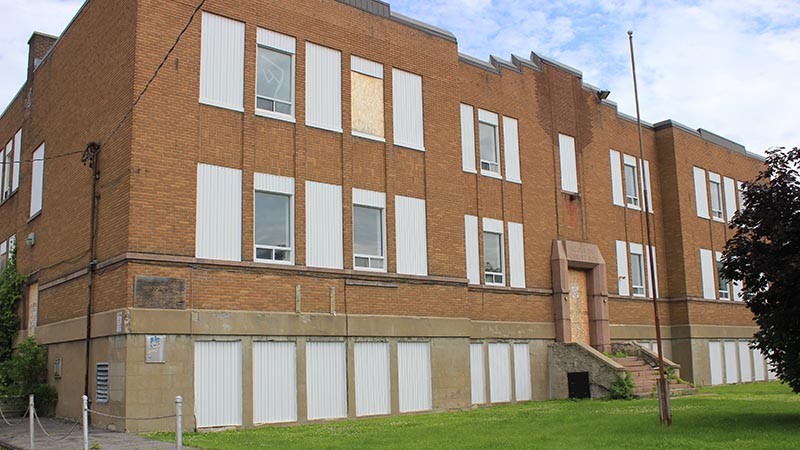 Developer Anthony Assaly thinks the Town of Hawkesbury is ignoring an opportunity. An further, he says the town is exposing itself by undertaking a clean-up.

Anthony Assaly, CEO of ASCO Construction, doesn’t understand the thought process behind Hawkesbury council’s decision to finance the demolition of the Christ-Roi. He says that the decision will cost the town hundreds of thousands of dollars and he believes that Hawkesbury will not be able to have a return on investment since it’s already selling land for less than market value.

On multiple occasions during the past few years, ASCO has made offers to buy Christ-Roi, and offered to for pay for studies required before building a proposed waterfront condo complex.

“We wouldn’t have made money in the first phase of the project, obviously, because of the studies that needed to be done and the major decontamination work. Also, we learned that the Christ-Roi had asbestos and other contaminants which will need to be dumped in specific landfills that can accommodate such substances.”

“I believed that, in the end, the project was a viable one for us, but the last tender put out by council had ridiculously unrealistic expectations, even for major developers.”

The last tender required the purchaser to pay $1 plus HST and spend $10,000 on the development of the strip of property along the river that would remain town property. It would then become the town’s responsibility to develop that strip of property at its discretion and at its convenience.

Once the deal had closed, the purchaser would have six months to demolish and decontaminate in accordance with all applicable environmental laws. The purchaser then had six more months, until 12 months after the closing date, to commence construction of the first (main) building. The town mentions that it reserves the right to alter this time period through negotiation with the successful purchaser, but would not remove it altogether.

The town’s tender also required a $50,000 deposit, which is a regular occurrence in such tenders. Clause 7 of schedule “e” states that in the event that the purchaser cannot fulfill the tender’s requests in the agreed upon time frame, the owner would be forced to sell the property back to the town which would not reimburse any of the proposed price or the purchasers expenses, such as the demolition and study fees.

In other words, if a developer would not be able to start building a main structure within the 12 months after closing the deal, the town could force the purchaser to sell the property back to the town for $1, meaning all costs incurred by a developer would be lost.

Mayor Jeanne Charlebois says that the tender was very strict because they were tired of the back and forth with this project. The Christ-Roi and the Hawkesbury Mosque are not only an eyesore but also a danger to the public and they need to be brought down swiftly.

“We had no offer on the last tender and we need these two buildings to come down. Council decided that the town would open a tender for the demolition only, for now. After the demolition is done, we will see what we will want to do with the land,” said the Mayor.

“I can’t, as of now, pronounce myself on the future of these two properties. It could actually fall upon the next town council after the election to decide on what will be done. Right now, our priority is the destruction and clean up of both sites.”

When asked about the cost of demolition, Mayor Charlebois said that she can’t give an exact figure until companies bid on the tender which will be out soon.

Anthony Assaly is bewildered that the town had the opportunity to not only get condos built right on Main street but that it will use taxpayer money for a project that might have many more costly surprises.

“The Hawkesbury Mosque once housed a dry cleaning business, so who knows what kind of contaminants could be found in the ground. We were ready to buy the Christ-Roi and take all these risks because we knew that at one point we would get a return on investment.“