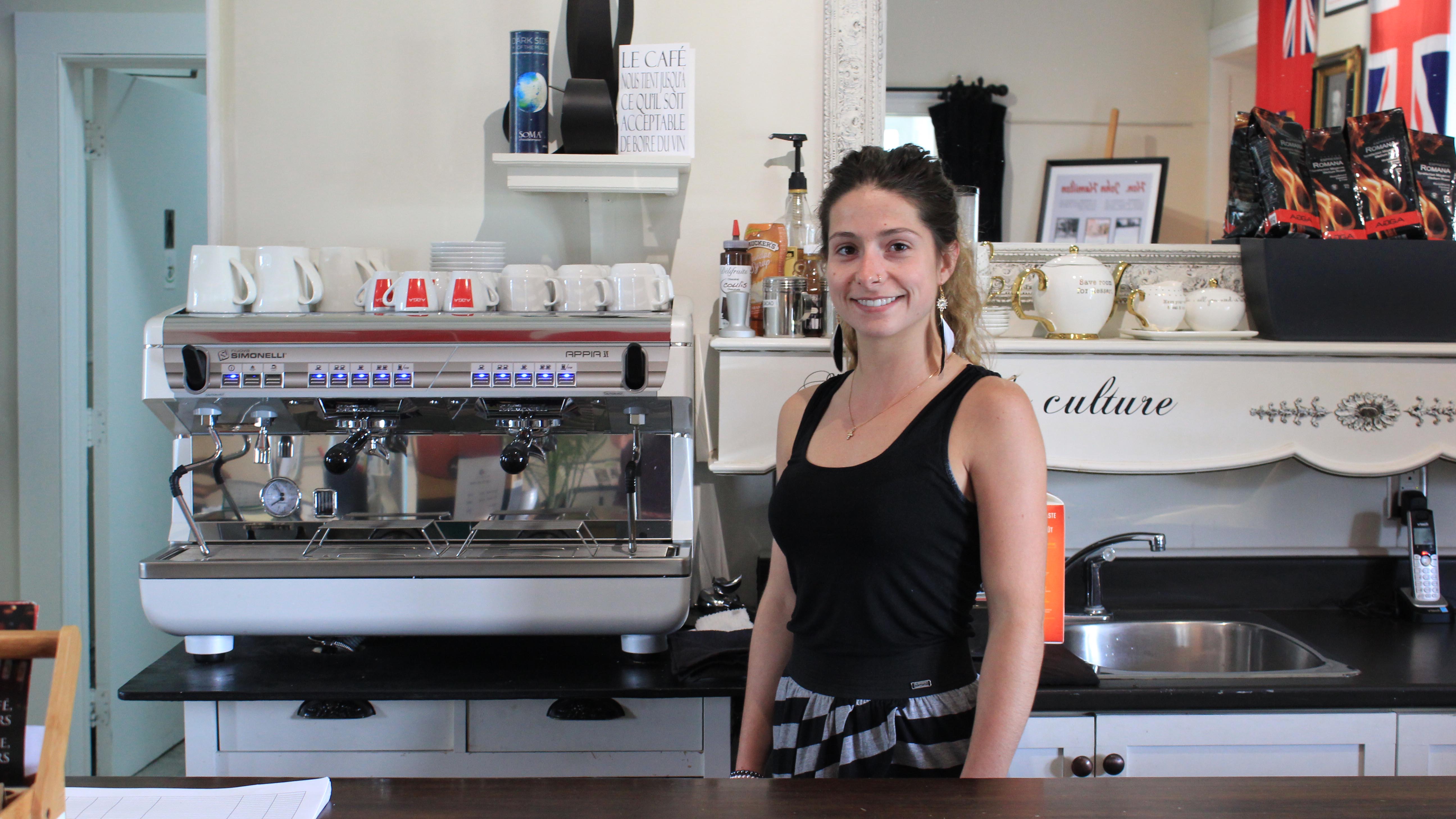 Danika Campbell will be serving gourmet coffees to the people attending the multiple events being held at the Maison de l’Île throughout the Summer.

Lynda Clouette-MacKay, the Chenail director, will have to proceed with the recently approved renovations between exhibits and shows throughout the fall and winter months.

The deadline, given by the Ontario Trillium Foundation, was pushed from March 2017 to March 2018 because of the eviction notice given by the Town of Hawkesbury last year and the confusion surrounding a resolution.

The Chenail took up residence at the Maison de l’Île back in 2012 and has faced many challenges since then, mainly surrounding its relationship with the town.

To the surprise of Lynda Clouette-MacKay, the town council voted, on June 12 of this year, in favour of allowing the Chenail to proceed with the much-needed renovation.

These renovations include the opening of a wall that will enable the Chenail to fit more people in front of the stage for events. The original floor will be covered by a similar flooring to keep the look.

The administration wanted to keep the original flooring, but the engineers could not permit it due to safety issues. Le Chenail will also close off the back terrace to create a space to store the food and beverages along with a commercial dishwasher.

“They [members of the town council] came to look around and were told, in person, what we wanted to do. We explained to them that the wall was not to be removed, but opened up so that we can fit more people in front of a stage. The door had already been relocated multiple times on that wall anyway.” said Clouette-MacKay.

“So  we didn’t know what the decision was going to be but we are very happy that we came to an understanding even though we are now a year late in the renovations.”

The Chenail, after receiving an eviction notice from the town back in April 2016, didn’t know if it would be able to spend the grants awarded by the Ontario Trillium Foundation.

The notice of eviction was received two days before the organized press conference by Clouette-MacKay announcing the renovations. The notice was given because the town wanted to take over the space and create an information centre.

The Chenail won in court against the town and were spared eviction. The town’s information centre is now in a small structure at the end of the parking lot. After the eviction debacle, the Chenail had to glove up again to fight the town on the interpretation of a resolution adopted in November 2015.

At the council meeting of January 16 2017, a heated exchange occurred between Councillor Johanne Portelance and the Chenail President, Paula Assaly.

According to Portelance, the resolution only permitted the Chenail to go ahead with the grant submission to the Trillium Foundation for the renovations but was not intended to approve these renovations. Paula Assaly saw this as an attempt to undermine the Chenail Cultural Centre’s efforts to improve its services.

Now that this is all behind them, The Chenail will go forward with the renovations and its cultural programming. In 2015, the Chenail managed to receive a $ 52,000 grant for stonework on the outside of the building from the first round of giveaways in the Canada 150 program.

That amount covered 40 % of the cost and the Town of Hawkesbury had to cover the rest. The Chenail is still waiting for the work to be done by the town.

“There are cracks between the stones and some water was able to infiltrate the inner walls. We are still waiting for the town to start working on this. It’s becoming more urgent now and we’ve been waiting for two years for the work to start.” said Clouette-MacKay.

According to Guillaume Boudrias, the town’s civil engineer, the work on the Maison de l’Île’s stone walls should start near the end of this summer and the beginning of Fall.

On June 17, The Chenail held their White Garden Party event that raised more than $ 28,000 with the help from the Scotia Bank who matched the sales of tickets.

The Chenail also received $12,500 more from Harden Group and an additional $ 5000 from Caisse Desjardins for their cultural programs. Over 170 people attended the event, including artists and volunteers.