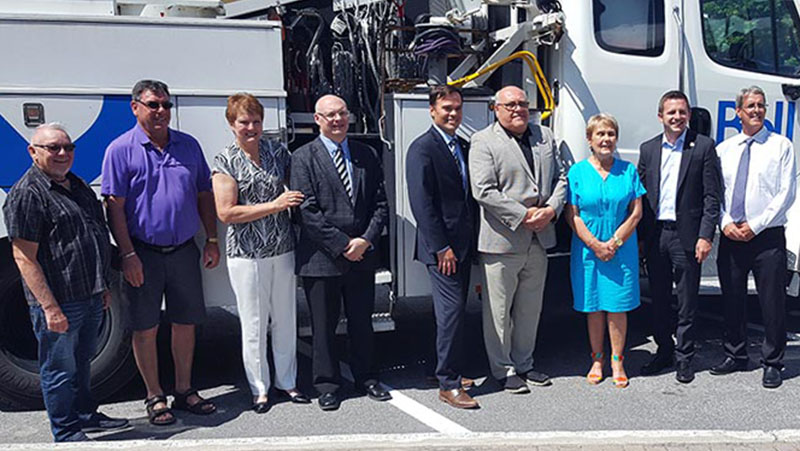 Hawkesbury and Grenville will soon be joining life in the internet fast lane.

On July 4, Bell Canada announced it will invest nearly $20 million to install 500 kilometers of broadband fibre-optics to households and businesses in the Hawkesbury and Grenville areas.

Installation will begin later this year, with the first activations to take place in 2018. Bell will fund the entirety of the project.

The announcement took place during a press conference held at the Hawkesbury Town Hall.

“Hawkesbury has entered the 21st century,” says Jeanne Charlebois, mayor of the city of Hawkesbury.

The project promises to provide internet users greatly increased download speeds—up to 1 gigabit per second (gbps). That’s about 100 times faster than current internet services in the area, which clock in at around 10 megabits per second (mbps), on average.

To put that into perspective, this means that a file that takes 10 minutes to download with current internet services, would take only a few seconds using Bell’s fibre network.

Hawkesbury Chamber of Commerce president, Antonio Tsouranakis says concerns about slow internet speeds are some of the most common complaints he receives from residents.

According to a report by the Canadian Internet Registration Services Authority (CIRA) in April of 2016, internet speeds in Canada average about 18.6 mbps. This puts Hawkesbury’s current speeds at nearly half that of the national average.

Charles Gosselin, director of municipal relations and partnerships for Bell, says that nearly 90% of households and businesses in the Hawkesbury and Grenville areas will have access to the Bell Fibre network. He went on to say that the fibre-optic infrastructure would be able to handle even greater speeds in the future—up to 10 or even 40 gbps.

Bell spokesperson, Marie-Ève Francoeur, says that the region was chosen to receive the funding for various factors including the density of the population, the local economic vitality, and the Bell infrastructure already in place. At this point, there are no plans to install similar services anywhere else in the region.

Bell expects to complete the project by the fall of 2019.