New and improved: Ouimet Farms Adventure to open on July 27 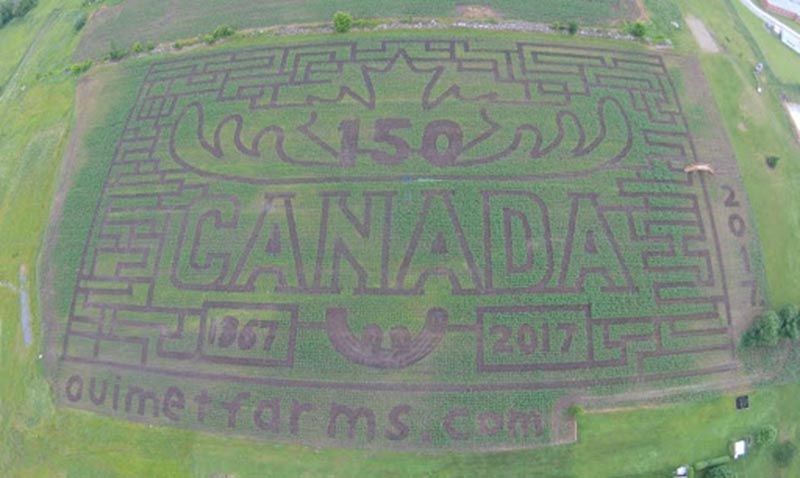 Walking down the drive to Ouimet Farms, it’s easy to see how it became such a popular site. First to catch the eye is their brightly painted PopSilo, part of an ongoing project to bring graphic murals to agricultural communities. Ouimet Farms’ silo was painted under the theme “Youth,” and the mural depicts a child in overalls, holding a pitchfork and staring dreamily into the distance with his eyes shaded by a jaunty baseball cap. This summer, “Farm Boy” will be overlooking a veritable fairground: in addition to the annual corn maze, the farm will host a variety of other summer activities.

Despite this year’s loaded summer schedule, there’s no question which one will be the favourite. “It’s our fifth year operating the maze,” said André Ouimet. “It was a slow start the first couple of years, but then we made a deal with a company to make their logo in the field. Things picked up after that.” Since then, the corn maze has been a well-known and well-liked part of the community’s activities. Ouimet is the owner of Ouimet Farms Adventure – though upon asking, he has a much broader role than the title implies. “Owner, creator, architect – I do a little of everything,” he said with a laugh.

This year, Ouimet was willing to share the difficult and involved process of creating the maze. “We actually draw it on a grid,” he said. “It’s a graphic design on a grid, and then we just get into the field and recreate it on that huge blank canvas – the corn. We carve it when the corn is about six inches tall, so it’s really a matter of counting the rows and laying it out. We mark it with flags, and then we just go in with a tractor and a little tiller in the back.” But it’s not all elbow grease: “There’s a lot of math and calculation,” said Ouimet, “especially when you start doing curves. And if you make a mistake at the beginning, everything else is wrong when you try to calculate it. We really have to work our way out from one end to the other.”

In point of fact, Ouimet does most of the work himself – and usually, it takes him between 30 and 40 hours. “I’m more patient with that sort of thing,” he professed. “And I guess I’m getting better at it – this year, it only took 20 hours. It’s a lot of fun to do.”

To celebrate Canada’s 150th anniversary, this year’s maze is a graphic tribute to the event. The design is “basically a moose head – the nostrils and antlers – with the Canada 150 logo.”

This year’s maze will be accompanied by activities both old and new, as Ouimet Farms Adventure builds its portfolio of diversions for the whole family. The large yellow jumping pillow is already waiting beside the barn; the zip-line system has been added to; and, for the first time this year, visitors will be able to try their hand at gemstone mining. Also, on the grounds at the front of the farm, there will be a farmers’ market open at the same time as the maze.

What’s more, this summer the barn at Ouimet Farms will be home to a learning centre and display area for visitors to learn about the realities of modern agriculture. Besides giving general information on subjects such as bee-keeping and dairy farming, the centre will also address some controversial topics. According to Ouimet, their goal is “to teach people about farming in our day and age. There’s a lot of bad publicity around farming if you’re just reading on the Internet, but the reality isn’t as bad as it sounds.” One such topic, said Ouimet, is the use of genetically modified plants. “There’s a lot of controversy [about GMOs,] but really it all boils down to making it simpler for farmers to grow their crops. You’re almost better off with a GMO, corn for example, because when you have corn that isn’t genetically modified you have to use all these pesticides, all these mixtures that aren’t necessarily good for you.”

The corn maze and farmers’ market will be open Thursday through Sunday, from July 27 to October 29. For more information on Ouimet Farms Adventure, visit ouimetfarms.com.