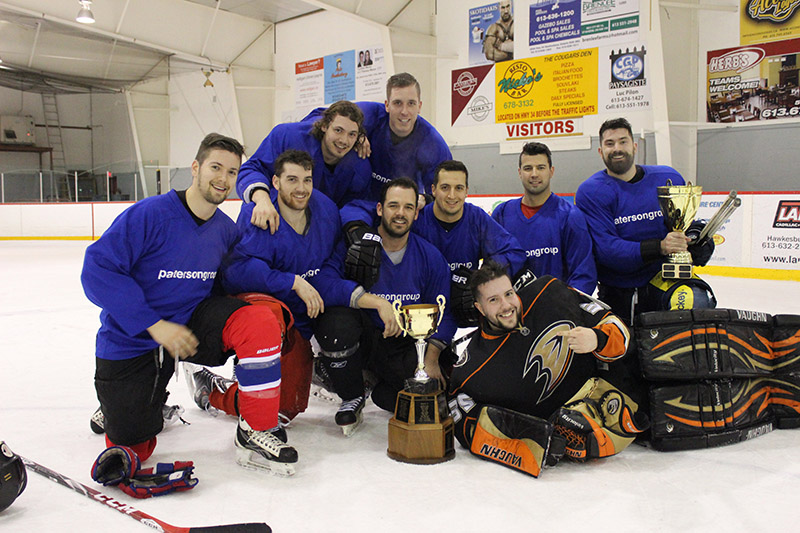 For the 13th year in a row, the end of March will belong to the Pond Rocket Cup 4-on-4 Hockey Tournament in Vankleek Hill.  The tournament takes place March 31 and April 1 and hockey players and fans flock from near and far to the Hill for a weekend of hockey, partying and a pretty darn good time, according to organizers.
This year King’s Lock Craft Distillery signed on to replace Herb’s as the title sponsor for the event.
For fans who have never seen a Pond Rocket game, you are invited to attend.  The action is nonstop, the skill level is high, and goals are scored in bunches.  Games are only 30 minutes long, which does not seem like much, but ask players and they will tell you it is like an eternity.
The action gets underway on Friday night with 14 teams playing in two divisions.  Play resumes on Saturday morning and the Championship game is scheduled for 8:45 pm.
While the action on the ice is great, the party surrounding the weekend is nothing short of epic. This year, Champlain Township will be presenting live entertainment on Friday and Saturday night upstairs in the newly-renovated hall.  Hadrian’s Wall front man, Neil Emberg will be entertaining the crowd upstairs on Friday night and The Gilles Arsenault Band will be headlining the Pond Rocket Afterparty on Saturday evening.
The Vankleek Hill Soccer Club volunteers will be working the door. Weekend passes cost $10.
Read organizer Jason Jackson’s inside scoop on the teams, the players and some “Where Are They Now?” clips in the March 29 edition of The Review, which will include the annual Pond Rocket Review!