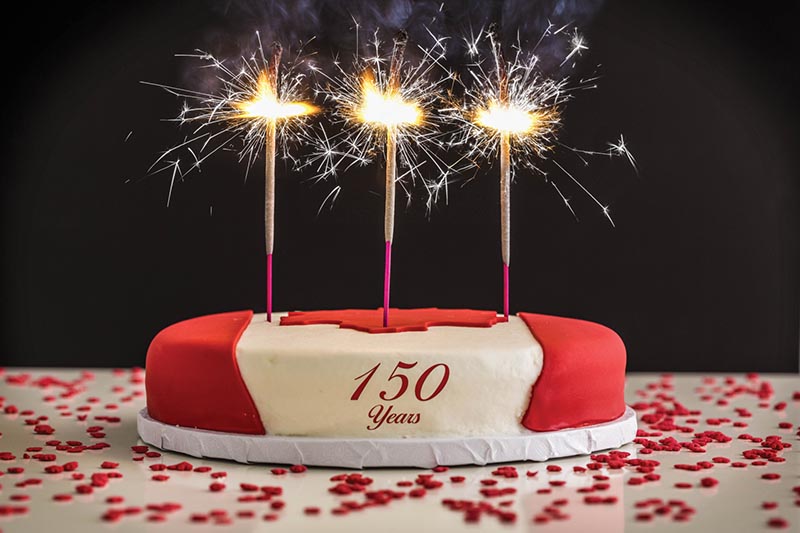 2017 marks Canada’s 150th year of Confederation. (Let’s for the moment skip the fact that Canada is really not a Confederation, but rather a Federation. Minor detail! Let’s blame that one on Sir John A. Let’s just say he had one too many that day.)
Is this 150th something to celebrate? You bet it is.
While we have, over the years, all had so many reasons, divisions, strife and entanglements and differences – over so many issues – to simply throw in the towel and see this country torn apart into so many fiefdoms of one sort or another, or simply sucked up by Uncle Sam, we’ve stuck it out.
A few examples. Less than 20 years after the British ousted the Régime Français, and La Nouvelle France came to an end with the 1760 Battle of the Plains of Abraham [one shot fired, one dead], the Yanks-to-be came to see if Québec’s Habitants would join them in their Revolt against British rule. The answer was NON. Merci le Québec. A little more than thirty years after the U.S. Independence, in a war known as the War of 1812, this land’s peoples managed to fight off Yankee attempts to take us over.

Most of the battles fought and won during that war were waged along the shores of Upper Canada’s villages and hamlets from near Brockville on to St. Joseph’s Island. That war actually ended with our side having burned down the White House and giving them back the American land we had conquered from them. A study of that war shows us that we would have likely lost had it not been for the coming together of our land’s peoples. The Habitants du Bas-Canada (Québec) who came to fight side by side with their Maudits Anglais neighbours du Haut-Canada (Ontario) and even more significantly thanks to the help of the many Native-American tribes that fought with us, as our allies, to keep the Americans at bay.
(And we’ve licked the Yanks many times since. Most notably at a little Canadian game called hockey. A game that a Native-Canadian and long-time Toronto Maple Leaf Captain named George Armstrong reminded us was an adaptation of a game played by this land’s First Nations, long before the place was even known as Canada or any ofu su stuck oour tongue to a metal post. As an aside, it’s been said there are two things the Leafs must do to again win the Stanley Cup. First of all, as any good partisan des Canadiens de Montréal knows, the Leafs have to learn their English and change their name – it’s Leaves, not Leafs when there is more than one Leaf. Secondly, as any one of this land’s many First Nations’ people knows, and as the Leaves seem to have forgotten, it takes a good Native-Canadian, like George Armstrong, as their captain to lead them to the Cup.)
So where am I going with my pre-1867 ramblings about this land when we are beginning a year-long celebration of Canada’s 150th as a country? Well, I’m getting to what makes this country unique. The glue that keeps this land’s peoples together. The glue that makes this country tick.
I’m talking about the same reason the City of Vancouver chose to add a + sign to all of its signage and publicity about its year long Canada 150+ celebrations and activities.  The same reason it is challenging all municipalities from coast to coast to coast to also add the + sign to their Canada 150 posters and literature. (And if Trump leaves the U.S. in a shamble we can take it over and add another coast. It’ll be interesting to hear our Federal politicians say coast to coast to coast to coast. I’ll personally vote for the one who can yodel it.)
And why is Vancouver adding the + sign? Because of its recognition of the glue that has kept us together and will continue to do so, if we don’t cast it aside. Something that Canada’s leading public intellectual, John Ralston Saul calls “the originality of the Canadian reality”.  An energy and a spirit that has kept us together as a country both despite of and because of our racial, religious, linguistic, cultural and regional differences, to name but a few. To me it is inherent to this place’s land, lakes and the air we breathe. It boils down to the Aboriginal presence that has always been here. A presence that, I am sad to say, saw us start the last 150 years with the “empire ethos” that dominated the second half of the nineteenth century, – an era of self-proclaimed superior white men running empires “for everyone else’s own good”.  When it came to their treatment of this land’s Aboriginal people over the course of many of those years, as John Ralston Saul points out, consecutive governments struggled with the Empire ethos for a long time “… without even trying to rise above the prejudices of the day.”
The relationship between this land’s Aboriginal peoples and its European settlers was much healthier one during the 250 years prior to the last 150. It was the period when we listened to one another. When Native elders taught European settlers how to live in these climes, and in fact taught them the fundamentals of what a democracy is. A time when our European ancestors better grasped and respected our native elders’ teachings about spirit, energy and the paramount importance of the interrelationships between all entities. A time when we better understood the indigenous ways of thinking and their important contributions to the preciousness of the evolving nature of the “originality of the Canadian reality” that defines us, …and binds us.
To sum it up, a time when we were all better skilled at respecting and integrating rather than trying to eradicate or deny the validity of the different worldviews of others. A reality that our Supreme Court now incorporates in its rulings and one that all Canadians should covet, seek out to better understand, and most definitely celebrate.
Changing Canada 150 to Canada 150+ is a small gesture, yet one that can be so symbolically important a gift to the first peoples to have called this place home. And an equally important gift to all others who want the “originality of the Canadian reality” to continue on, at the heart of all of Canada’s actions in its quest to respect of the reverence of life, all life. At the heart of our Truth and Reconciliation journey.
Merci, Thank you, Miigwech, Ekosi, Nakuqmiik Vancouver.
Your Canada 150+ tagline “Moving forward together” says it all.
I hope all municipalities take up your challenge. If you agree, please let your municipality know.  Happy Canada 150+.