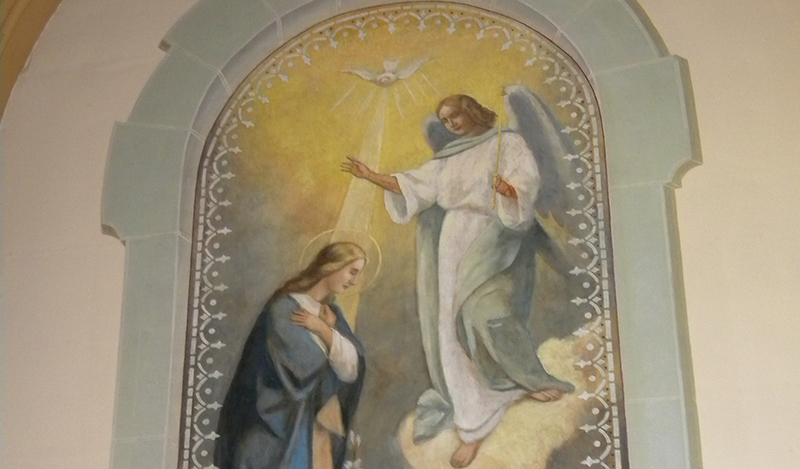 The restored canvas called “The Annunciation” was unveiled at Ste-Anne-de-Prescott Catholic Church at Christmas Mass. The work is by renowned religious artist T.-X. Renaud.

The parish of Sainte-Anne-de-Prescott has once again proven its commitment to heritage. At Christmas Mass, when the large country church was packed, the unveiling of a large centennial painting by renowned church decorator T.-X Renaud. Bishop St-Denis gave a PowerPoint presentation which focused on the significance of crèches around the world. During communion, the congregation enjoyed the sound of the church’s heritage Casavant organ as the organist played the famous Huron Christmas song.

The restored canvas, called “L’Annonciation”, has an important heritage value in the eyes of Ste-Anne-de-Prescott residents. It was painted in 1914 by the artist Toussaint-Xénophon Renaud (1860-1946), considered one of the great decorators of churches of his time. Renaud painted some 200 places of worship in Quebec, Ontario and the United States, but there are relatively few traces of his work today.

This canvas and a second placed in the other transept once displayed a frame of trompe-l’œil stones that gave the impression of looking through a window. This aspect was overshadowed in subsequent works, but, following a successful fundraiser, the original frame was able to re-emerge thanks to the work of expert artists who removed layers of paint hiding parts of the original artwork. 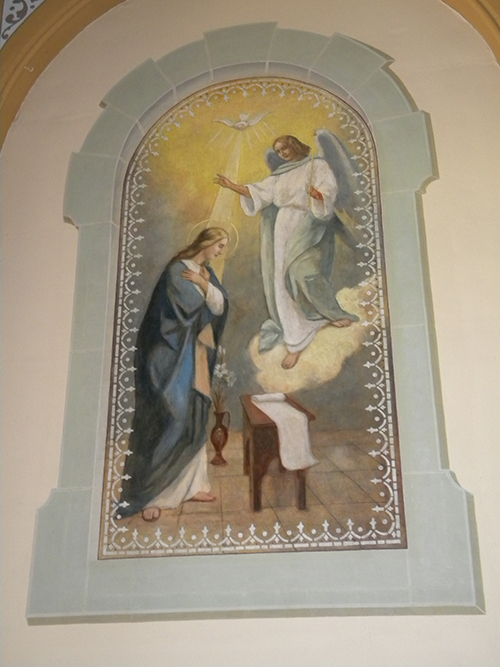 The restored “Annunciation” by T.-X. Renaud was unveiled at Ste-Anne-de-Prescott Catholic Church at Christmas Mass.

Most of the funds for the restoration of this painting come from the Pioneer Family Reunion Committee. The parish thanked the most generous individual donors: Lucie Brunet, David Sherwood, Jean-Charles Leroux, Michel Lalonde, Françoise Brunet, Rémi and Cécile Leroux, Damasse and Marielle Lalonde, Martine Leroux and Michel Prévost Of Ottawa). The parish appreciates the contribution of all the donors, many of whom preferred to remain anonymous.

One can discover the meaning of all the works of art covering the ceiling and the walls of the church, in the book, “Une église, un monument, une merveille. Histoire de l’église catholique de Sainte-Anne-de-Prescott,” which contains hundreds of photographs as well as descriptive texts explaining the symbolism and value of the church’s treasures. It is for sale at a cost of $ 20.

The Casavant organ, installed in 1897, is one of the oldest instruments of this type still used during the Sunday mass. The Royal Canadian College of Organists has designated it as a historic instrument. The Historical Organ Society in the United States awarded it a certificate of recognition, among only 362 organs throughout North America to receive this merit.
It was fitting to hear the Huron Christmas Carol, composed in Ontario in 1649, played on this historic instrument.

At a time when religious practice is diminishing, Sainte-Anne-de-Prescott remains a remarkable exception to the renewal of momentum in a place of worship that retains all its richness.

This article was submitted by parish volunteer David Sherwood. Find out more about Sainte-Anne-de-Prescott: www.ste-anne.ca