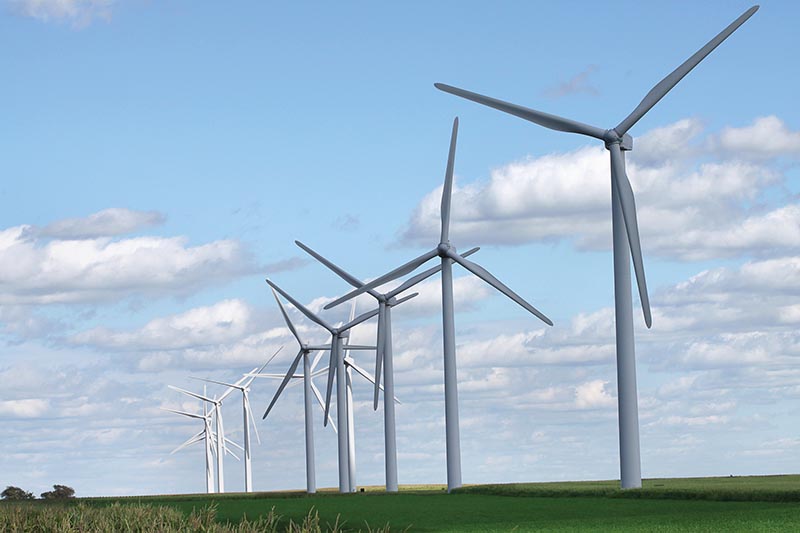 Last Tuesday the Montreal-based wind turbine company, RES/Renewable Energy Systems, held its first open-house in our area to promote its Eastern Fields project in St-Bernardin. The second one followed right after on Thursday. RES came, it saw, but my question to you is, did it convince you?

For, to convince you, try it did. But as my dear father once wisely counselled me in times like these Son, never ask a barber if you need a haircut! Ever the typical slow-learner it took me years of laboured thinking to understand this. I was even overjoyed the day I’d added my one bit to it in this way: “Yah! and especially when he’s the one doing the asking in the first place”. But my father had since passed away and I could never get to know what he’d have thought of that bit. Quick-minded he’d probably would’ve shot back and especially when he’s so insistent that it absolutely be done now!

For now, neither the Champlain nor The Nation municipality have any IWTs/industrial wind turbines and, as far as I know, neither of them has ever asked for any. But both have been actively, effectively, forcefully even, offered some. Given the sad historical and province-wide context of the IWT’s political file, it has been highly debatable just how active or even courageous our own local representatives have been vocal in subsequently resisting the process, even we’ve been hearing or reading elected municipal officers – in The Nation municipality in particular – repeatedly lament at length the loss of their power of governance in these matters through specific provisions of the Green Energy Act of 2009.
I call to the box of the accused our collective amnesia which, for over four years, has stood idle when this process was silently developing. We seem to have grown accustomed or forgotten or both that we would not find ourselves in this situation had it not been for that piece of legislature in the first place. Luckily not everyone remained silent on the night.

Just over a year ago, in September 2015, I was thrilled that The Review published a blurb of mine entitled at the time In Praise of Ordinary Citizens wherein I was detailing some of the actions I had witnessed first-hand as performed by the Save The Nation citizens’ group aimed at different levels in the difficult process of opposing such unsolicited and ill-advised implantation in our proud agricultural area. In this manner and just over a year later, borne by simple sound motives of basic democratic rights, I was again fortunate to be among those who pursued this mode of action all the way to Queen’s Park. Last Monday December 5th, our MPP Grant Crack courageously first stood up in the Chamber and read the Save The Nation petition asking that LRP 1 projects in our area be canceled just as they were suspended last September, the next LRP 2 phase of projects – which included in the St-Isidore area a second project of concern. The reason for this cancelation, you ask? As indicated by the Minister of Energy himself, Glenn Thibeault, Ontario enjoys a robust supply of electrical energy. Next, MPP Crack accepted to deliver to Premier Wynne over 800 letters – gathered in one short week alone – which people signed to express their disagreement with the present policy. MPP Jim McDonell for Stormont-Dundas-South Glengarry, also presented over 1200 letters from Concerned Citizens of North Stormont whose area is similarly targeted by the proposed IWTs of the Nation Rise project.

Now let’s just suppose you were wondering if you still needed that haircut – ‘cause the barber sure seems to think so. Let’s also suppose you’d decided to attend the open house hosted by RES like I did. You probably had some words still echoing around in your mind from the article which also appeared the previous week in this paper.

In it was mentioned the intention of the company to have the community see the project as it sees it – “a local source of pride and an asset … for decades to come.”

A local source of pride? I happen to be a staunch supporter of a certain local brand of beer which proudly celebrates the uniqueness of our centuries-old agricultural heritage in the area. It didn’t cost you or me a penny. It sits there for all to enjoy and we all applaud its well-deserved economic success. As an example of local source of pride, that little brewery, I can understand. But somehow having IWTs in our fields as a local source of pride makes it a harder sell, don’t you think? And as for being an asset … I know a few people do gain but I fail to see how we all gain from this. An arena is an asset for a community. So is a school, a doctor’s clinic. We all turn to them. We all choose to settle nearby … ‘cause its an asset.

I am glad I came to the open house last week. I saw many panels. One of them presented a greater interest. People had known for some time that the project would consist of ten industrial wind turbines and they’d been waiting a long time to finally view this particular panel, the one showing the location of these. Finally! After all this wait, I counted them … but the cat told the mouse that these sites were not definite… It’s part of a process , you see.
So, I came back home. And I saw how it is that, in this process, some of the most important things to be learnt from reading the panels on display sprang exactly from the ones that were kept hidden: one, the smarter alternatives to ever higher, ever bigger towers and all the other up-coming new technologies in the field – it was never mentioned that five or ten years down the road that technology might be disadvantageously dépassée; two, the cost of building the infrastructures needed for this form of electricity, especially in the way these are already impacting on the economic context in Ontario which is something you and I are already paying way too much for and which can only keep on increasing as long as this elephant-in-the-room remains hidden, unseen – except when you and I view our monthly hydro bill, of course; third, the blinds being pulled over your eyes and mine when promoters list all the incentives that will be showered upon us – but only if we refuse to see that this is the oldest trick in the book, just another round-about way of buying us with our own money; fourth, no mention whatsoever of the contrary views from the strong opposition mounted by the other political parties who, come the next election, would most likely abandon this present course on the energy file – now me thinks I am starting to see why this barber insisteth so much that we best hurry and get a haircut now and preferably this Pompadour style of peignure; and lastly, what was never intended to be on those panels: the simple truth – could all this be solely driven by honest concern for the environment?

So, there you have some of it. In the past year-and-a-half Save The Nation has had to ward off false accusations of NIMBY-ism (not-in-my-back-yard). Now with ordinary but very dedicated citizens from WCO/Wind Concerns Ontario it is now sounding proper alarms of EBP-ism (everyone’s back pocket) to all Ontario citizens who still care about reasonable prices for the electricity we pay and which foster economic growth, who stand ready to do something for our beautiful province in its present time of need, particularly in this complicated but common-sense file.
I am not a barber. I was not convinced! Haircut anyone?