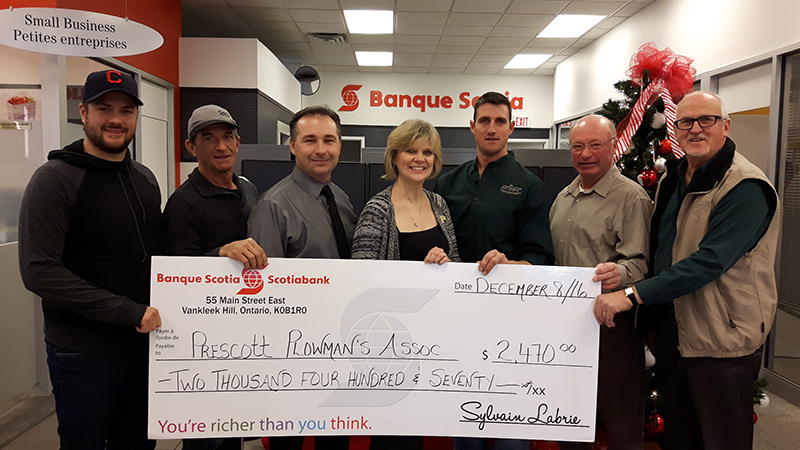 Members of the Prescott County Plowmen’s Association accepted $2,470 last week from Scotiabank as part of a matching funds donation for the 2016 edition of the Prescott County Plowing Match. The association has been raising funds to purchase two new plows. President Glenn Conway said that having a two-furrow hydraulic plow and a horse-drawn sulky plow were incentives to encourage young participants.

“We have these plows right at the site for people to use,” Conway said, adding that the day before the annual plowing match, there is always a practice, or “coaching” day to help up-and-coming participants.
In 2017, the Prescott  County Plowing Match will take place on September 9 in St-Isidore on Marc Bercier’s farm.
While Conway is president of the association, Richard Sauvé is vice-president, Pierre-Luc Sauvé is secretary and Justin Lavigne is treasurer. Brunet Lecot is in charge of publicity and fundraising. If you would like to contact the association or make a donation, call Glenn Conway at 613-677-6744 or Richard Sauvé at 613-551-5144.