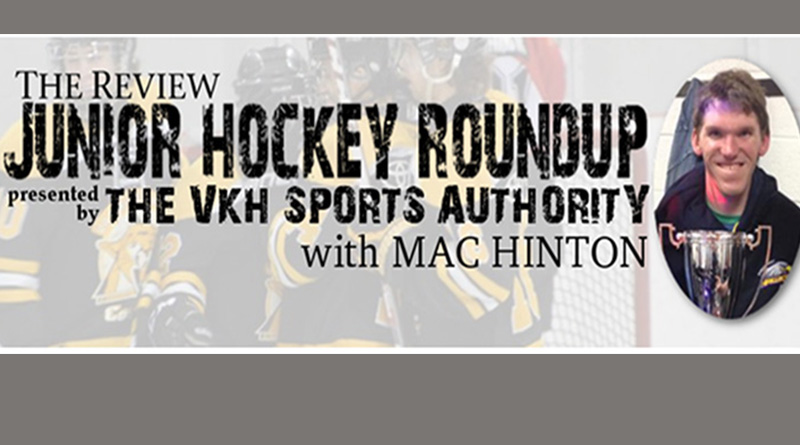 The Hawkesbury Hawks continue to hold on to second place overall in the CCHL, two points up on the Kemptville 73’s. After this weekend’s action, Hawks superstar Charlie Levesque now sits atop the league scoring race with 47 points (17G, 30A), three points up on Cornwall’s Nick Lalonde and Kemptville’s Alex Row.

Matthew Chan got his first start since November 18 last Tuesday evening in Smiths Falls against the Bears. Smiths Falls had bested the Hawks 6-4 three nights earlier in Hawkesbury. Chan stood tall in nets stopping 30 of 32 shots he faced, leading the Hawks to a 5-2 win.

Friday evening the cellar dwelling Pembroke Lumber Kings were in Hawkesbury. Hawkesbury Coach Rick Dorval continued with the hot hand in nets giving Matthew Chan back to back starts. Pembroke got to Chan early making it 1-0 Lumber Kings only 1:05 into the first period. Pembroke actually outshot Hawkesbury 14-12 in the first period. Thankfully for Hawkesbury, there were three periods to play. The Hawks took control in the second and the third scoring five unanswered goals to win the game 5-1. Chan ended up stopping 35 of 36 shots that went his way. Brett Everson and Charlie Levesque led the offensive for the Hawks, each racking up three points in the win.

Saturday night the Hawks were on Walkley Road at the Jim Durrell arena taking on the Ottawa Jr. Senators. The Senators hold the second-best winning percentage in the league (behind the first place Carleton Place Canadians) but have played five fewer games than the Hawks. The game was a tight checking affair, with neither team really able to bust through offensively. Brett Everson gave the Hawks the lead in the first period. Ottawa’s Jaren Burke scored back to back goals in the second to give the Sens the lead. Ottawa would add an insurance marker in the third to put them up 3-1. Bruno Cheff scored with 3 minutes to go to cut the lead to 3-2 but that was as close as they would get. Matthew Chan got his third straight start in the losing effort.

Cougars sit middle of the pack

Sunday evening the Cougars were in a shootout with the Gatineau Hull-Volant. The Cougars won 6-4 with Marc-Antoine Doyon and Riley Sauve leading the way with 2 goals and an assist for each of them. Vassall was back in nets for the win.

Offensively Maxime Emond (20 points), Charles (19 points) and Marc-Antoine Doyon (19 points) have been driving the bus for Vankleek Hill this year.