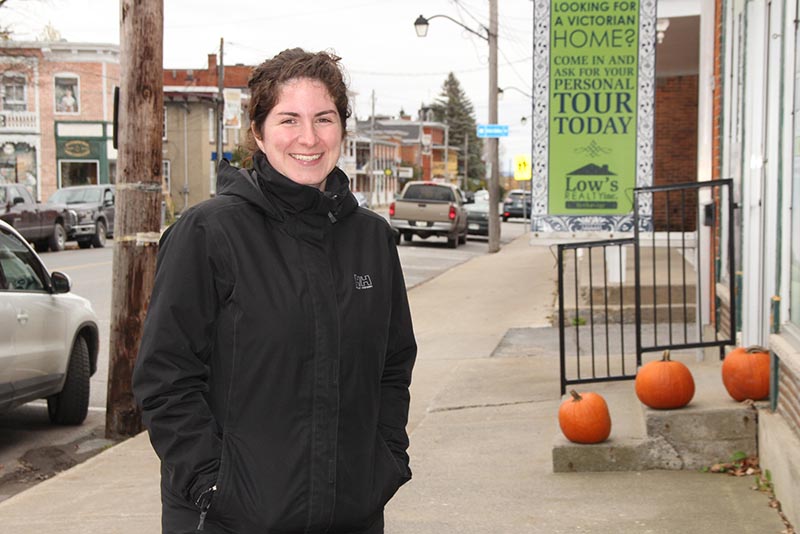 Vicky Jean-Louis is seen outside of her new cold-pressed juicing store, which will open in Vankleek Hill in early January. (Photo: Tara Kirkpatrick)

The Vankleek Hill Business and Merchant Association (BMA) is promoting local shopping with a $3,000 grant from the United Counties of Prescott and Russell.

The association is airing radio ads on VankleekFM, print ads in The Review, and has hired local photographer Jan Amell to take portraits of the owners of local businesses. Those pictures will be used in blog posts promoting members of the BMA.

The issue of local shopping hits close to home for BMA president Vicky Jean-Louis. In about a month she will open a new business, Golden Hill, on Main Street in Vankleek Hill. “If nobody comes in my shop, for sure it’s going to be closed in a few months,” she said. The store will sell cold-pressed juice and coffee.

Jean-Louis says she understands why people don’t shop locally – with everyone leading such fast-paced lives, it’s often easier just to go online. The campaign will try to emphasize the effect that spending even some money locally – buying a few gifts locally during the Christmas season, for example – can have a big effect. “One hundred dollars per person can change the whole economy out here,” she said.

Jean-Louis, who owns a branding company, is donating her time to do the graphic design for the campaign. Louise Stephenson, owner of Vankleek Hill’s “Zudio” Zumba studio and a member of the BMA executive, is similarly donating her time to translate and proofread for the project, said Jean-Louis.

The BMA has produced radio spots like this one promoting local shopping. They are running on VankleekFM as part of a larger campaign.